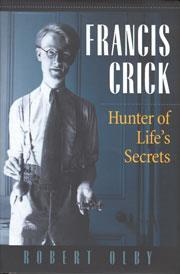 James Watson famously began his bestseller The double helix with the comment: ’I have never seen Francis Crick in a modest mood’. However, in addition to self-confidence, the ebullient humanist Crick (1916-2004) displayed great originality and powers of concentration, ability to organise and present information, and a knack of deriving, after prolonged discussion, solutions both to his own puzzles and sometimes to problems that other people thought were theirs. Aged 30, Crick was a fairly clever physicist who might well have become a career civil servant. Within a few years, he was engaged in research that was awarded a Nobel prize. Moreover, at around 60 he had the experience and perception to advance into neuroscience and the study of consciousness.

Olby, a science historian with academic experience in the UK and the US, first met Crick in 1966 and wrote extended accounts during the 1970s of the background and resolution of the DNA structure. In his scholarly biography, Olby stresses the value of two underrated stages in Crick’s scientific education.

During seven years as a Royal Navy scientist, Crick had outstanding academic colleagues who became individual friends and furthered his unorthodox career. The Strangeways Laboratory, Cambridge, 1947-1949, formed a preamble to studying ’the secret of life’; the mundane viscosity of cytoplasm project provided biological microscopy experience, reading time and access to Cambridge scientists. The formative pre-Cambridge years - Northampton, London and Havant - and the mature years at the Salk Institute, California, together take up one third of Olby’s book.

Readers content with a shorter narrative of Crick’s life without index or references can appreciate Matt Ridley’s authoritative biography Francis Crick: discoverer of the genetic code  (2006).

Olby has compiled a substantial but enjoyable biography with 50 pages of references. Pen portraits of 70 of the principal characters are a valuable aid in this fine exploration of a remarkable mind.