Joseph Priestley: friends and foes - remarkable lives in an age of revolution

Joseph Priestley: friends and foes - remarkable lives in an age of revolution 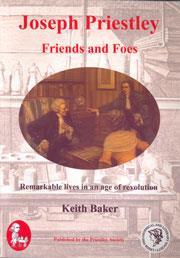 Priestley kept in touch with a remarkable array of friends - ’some of the best and wisest men’. The Priestley Society has capitalised on his interactions with diverse renaissance men in the Age of Enlightenment with this entertaining survey of contributors to science, religion and politics. Baker deftly sketches the background of a time, not just of industrial and scientific discovery, but also of intense religious and political controversy.

His most notable sympathiser was the creative transatlantic polymath Benjamin Franklin who became Priestley’s mentor and confidant. Contemporary chemists might sympathise with Priestley’s appeal to Franklin: ’the expense of my experiments is necessarily considerable’. Thomas Cooper collaborated with Priestley in England on bleaching and dyeing and helped publicise his discoveries after Priestley’s death in 1804 in the US, where Cooper became a chemistry professor.

Less well known was the statistician Richard Price, who published in the Royal Society his own and the deceased Thomas Bayes’s probability theorems that underpin insurance and search engines. Through Price, Lord Shelburne became Priestley’s patron, 1772-1780, the basis for the Bowood House discoveries celebrated by the RSC.

After his emigration to the US in 1794, Priestley was welcomed by the first President, had a friendship that soured with the second, and became science education adviser to the third, Thomas Jefferson.

Priestley’s devotion to dissent and utilitarianism, and support for American independence and revolution in France, led to vigorous controversies with formidable opponents, including King George III, Prime Minister Pitt, and Priestley’s contemporary, Bishop Samuel Horsley. Of most interest to chemists was the aristocrat Antoine Lavoisier; though the two barely met, their arguments over phlogiston and the New Chemistry stimulated both. While summaries of the lives, and Priestley links, of these friends and foes should suffice for most readers, references are given to fuller biographies.

Overall, Baker illustrates the vital stimulus of friendships, rivalries and disputations to this ’polymath born with a perpetual motion pen’.