Science for all. The popularization of science in early 20th century Britain

Science for all. The popularization of science in early 20th century Britain 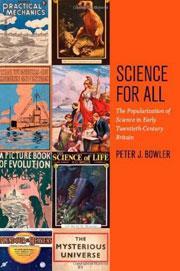 The now very familiar phrase ’science for all’ was first coined in 1877 by the geographer and journalist Robert Brown when he was compiling a cheap monthly-parts serial for the self-education of young readers and their families. Continually reissued and improved, the purchase of Science for all  by school libraries and science teachers ensured that it played a vital factor in the creation of the General Science movement during the first world war and after. This was but one, very successful, attempt by Victorian scientists to raise public interest in science.

In his new, ambitious book, Peter Bowler (who is best known for his writings on the history of evolution and the biological sciences) raises the question whether scientists turned their backs on popularisation once they had achieved professionalisation around 1900. His conclusion, reached after an exhaustive and fascinating survey of topics and themes in popular science, publishers and their publications, and of the scientists and other experts who wrote for the press, is that writing for a general audience remained a serious activity. Given that the average annual salary of a junior scientist was less than ?200, an extra ?50 per year from popular writing was a considerable incentive! Providing it did not interfere with one’s teaching and research, it was considered a defining activity of being a scientist.

Although not particularly highlighted by the author, chemists clearly played a role in popularisation even if, unlike Arthur Eddington, James Jeans and Lancelot Hogben, they failed to write best-sellers. This is best shown in an appended biographical register of authors active between 1900 and 1945 which is also available in expanded form on the publishers’ website.

Despite the density of his information, Bowler’s book is extremely readable. It offers nostalgia and inspiration, as well as a foundation for future research on 20th century popular culture.