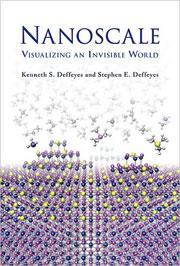 The molecular world is too small to be seen with the naked eye, and so Nanoscale: visualizing an invisible world sets out to reveal, using magnification, the wonders of the nanoscale for a general readership.

The Architecture of molecules (1964) by Linus Pauling and Roger Hayward started a trend of books on molecular wonders co-authored by a scientist and an illustrator. This book follows this successful pattern with text written by Kenneth Deffeyes, emeritus professor of geology at Princeton University, US, best known as author of Hubbert’s Peak: the impending world oil shortage  (2001) and Beyond Oil: the view from Hubbert’s peak (2005). The computer generated illustrations (based on x-ray diffraction data) are by Deffeyes’ illustrator and designer son, Stephen. George Whitesides’ work in conjunction with Felice Franckel, as shown in such books as On the surface of things (1997) and  No small matter: science on the nanoscale (2009) continues the genre.

Nanoscale consists of 50 short sketches drawn from chemistry, biochemistry, mineralogy and technology, well-written without too much technical detail. The anecdotal asides on people and interesting factual information, with the excellent accompanying illustrations, makes the book a joy to read. The structures selected range from the simple: air, ice and water; through to the more complex, such as haemoglobin, chlorophyll and faujasite; to those involved in such applications as lasers, supercapacitors, fuel cells and flash memory devices. Along the way the reader will pick up a lot of information on crystallography as a technique to explore molecular structure.

If you are looking for a tour through the nanoscale world, this book is a good starting point.