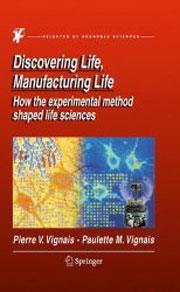 The book, translated from an original French text by Martha Willison, traces through history the development of the scientific method, whereby a theory is tested by the design of an experimental procedure, and conclusions drawn based exclusively on results. It traces the roots of the experimental method, especially in the life sciences, from ancient Greece to the Renaissance.

The experimental method started in the 17th and 18th centuries with figures like William Harvey, Robert Boyle and Francis Bacon. From then it was the basis of the explosion of progress in the life sciences in the 19th and 20th centuries, through biochemistry, biotechnology and molecular biology. It is more of a philosophy of the scientific method - as an outworking of determinism as first expounded by Claude Bernard, the French physiologist. The authors of this book obviously consider Bernard as the father figure of the experimental method in the life sciences - his discourse, An Introduction to the Study of Experimental Medicine (1865), describes what makes a sound scientific theory and what makes a good scientist.

There is much that would be described as chemistry as many of the people involved crossed over scientific boundaries.

This book is not an easy read - the layout is a bit staid, somewhat lacking in good illustration, and the language a bit stilted, perhaps as a result of being a translation.