The force be with you

Molecular forces and self-assembly in colloid, nano sciences and biology

Molecular forces and self-assembly in colloid, nano sciences and biology 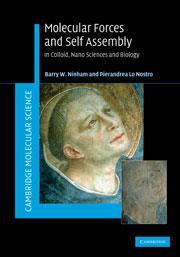 ’To say that the developments detailed in this book are radical is to put the matter mildly’. This quote from the preface, along with the promises on the back cover of ’questioning assumptions’, unearthing ’flaws’ and presenting ’new ideas and theories’, had wetted my appetite for this book.

Sadly, I came away from it somewhat disappointed. The first part of the book (250 pages) covers molecular forces including electrostatic forces in electrolytes and Hofmeister effects. The second part of the book, comprising the final 100 pages, deals with self-assembly across a range of systems, including micelles, emulsions and lyotropic phases.

The book requires the reader to have an initial good working knowledge of modern physical chemistry; but aims to try and convey complex ideas, without wanting to overcomplicate things and without wanting to overburden the reader with mathematics. While, a worthy aim, I found that the book struggled to do this. Some areas, such as Hofmeister effects, were explained well. However, for me, some chapters seemed superficial and not particularly helpful for new students to the area.

In the midst of an explanation, the authors would sometimes jump away to make reference to another phenomena or an obscure book reference, quotation or anecdote. Sweeping judgements appeared at regular points. The statement that ’this best potential still cannot explain the density maximum at 4?C and why ice floats on water’ is some years out of date. The idea that ’many published data on microstructures have to be viewed with a jaundiced eye’, and ’however the simulation business develops, its major sin is that it is incredibly boring’, left me cringeing. As such, these undermined my enjoyment of the book and my confidence of explanations in areas where I had hoped to learn something new.