The planet in a pebble: a journey into Earth's deep history 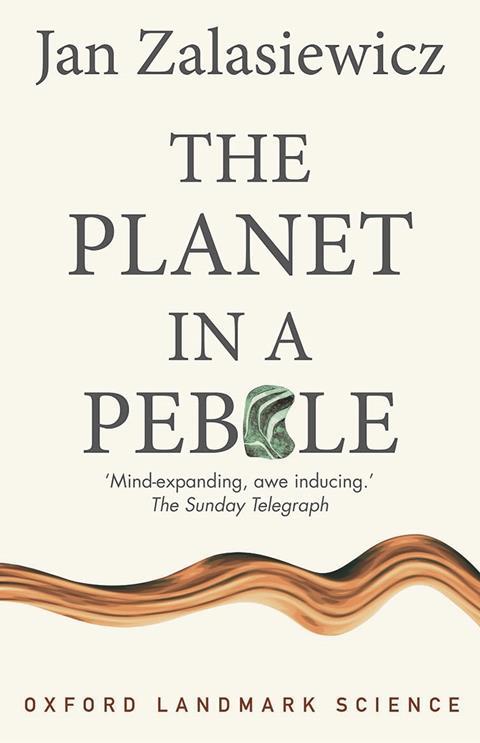 In 1848, Michael Faraday delivered his successful series of lectures on breaking down that most ordinary of objects, the candle. He demonstrated to the audience how chemistry and physics worked hand in hand to produce light, something which we often take for granted.

Echoing Faraday’s standout lectures, Zalasiewicz draws us into science by considering a pebble. This unremarkable pebble, plucked from the thousands that litter the Welsh coastline, becomes his vehicle for leading us on an almost improbable journey of the creation, evolution and subsequent destruction of our universe.

Zalasiewicz invites the reader to consider vast epoch-defining aeons. Out of the darkness, we travel from the formation of the pebble’s constituent elements following the big bang, to the wonders of a shallow Silurian sea whose inhabitants are frozen in crystalline beauty within the pebble and beyond. In a friendly and accessible tone he shows how the interplay between physics, chemistry, biology and geology forms our world. He introduces techniques such as radiocarbon dating, mass spectrometry and scanning electron microscopy and explains how they help us to uncover what happened when elements decayed over time, or as fossils developed.

Despite Zalasiewicz’s wonderful storytelling, a book on this topic would have benefitted from more illustrations and graphics. Four colour pages are included in the centre of the book which mainly depict rock formations. There are a few other images throughout, and these would be improved with some annotation. It would have been beneficial if the movements of the tectonic plates from the Cambrian age to today were depicted. Then I might better appreciate how our pebble was transformed along its journey as Wales moved up from the southern hemisphere.

Overall, The planet in a pebble will appeal to anyone with a prior appreciation of general science, as it brings learning from the different scientific disciplines into focus together. Those without a science background will also find it enjoyable overall, though they might encounter barriers in some parts where scientific terminology and conventions are used without greater explanation.