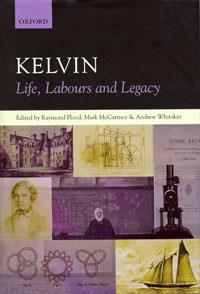 If one plans to occupy an academic chair for 53 years, it helps to start early. William Thompson (later Baron Kelvin), born near Belfast in 1824, attended his father’s lectures at Glasgow University as a boy, matriculated at ten, and, after the Cambridge Mathematical Tripos, was appointed to the Natural Philosophy Chair at Glasgow aged 22. Kelvin published 660 papers and 60 patents, received Nobel nominations from several Laureates, accepted 21 honorary doctorates, and became President of the Royal Society. He was greatly respected in his lifetime and at his death in 1907 (Chemistry World  , December 2007, p 60).

In the later 20th century, Kelvin’s biographers, notably Crosbie Smith and Norton Wise (Cambridge University Press, 1969), recognised that commentators were less sympathetic to Kelvin’s view of the complementarity of science, engineering and industry. Moreover, as relativity and quantum theory emerged, his contributions to 19th century classical physics tended to be overlooked. Flood, McCartney and Whitaker have assembled physicists, mathematicians and historians, several from Ireland and Scotland, to provide a useful reassessment of Kelvin’s career and achievements. Their 16 self-contained essays describe his education, his friendships and interactions with contemporaries (including Clark Maxwell and Michael Faraday), and his energetic contributions to fields as diverse as statistical mechanics, delicate galvanometers, and submarine telegraphs (Chemistry World  , December 2007, p60).

Andrew Whitaker highlights Kelvin’s crucial contributions to science, engineering and invention, especially through the Atlantic cable and mariner’s compass, which brought immense wealth. Another legacy was a consequence of the 1845 summer spent in Victor Regnault’s Paris chemical laboratory; Kelvin’s Glasgow students were the first to experiment rather than merely watch demonstrations (although his chemistry colleague Thomas Thomson already had a laboratory).

Apart from a London house, Kelvin built a retirement mansion and bought a 126 tonne yacht; he met and married his second wife on a cruise to Madeira. As now, combining scientific distinction with financial prosperity can incur disapproval. This collection celebrates Kelvin as a pioneering entrepreneurial academic; even the yacht has a contemporary resonance. A picture of the schooner, taken from Smith and Wise’s biography, forms a nice link in the form of an implied analogy with Craig Venter (Chemistry World  , July 2008, p48).