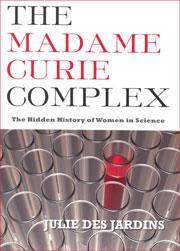 The Curie complex is defined as an inferiority complex observed by Margaret Rossiter (Marie Underhill Noll Professor of the History of Science, at Cornell University, US) in women following the Curie tours of the US in the 1920s. Women felt they could not measure up to the mythical figure of Marie Curie created in the American media, which is hardly surprising as it is somewhat of a moving target as this book relates.

This book attempts to offer an insight/slant on prominent women in science by examining not only their scientific endeavours, but also their private lives. There are nuggets of information here which I have not previously read, which lifts the book from the normal kind of biographical account.

The Madame Curie complex  is well researched with a bibliographic part after each section and is divided chronologically into three sections covering the period from 1880 up to the present day, taking in the Manhattan Project and astronomy in which a lot of ’invisible women’ worked. There is quite a heavy American bias in the choice of women biographies which might be expected but all the usual European suspects are here including Rosalind Franklin, Lise Meitner, etc.

I picked up this book wanting to be inspired and empowered by the stories of ’women in science’, but it left me feeling somewhat disillusioned and deflated as it continually appeared to prove that ’the complex’ was not just in women’s heads but is still seeping through the scientific establishment and society at large even today in what many of us regard as enlightened times. This is not the fault of the book, but it does not make for easy reading, especially if you read the last few pages of the author’s own struggle to write it in the first place.