Aaron Wheeler is the director of an interdisciplinary research group at the University of Toronto in Canada. The group develop lab-on-a-chip techniques for applications in biology, chemistry and medicine. 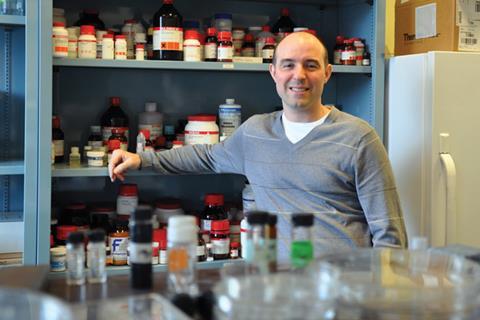 You recently reported an exciting technique that can screen algae grown under different wavelengths with the aim of generating more efficient biofuels.1 Can you tell me more about this work?

Sure, this was the first time we have developed a method for the area of renewable energy. I had a student, Steve Shih, who is now a postdoc at the Joint BioEnergy Institute in California, who became interested in the idea that we can cultivate algae to produce biofuel. Of course this is an idea that has been around for a while.

So, in looking at the problem it seems that the biofuel we can collect from algae does not have the required energy density relative to the cost needed to extract and generate fuel, to compete with non-renewable resources. There are ongoing efforts to develop ways to encourage algae to generate more lipids. The idea is that the algae generate stores of lipids that we can then extract and refine into fuel.

We saw an opportunity; we thought we might be able to build a microfluidic device that could rapidly screen for conditions that folks haven’t looked at before just to see if we could find some conditions that encouraged the algae to produce more lipids. A lot of time we start these projects but don’t end up with an exciting result, but this one was really exciting in that we believe we have identified a brand new phenomenon which is that, at least for this particular algae, if you culture them under yellow light they experience some sort of stress which causes them to increase lipid production!

I read you saw a four-fold increase in lipid production when you used yellow light. 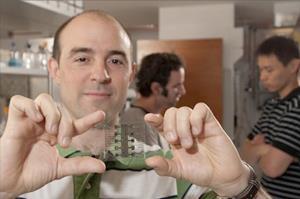 With regards to the actual device that you designed and observed this with, would you think that it could be useful for groups that are developing algae biofuels?

Absolutely. When we write papers we spend a lot of time thinking carefully about the method section to pack in all of the details, so I think our device would be a great place to start for other groups that are interested in doing these types of screens. More generally we think the idea that wavelength is important for algae production is interesting, folks might be able to take this and run with it for whatever technology they are using.

Is there anyone else combining microfluidics with energy research?

In general I think energy applications are a great new frontier for microfluidics. Microfluidics has for so long been focused on biomedical applications and I think energy is a place that we have some tools that are going to be useful. Recently, a group from Texas A&M did a very interesting algae screening experiment using a very different technology to ours.2 I believe they were looking at different intensities of light and were evaluating how light affected algae growth and biomass accumulation and that kind of thing. We just really liked that paper and I think we will see more and more microfluidic applications for energy in the coming years, perhaps from folks like David Sinton at the University of Toronto and David Weitz at Harvard University.

Within the field of using microfluidics to look at algae, what are your thoughts on what might be the biggest challenge?

Well I am not an algae expert by any means. There is a community of experts in that area, but my sense is that community is much smaller than the community of people that are interested in biomedical applications, for humans. So it’s perhaps a little bit more of a stretch for ‘tool builders’ like us microfluidics people, to find the algae people. That is one of the reasons I was enthusiastic to publish in Energy & Environmental Science – this allows us to put these results in front of the researchers who may not know much about microfluidics in the hope that the results might be useful to them or that they might even be interested in doing some microfluidics-themed research themselves.

You mention that it was one of your students that got you interested in algae. Is your group doing more work on it now or have you moved on to other projects?

Well we are doing a little bit of work with it, I kind of have a very diverse group that works on what they are interested in and I have a current student who is interested in algae but he is also interested in many other problems.

Over the years I have found that the more I try to control what the group does the less we do interesting things! I really enjoy tapping into the students’ passion for what they are working on.

Are you working on anything particularly interesting at the moment?

There is a popular move in our field at the minute to develop organs-on-a-chip, the idea being that if we could do screening for pharmaceuticals in an environment that more closely mimics living systems we will be able to more efficiently choose the pharmaceuticals that we use. And as you may know the drug discovery business is very expensive and inefficient and this is a big problem.

We recently  teamed up with tissue engineer, Michael Sefton at the University of Toronto and developed what we call microfluidic liver organoids.3 These are free-floating masses of liver cells and other cells that we can culture and use to evaluate pharmaceutical responses. Several members of the group are working on organs-on-a-chip or 3D tissue culture-on-a-chip. We are one of the few groups that is using the digital microfluidics paradigm where instead of microchannels, we have an array of electrodes which (of course) has some disadvantages and some advantages relative to other techniques, but we think it works quite nicely for this application.

Is there any other microfluidics research that has caught your eye recently?

Well, I just returned from selecting abstracts from the Miniaturized Systems for Chemistry and Life Sciences, the biggest and oldest conference in the field of microfluidics, and the field is very much interested in identifying what are called circulating tumour cells as a less invasive method for identifying patients with cancer. Rather than going in and surgically sampling tumours, scientists are looking for the proverbial needle in a haystack and looking for the one cancer cell that happens to be floating in the bloodstream among the billions of other cells in the blood stream, and that’s an area where microfluidics has some advantages and it’s become a really hot topic.

Microfluidics is an exciting field to work in. From the technology perspective it’s particularly fun as it really gives you chance to dabble in a wide-range of problems!