Allow me to demonstrate

As Peter Wothers gets ready to deliver this year’s Royal Institution Christmas lectures, Sarah Houlton finds out he’s had a lifetime of preparation

Peter Wothers has been obsessed with chemistry ever since playing with magnets and iron filings as an eight-year-old at primary school. Over three decades later, his passion for the subject remains undimmed. ‘I rapidly got through three different chemistry sets carrying out experiments in my bedroom,’ he recalls. ‘I used a spirit lamp to heat things up – it was great fun!’ 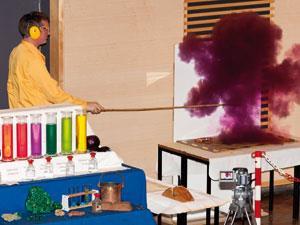 By the time he reached secondary school, the smells (and risk of burning the house down) had got a little too much for his parents so he set up a makeshift lab in an outhouse on the farm where he lived. During the summer holidays, he worked for a lab supplies company and furnished his own lab with the equipment and chemicals he received by way of payment. ‘I ended up with quite a substantial lab, complete with centrifuge, balance, Quikfit apparatus and even a Soxhlet extractor!’ he says.

At school, his chemistry teachers struggled to teach him anything as he’d already covered it at home using his lab and a stash of second-hand chemistry textbooks. But they were supportive, and entered him for the International Chemistry Olympiad.

‘I was selected for the team representing the UK at the finals in Hungary,’ says Wothers. ‘It was the first time I’d been abroad – ironically, I also had the chance for selection in the GB team for the world junior rowing championships, but the trials clashed with the Olympiad!’ His rowing partner, Tim Foster, went on to win gold at the Sydney Olympics in Australia with Steve Redgrave, Matthew Pinsent and James Cracknell. ‘[Tim’s] talent pulled me along!’ Wothers claims.

There was never any doubt Wothers would choose chemistry at university – anyone who spends a French exchange trip finding out the French versions of chemical names is clearly single-minded. He studied at the University of Cambridge, UK, and stayed on for a PhD in physical organic chemistry. When a teaching fellow role became available as he was writing up, he jumped at the chance. ‘I was tasked with redesigning the physical chemistry practicals, which hadn’t changed for years,’ he says. He started lecturing, too, and now delivers five courses a year to students at Cambridge.

Chemistry outreach also fills much of his time. From his early days showing off makeshift experiments to schoolmates, he now gives regular demonstration lectures that convey scientific principles along with plenty of flashes, bangs and explosions. ‘At the first chemistry open day at Cambridge about 15 years ago, I sat in the audience at a lecture, thinking how I could do better – I’d been planning demonstration lectures in my head for years!’ he says. And ever since, he’s given a new lecture at Cambridge science week every year, to a total of around 4000 people across eight performances. 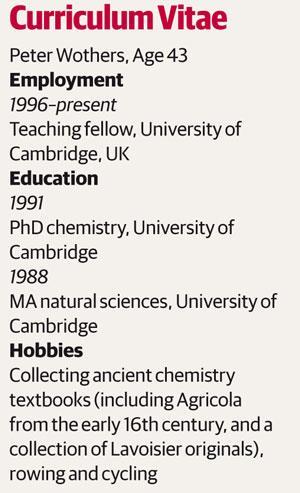 He’s also still involved with the Olympiad. ‘Around 4000 students enter the UK competition, but it’s not just about selecting the final four – it’s about getting the message of chemistry out to sixth formers,’ he says. ‘It’s quite a step up from A-level work, and it’s great to get topical subjects into the exam, such as the synthesis of Tamiflu during the bird flu epidemic, and x-ray fluorescence spectroscopy, which was used to find a hidden Van Gogh painting underneath another work.’ He now chairs the steering committee for the International Chemistry Olympiad, having been one of the drivers of the first UK-hosted event in 2009, and he also runs an online chemistry quiz – the Cambridge chemistry challenge.

Over the years, Wothers has taken his demonstration lectures to a wider audience, with trips to countries as diverse as Greece and Australia, and this year he will give the Royal Institution Christmas Lectures, televised on BBC Four. ‘There’s been a lot of physics and biology on TV recently, so it’s great chemistry is getting a look in,’ he says.

The theme of his three lectures is ‘The Modern Alchemist’, with lectures on air, water and earth. ‘It’s a shame there wasn’t a fourth lecture for fire, but there will be plenty of it in the other three!’ he assures. ‘I’m really looking forward to it. As I’ll have more resources, I’m hoping to do experiments on a scale I’ve not been able to before. All I ever wanted to do was chemistry experiments, and that passion has stayed with me – now I just have a bigger chemistry set. And an audience!’