For students torn between taking a gap year and doing further study after their first degree, a European master of science could offer the best of both worlds. Designed to encourage researcher mobility, participants study in at least two European countries during these two-year taught master’s courses. 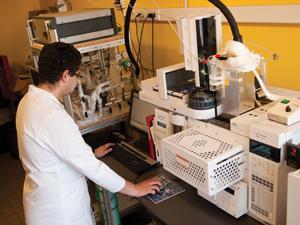 The advanced spectroscopy in chemistry master’s, for example, offers study opportunities in five different European countries: France, Germany, Italy, Finland and Poland. As well as experiencing a variety of countries, the course offers students a wider selection of topics than a master’s degree at a single institution. ‘The different universities are specialised in different fields of chemistry,’ explains course coordinator Sylvain Cristol, who is based at University of Lille 1 in France.

The course consists of four semesters spread over two years. For the first year, students study in either the University of Lille 1 or the University of Leipzig. ‘The first semester is exactly the same in both universities,’ explains Cristol. The basics of magnetic resonance, mass spectroscopy, optical spectroscopy and diffraction techniques are taught. The topics then vary depending on the student’s location for the second and third semesters. In the final semester, the students also complete a research project.

The main entry requirement is an undergraduate degree in chemistry, biochemistry, physical chemistry or physics. The course is taught in English and therefore a basic grasp of English is also required. ‘To work in research you need to speak English,’ explains Cristol. From an average of 100 applicants each year, approximately 20 students start the course.

Since the course began in autumn 2006 it has attracted students from all around the world. The highest numbers so far come from France, China and India, with a roughly equal number of female and male students.

A scholarship scheme funded by the University of Lille 1 is available for up to four exceptional candidates each year. From 2008 to 2013 the course was supported financially by the EU’s Erasmus Mundus mobility programme, which aims to enhance the quality of European higher education and to promote understanding between cultures. A new application to Erasmus Mundus is currently being prepared.

‘The natural outcome of our master’s programme is to start a PhD,’ says Cristol. Of the students who graduated between 2008 and 2013, 97 (out of 103) have provided Cristol with details of their next steps. ‘77 took PhDs, and among those roughly 40% were within one of the universities of the network, 50% stayed in Europe but in another university and 10% went outside Europe,’ he says. A further 11 alumni have positions in industry.

Indian Kiran Chereddy took the course from 2010 to 2012, following an undergraduate degree in pharmacy. ‘The training facilities and research opportunities in this course are among the best in the world,’ he says. The mobility of students between different European universities is a great asset for the circulation of knowledge and personal development, he adds. Chereddy is now working towards a PhD at the Catholic University of Louvain in Brussels, Belgium. ‘My current research is closely linked to my master thesis topic,’ he says. ‘This helped me to start my PhD research immediately and gain good momentum within three months.’

Belgian student Siewert Hugelier is also hoping the course will kick start a PhD after he finishes this summer. ‘I plan to [work with] with one of the professors from Lille,’ he explains. Hugelier, who already has an undergraduate degree and postgraduate master’s degree in chemical engineering, was drawn to the course’s ‘pick and choose’ approach. ‘I can focus on courses that I like and I don’t have to take any that [aren’t relevant] to me.’