Because they're worth it

From R&D to formulation, safety and manufacturing, L’Oréal is full of chemists. Emma Davies talks to the people behind ‘the science bit’

Martin Josso is the ‘sun chaser’ at L’Oréal. At least that’s the title given to him in the French cosmetics and beauty company’s new report, Here comes the science bit. Josso is a head of L’Oréal’s suncare laboratory in Paris. ‘Nicknames are not a tradition in our research centre. If I had to choose one, maybe the “sun tamer” would be more appropriate,’ he jokes. 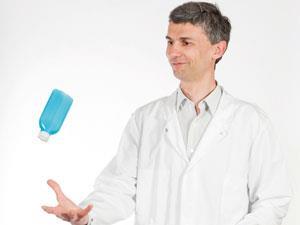 Josso trained as a chemist in France before doing a PhD in organic chemistry in the US. ‘I went back to Paris after finishing a post-doc in Geneva,’ he recalls. ‘A friend of mine told me she was working at L’Oréal and how much she enjoyed it. I decided to send in my résumé and a couple of weeks after that, I was at the bench.’

There have been many highlights in Josso’s career at L’Oréal. ‘For me, a great success is a great product that brings something new to the consumer. Being a scientist, it is most rewarding if it’s also a technological achievement,’ he says. He is particularly proud of their work on sunscreens that are stable to UVA light, which accounts for 95% of the UV light that reaches our skin. In the 1990s, L’Oréal discovered that compounds designed to absorb UVA radiation were in fact degraded by sunlight. ‘L’Oréal pretty much invented high photostable UVA protection,’ he says of their discovery. ‘Many in the business were sceptical at first, especially in the UK. Now it is mandatory.’

Josso has also helped to formulate sunscreens for sensitive skin that don’t leave the skin pale and sticky. His team was inspired when a colleague returned from a trip to Japan with a sunscreen product that was ‘different from anything we knew’. This sunscreen was a very fluid and unstable suspension, but a little steel ball inside the bottle re-homogenised the formula with a simple shake. The ‘shaka-shaka’ technology opened up new formulation possibilities. ‘We were able to use new cosmetic emollients, new types of fillers from make-up, and combine them with a state-of-the-art filtering system,’ says Josso.

L’Oréal was founded as a hair dye company in 1909 by the French chemist Eugène Schueller. It now has divisions for haircare, hair colour, skincare, make-up, and fragrances, with 68,900 employees worldwide, 3,676 of whom work in R&D. In 2011, L’Oréal spent €721 million (£565 million) on R&D and its advanced research division is spread across six sites in France, Japan, China and India.

In April 2012, L’Oréal inaugurated its new global hair research centre in Paris. New ingredients are screened at other research and innovation sites before being transferred to the Paris site. ‘There are large teams of expert formulators to develop new formulations that incorporate the new ingredients,’ says Julie McManus, scientific director for L’Oréal UK. The resultant formulations are then finalised and tested at the research centre.

‘The success of our formulations and products can be attributed to our diverse and multi-disciplinary research and innovation teams,’ says McManus. For example, the new hair centre needs ‘biologists, biochemists and physicists to understand the fundamental biology of hair and its physical properties,’ she explains. ‘Chemists and mathematicians model, screen and select new ingredients. And biophysicists develop methods to evaluate the efficacy of the hair care products.’ Chemists and chemical engineers then work on formulation and manufacturing.

Much of the L’Oréal research is similar to that carried out by the pharmaceutical industry. For example, ingredient investigator Rui Pereira heads a team using high-throughput screening to find new ingredients. His team used computer simulations to find a compound that would affect the activity of fibroblasts in the skin, which are responsible for pigmentation and are the primary targets of UV damage. They identified a sugar called rhamnose, extracted from the Brazilian cat’s claw plant and, after a long series of clinical trials, rhamnose now features in one of the company’s skin creams.

Josso’s team will stay with a product right through to the first multi-tonne industrial batch, and is also responsible for the efficacy, safety and stability dossier. So he must work closely with scientists from other teams and, given the nature of their products, with the marketing team too. ‘There is a seamless continuity between advanced research, applied research, development and marketing,’ he says. ‘We get new molecules and new formula architectures from the research teams, and the marketing teams help us decode the market and catch new trends.’

‘Some products are a response to needs expressed by consumers. Others are completely new and create new categories the consumers did not know could exist,’ says Josso. Always planning ahead, he is already ‘thinking about the innovations we can put on the market in 2014’.