Long before energy storage materials were in vogue, Peter Bruce saw their potential, as Emma Davies finds out

Life would be very different without the rechargeable lithium ion batteries that power our gadgets. But when Peter Bruce, professor of chemistry at the University of St Andrews, UK, first entered the field in the 1980s, ‘no-one was really interested in energy’. Fortunately, Bruce had courage in his scientific conviction that energy-related materials would become indispensable. Since then, his team has carried out groundbreaking research into nano-structured intercalation electrodes and polymer electrolytes that underpin rechargeable lithium ion batteries. In 2012, he was awarded the AkzoNobel science award for his contribution to solid state chemistry and electrochemistry, and particularly in energy storage. 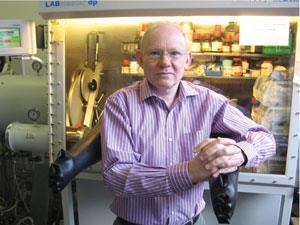 While at Oxford, Bruce worked with Goodenough to produce manganese oxide spinels used today in batteries for the Nissan Leaf and Chevrolet Volt cars. He also forged a strong friendship with a Japanese researcher who invited him to Japan for an academic visit. There, Bruce visited the research units of high-tech companies Sony and Panasonic. ‘I was amazed by their interest in lithium ion batteries,’ he recalls. ‘In the western world no one was really interested.’

What Bruce saw inspired him to continue working on energy storage materials, at a time when funding in the field was particularly hard to come by. ‘The Japanese had a 10–20 year time horizon for trying to develop rechargeable lithium ion batteries even though they didn’t know how they were going to do it,’ he says.

Bruce moved to Heriot–Watt University in Edinburgh, UK, where he ‘recognised the concept of a solid polymer electrolyte’. At the time, conventional thought was that only amorphous polymers (effectively in the liquid state) could be electrolytes. Crystalline polymers, with their regular order and rigid frameworks, were considered insulators.

‘I took the view that there wasn’t really a sound basis for believing that,’ recalls Bruce, but there was no way of studying the polymer structures to prove it. He and his team spent two years developing a powder diffraction technique to peer inside polymer systems. When they examined their samples, they spied a system of tunnels that appeared able to transport ions. ‘That was a pretty exciting moment,’ says Bruce. 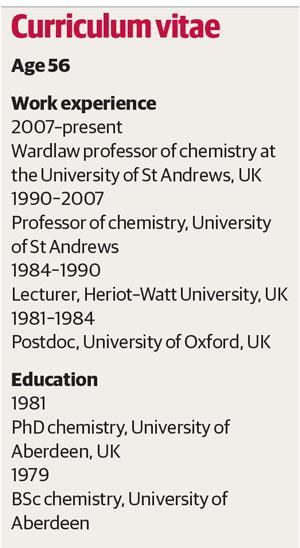 They went on to show that the polymers could indeed conduct. ‘That opened up a new class of ionically conducting solids based on crystalline polymers,’ he says. While the ions in amorphous polymers move as if in a liquid, the mechanism of conduction is completely different in crystalline polymers. This science is ‘fundamental’ and in some ways very far from batteries, says Bruce. ‘But it’s all about developing the underlying science in an area that’s relevant to batteries because there’s still a hope that one day we can have an all solid-state lithium battery with a polymer electrolyte. We [as a community] are not there yet but it’s only by gaining knowledge in these areas that we have enough understanding to make that happen.’

Bruce is particularly proud of the fact that the powder diffraction technique was taken up by researchers in many different fields, becoming, for example, a big hit for pharmaceuticals.

For a few years now, Bruce’s team has also been working on materials for lithium–air batteries. ‘I don’t know if we were just lucky or if the timing was right, but interest in lithium–air has really taken off ,’ says Bruce.

These batteries operate in a very different way to conventional lithium ion batteries. When lithium–air batteries are discharged, oxygen from the air combines with lithium ions and electrons to form lithium peroxide. ‘Remarkably, this reaction is reversible and is the basis of how the battery works; effectively it breathes,’ explains Bruce.

Commercial and academic teams around the world are now battling to produce the batteries. ‘It’s a very competitive area,’ says Bruce. ‘But at the same time, it’s a field that requires fundamental scientific work to understand the processes that occur in the cells and then use this knowledge to address the challenges. It’s sometimes not easy to take the longer route but I think it’s often the correct thing to do.’