Craig Banks is passionate about his research. In his short academic career he has already co-founded a spin-out firm to make cannabis detectors, as Yfke Hager finds out

Craig Banks is passionate about his research. In his short academic career he has already co-founded a spin-out firm to make cannabis detectors, as Yfke Hager finds out 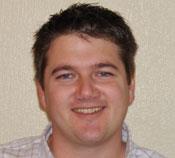 Speaking to Craig Banks, it quickly becomes clear why this young chemist has achieved so much in such a short period of time. As newly minted chemistry researchers are increasingly being snapped up by industry, some would argue that it takes sheer dedication and a love of research to carve out a career in academia these days. Banks possesses the determination that characterises successful academics.

With only months to go before policemen start roaming the streets wielding a handheld cannabis sensor that he helped develop, it comes as no surprise that Banks was initially attracted to chemistry ’because of its application to real life.’ As an undergraduate at Coventry University, UK, Banks was inspired to pursue a career in research after watching his professors in action in the lab. He enjoyed his final year project so much that he decided to do a PhD in electrochemistry. Around this time Richard Compton, professor of chemistry at the University of Oxford, UK, and an expert in electrochemistry and electroanalysis, was interested in using ultrasound to sense molecules. Compton was starting to look into the fundamental aspects of sono-electrochemistry and took Banks on as a PhD student. It was the start of a fruitful collaboration.

In the past five years working in Compton’s group, Banks has published prolifically, developed enough original applied research to produce six patents, and co-founded a spin-out company with Compton. Banks appears to have taken academia’s ’publish or perish’ adage to heart; he already has 110 research papers to his name. Banks has also found time to write a book on voltammetry with Compton, which offers insights into the design and analysis of experiments in this field.

Banks has wide-ranging research interests, spanning the fundamental study of carbon nanotubes (particularly their electrochemical properties), sono-electrochemistry and nanotechnology. But the key to his success, perhaps, is his focus on practical applications in these fields. During his postdoctoral years he developed a particular interest in novel drug detection strategies. ’I moved into nanotechnology during my PhD, and then I gradually moved on to drug detection using electrochemical sensing,’ Banks says. By branching out into nanotechnology, he was able to make significant advances in the functionalisation and miniaturisation of drug sensors.

Banks’ research efforts on cannabis detection were rewarded recently when he and Compton co-founded the spin-out company OxTox. The company will produce hand-held cannabis sensors to be used by police officers at the roadside to detect people driving under the influence of drugs, much like the breathalyser test for alcohol. Banks and Compton designed and built an electrochemical sensor that tests saliva samples and only produces a signal when the specific target drug is present. ’It’s very sensitive, portable and cheap,’ Banks says. The University of Oxford has its own technology transfer company, Isis Innovation, which has worked with Compton to protect the intellectual property created in his research group. ’We decided to patent protect [the sensor] and Isis saw a gap in the market. They got the ball rolling and we met up with investors, who invested half a million pounds,’ Banks says. ’It was very exciting, and a completely different experience from lab work.’ He anticipates that the sensors will be out on the streets within the next six to 12 months.

After two productive years of postdoctoral research in Compton’s group, Banks was ready to embrace the life of an independent researcher. ’I thought, now’s the time to make the transition,’ he recalls. But before embarking on an academic career, Banks decided to gain some industrial experience at Schlumberger Cambridge Research, where he developed sensors for toxic gases based on electrochemistry. ’This gave me a greater understanding of research and development conducted in an industrial environment, compared with my experience of academic-only research,’ he says.

Around this time, Banks spotted a lectureship at Nottingham Trent University. He applied and, to his considerable delight, was offered the position. He’s now settling into his new job and relishes the responsibilities that it entails. ’Now my days are filled with teaching students and supervising labs, but then I also have to find the time to do research, which is the bit I really love,’ he says.