How to talk to the media about science 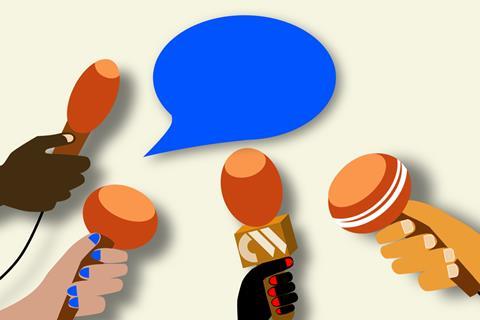 Despite the widespread availability of social media platforms, the news media still remains one of the primary channels through which the scientific community connects with non-scientists. Yet, many scientists are wary of speaking to journalists.

Sandip Patel, an oncologist and associate professor at UC San Diego Health in the US, believes researchers have a responsibility to interact with reporters. ‘The goal of any and everything we do in terms of research is to better humanity,’ he says. ‘If we’re not able to communicate that, people will not be interested in supporting research and the majority of research is funded through public [taxes].’

Patel has spoken to outlets such as The Scientist, Healthline, STATNews and his local TV news stations, and says it’s important to do some research before greenlighting an interview. While most journalists report responsibly, some outlets may sensationalise findings. ‘Just make sure you know who you’re talking to,’ he says.

A little preparation can go a long way in helping you tackle interview queries. Kim Krieger, a former freelance journalist who is now a research writer at the University of Connecticut, US, suggests picking two to three ‘well thought out, practised talking points’ on the interview topic beforehand. If you don’t get asked any relevant questions, ‘you can do what politicians do: answer the question you wish they had asked you instead of the one they actually did’, says Krieger.

Sahana Ghosh, contributing editor at the environment news service Mongabay India, suggests double checking time zone differences before deciding on a time slot for the interview. If you have children at home, give the journalist a heads-up, especially if it’s a video or audio story. ‘This way journalists will know if they can opt for a better kid-friendly timing in case they need clean audio/video clips,’ says Ghosh. ‘Additionally, this will help journalists to be sensitive to working with scientists who have to attend to children at home.’

‘I am very passionate about science, but I’m not a scientist and I don’t have a science background,’ says independent science journalist Kate Morgan. She finds it can sometimes be challenging for scientists to explain their work in simple terms. Heather Buschman, assistant director of communications and media relations at UC San Diego Health, says this is a common problem because it’s easy for jargon and heavy-duty terms to become deeply ingrained in a scientist’s brain.

‘I advise people to practise with a family member or neighbour or somebody who’s not a scientist so they can tell you what words they don’t understand,’ says Buschman. Additionally, make an effort to avoid using words and phrases that aren’t used in casual conversations. For example, instead of saying ‘increased efficiency’ just say ‘it works better’.

Lesley Evans Ogden, a freelance science journalist based in Vancouver, Canada, looks for more to a story than just facts and data. ‘Find some way of working in an element of your personality,’ she suggests.

Buschman suggests sharing things that surprise and excite you – or even personal stories and anecdotes about your life in the lab. If you’re a skydiver and just came in from a jump before your interview, it doesn’t hurt to mention it. The finding of the study is obviously important – let’s say a drug’s efficacy against pancreatic cancer – but journalists are keen to look beyond the scientific details, especially if it’s a larger feature. Why did you start studying pancreatic cancer? Did you know someone with that disease? These are often the details that initially appeal to readers, helping to get them hooked to the science.

Most mainstream media entities do not allow sources to read the article they’re quoted in before it is published. There are many reasons for that, including the ethical need to maintain journalistic independence and sources’ tendency to censor their comments. ‘If I were to send my draft to [someone quoted in it], even if they sound like the smartest person on the planet, they’re going to want to make changes,’ explains Morgan.

‘We’re all on the same team’

Patel urges scientists to brush aside concerns of getting misquoted or of their work not being represented accurately. ‘I think it’s important that regardless of these rare kind of fears – most of them are, frankly, unfounded – it’s important that we continue to communicate,’ he says.

Journalists don’t want to get their facts wrong because it damages their reputation: ‘We’re all on the same team,’ says Morgan. If a journalist is unsure of facts, they are likely to get back in touch for a clarification. Scientists can also proactively help with accuracy by developing a fact sheet containing important statistics and facts about their work, and sending it to the journalist after the interview.

And if you feel there are errors in the published copy, don’t hesitate to send the journalist a polite email asking for a correction.

Buschman advises scientists to be helpful before and after the interview. Respond promptly to requests – and if you aren’t the right fit for the interview, suggest another colleague. ‘This is a great chance to help give an opportunity to maybe a junior colleague, women and underrepresented minorities in the sciences, who might not be interviewed as often,’ she says.

Once the story is out, take a moment to promote it on social media. ‘That can go a long way in helping to build a relationship, and the reporter may come back to that person again for another story, and everybody benefits,’ says Buschman.

She adds that scientists should interact with their institution’s communications office if they’re interested in more media appearances. ‘If there’s national buzz about something new you could comment on, let them know,’ says Buschman. Communication officers try to make their pitches to reporters as newsy as possible in order to get a positive response. ‘Moreover, reporters are also more likely to reach out to experts who are active on Twitter or write commentary pieces for publications such as The Conversation.