Managing change: Chemistry down under

Australia has a flourishing academic sector, and the weather's better than in the UK. What's not to love? asks recent émigré

Australia has a flourishing academic sector, and the weather’s better than in the UK. What’s not to love? asks recent ?migr?

For Brits looking to move abroad, Australia has long held a special appeal. I can personally attest to the country’s charms, having moved here from the UK twice, initially as a chemistry postgraduate on a student visa, and later as a permanent resident working as a science writer. But what’s it like to emigrate to Australia as a working chemist?

John Stride, a British-born materials chemist working at the University of New South Wales in Sydney, is in a good position to judge. Stride worked in France and Germany for ten years before moving down under in 2005 after securing a job here. ’It’s a relatively easy transition for somebody from the UK to make,’ he says. ’The way things work, the sense of humour, the language - Australia is, in some ways, the UK in the sun.’

As an academic from the UK, that familiarity extends to your professional life as well, says Adrian George, who before taking up his current position at the University of Sydney was a lecturer at the University of Reading, UK. ’The systems are remarkably similar. The combination of teaching, research and administration, the way that we asses students - it was an easy transition.’

However, that’s not to say that everything is the same. ’I’ve found that there’s a big difference in work culture,’ says Stride. ’There’s more of a can-do attitude, which is really quite refreshing.’ Matthew Todd, an organic chemist at the University of Sydney, agrees. ’It’s sunny here, and it really does influence people I think - it means there are a lot of people here with a sunny disposition. And I think that optimism can be quite contagious.’

That cheery outlook apparently comes despite, rather than because of, the research grant funding system, which is just as competitive as it is in the UK.

’It’s tough - but it’s do-able,’ says Stride. ’In Australia there is one call for grant proposals per year for the main funding body, the ARC [Australian Research Council], rather than the rolling schemes used in the UK. As far as I can see there’s no perfect system, and you just have to play the cards you are dealt.’ 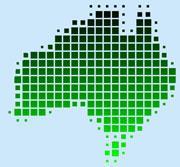 Perhaps a more significant point of difference between Australia and other parts of the world is the lack of major chemical industry in the country. This means it’s very difficult to secure research funding from industrial backers, says Stride. For chemists considering a move to Australia, though, a more direct consequence of the industry’s relative absence from the country is the lack of jobs outside of academia.

It’s a situation where Stephen Davies, a chemist at the Australian government’s National Measurement Institute, has first-hand experience. Davies originally arrived in Australia as a backpacker in 1989, having finished a PhD in organic chemistry - and quickly landed a post-doctoral research position at the University of Sydney. The University happened to have funding available at the time, and Davies’s eventual boss at Sydney had just come back from a conference in the UK where he had happened to meet Davies’s PhD supervisor. ’It was an incredible sequence of luck,’ he says.

After four years in Sydney, Davies went back to England, before returning to Australia in 1996 as a permanent resident. ’My lucky streak had run out big-time - I spent two years labouring on a building site, looking for a science job,’ he says. Eventually, contacts Davies had made while a post-doc in Sydney paid off, and he found a three month lab position. He is still there today, leading a team that makes high purity reference materials for applications such as sports-related drug testing.

’It was only because of the people I knew that I got that foot in the door,’ he says. ’I’d say that the number of positions available for a person with my skills is quite limited. In my group there’s not much turnover of staff.’

Coming to Australia as a post-doc does offer one relatively straightforward way to work in the country - and potentially to make those key contacts that are useful later on. It’s an opportunity that quite a few early-career chemists take up, says Todd.

’I certainly get the impression that Australia is seen as a pretty attractive place to go and work for a bit,’ he says, ’we certainly don’t suffer a lack of applicants [for post-doctoral positions] from overseas.’

Australia’s exotic location might be a winner when it comes to the weather, but from a professional point of view its distance from the rest of the world does have an impact, says George. ’The remoteness is noticeable rather than a big issue. In the UK it is very easy to collaborate with people at other universities. In Australia, because of the distances, it’s not so easy.’

Overall, the positives of living and working as a chemist in Australia outweigh the negatives, says Stride. ’The costs that you pay, such as the remoteness, you take them on the chin because all these other benefits are there, in your personal as well as your professional life.’