On your marks, get set, go 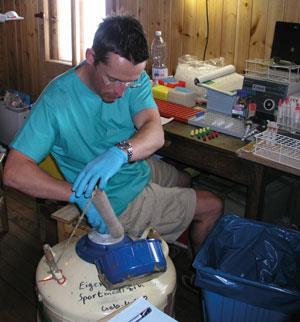 As a former international footballer and distance runner, Damian Bailey has a very personal motivation for choosing his area of research: ‘My brain was convinced that it could break a running world record, but my body simply wouldn’t take me there,’ he explains. ‘I needed to understand why not, and physiology and biochemistry held the key.’

After a BSc in health and exercise sciences at Manchester Metropolitan University, UK, followed by a PGCE at the sporty Loughborough University, Bailey took a year out to train in Switzerland where he enjoyed the performance benefits of living in the low oxygen environment of high altitude. He then came back to the UK to study for his PhD at the British Olympics Medical Centre, where he looked at the factors that control, and ultimately limit, oxygen transport through the body, focusing on the brain. ‘Since the brain has evolved to be so oxygen-hungry, the concept that exercise starts and ends in the brain makes intuitive sense,’ he explains.

After his PhD, Bailey became a senior lecturer at the University of Glamorgan, where he remains 15 years later. His research now looks at how free radicals influence the delivery of oxygen to the brain in the presence of too little or excess oxygen. ‘We’re interested in how the body copes with extremes. Any disease is an extreme, and world record-breaking performances are another extreme,’ he says.

Diseases such as vascular disease, caused by a furring up of the arteries, are characterised by hypoxia: a lack of oxygen in the circulation. Bailey hopes that developing a better understanding of the body’s behaviour in low oxygen situations – using high altitude as a model – will lead to improved treatments. At the other end of the spectrum, he is assessing Olympic standard athletes. ‘These guys are like Ferraris in terms of getting oxygen to the brain,’ Bailey explains.

To measure the free radical concentrations in volunteers’ blood, his team uses ESR – electron spin resonance. ‘ESR is the most direct, specific and sensitive technique for the detection and characterisation of free radicals,’ he says. ‘We measure blood samples across the brain by placing catheters in the artery (blood going in) and jugular vein (blood coming out),’ he explains. As the free radicals have short half lives, compounds called ‘spin traps’ are added to stabilise them, allowing them to be detected. ‘By simultaneously measuring brain blood flow, we can then calculate the “rate” of free radical release from the brain itself.’ 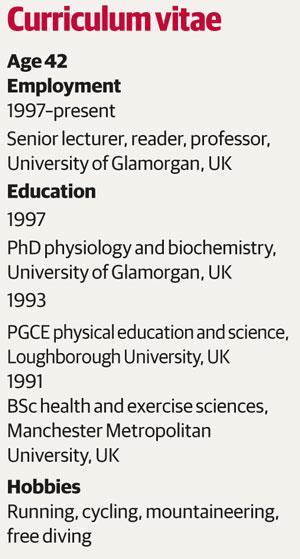 One of the jewels of the Bailey research lab is a hypoxic chamber, which can simulate a high-altitude environment. As well as aiding disease research, the chamber is also used to train athletes. ‘What happens with hypoxia is that you generate more free radicals and they switch on genes that can get more oxygen to the tissue. As you adapt to that, you are able to cope with less oxygen. When you return to a normal oxygen environment – such as at the Olympics – you’re almost super charged,’ he explains.

Bailey is currently working with reigning world triathlon champion Helen Jenkins, who will be competing in the London 2012 Olympic games. ‘We’ve built a hypoxic chamber in her garage and she is using that to train intermittently at 4500m,’ he says. ‘It’s turbo charging her.’

He also assesses the impact of high altitude for real: ‘This July I’ve organised an expedition to climb the highest mountain in Bolivia: Nevado Sajama at 6500m.’ During the trip, he will be taking measurements from his co-climbers. ‘We are going to play the world’s highest rugby match between males and females on the summit of Sajama,’ he explains. Bailey wants to explore the different ways that male and female brains react to low oxygen levels, as preliminary research has suggested that the female brain is more adept at coping with low oxygen.

It can seem like a very mixed bag, Bailey explains, referring to the range of work he carries out. ‘But it’s unified by our interest in oxygen, our interest in free radicals and applying that across extremes from top end Olympic athletes to diseased patients – from the sublime to the cor-blimey!’