The UK pharmaceutical industry is having huge problems recruiting the skilled bioscientists it needs. School-leavers and chemistry graduates now have far less practical lab experience than in the past, and companies are increasingly having to employ PhDs to do the jobs they would once have expected a graduate to be capable of. 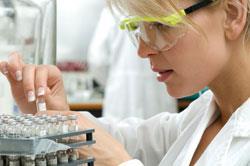 According to research by Semta, the Sector skills council for science, engineering and manufacturing, 39 per cent of pharmaceutical and other bioscience companies have vacancies that are difficult to fill - and a quarter of them are already looking overseas for good candidates. Last month, it launched an action plan to address these issues.

’We expect graduates to be working in the lab generating and interpreting data,’ says Aileen Allsop, vice president of science policy in R&D at AstraZeneca. ’But we often find that their degree has not trained them to do that. In the past, they would probably have done a lab-based research project in their final year, but nowadays many of these are literature searches on the internet.’ And with the current vogue for ’sexy’ degree courses like forensic science, it can be almost impossible for a company to work out what a graduate has actually studied, she says.

James Graham, associate director for science policy at Pfizer, reports similar difficulties. ’Graduates nowadays often lack the skills to do practical procedures, the ability to develop scientific methodologies and design studies, and even the ability to interpret data,’ he says.

Semta’s new skills plan is designed to tackle these problems. It has produced an industry-standard set of competencies, in conjunction with AstraZeneca, Avecia, Eden Biodesign, Novartis, Pfizer and 3M Healthcare. These form the basis for job design, recruitment, training and performance assessment, as well as providing a framework for organisations to train their existing workforce to meet skills shortages. A network will be set up for employers to swap ideas about training provision and good practices. Universities will be encouraged to offer short courses that meet companies’ professional development needs, and to make the content of their degree courses more appropriate for bioscience employers, with a greater emphasis on lab work.

The industry is optimistic that the plan will make a difference. ’The whole process of developing standards is a great start,’ says Pfizer’s Graham. ’Because Semta is working with big pharma companies like ours and also smaller ones, it will get a very good idea of what the needs are across the industry. That will help universities and training organisations to develop skills, all the way through from lab technicians to graduates.’

Allsop agrees. ’There’s a mismatch at the moment between the graduates that universities are producing and our needs,’ she says. ’We hope that with an organisation like Semta set up between the government, the universities and ourselves, we can understand each others’ problems and address them.’

The RSC’s advice and guidance services manager, Caroline Tolond, also welcomes the initiative. ’The RSC is already trying to address some of the skills gaps in the sector by offering generic skills training courses such as project management and leadership,’ she says. ’We are also raising the aspirations of young people, and encouraging graduates into the scientific sector through events like ChemCareers, ChemNet and the Chemistry for our Future programme.’

And scientific skills shortage isn’t a problem that’s facing the UK in isolation. ’It’s the same in our Swedish labs,’ AZ’s Allsop says. ’We also see the same trends in the US, but because the population of scientists is much greater it’s not so difficult to find the right people.’

It’s a real contrast to Asia. AZ has a research site in India, and Allsop sees five or six enquiries a day from Indian students either wanting to apply for a job or asking what they should study to make themselves more employable. In contrast, there are just one or two such requests a year from UK students. As Pfizer’s Graham says, ’There’s a large number of well-trained graduates coming out of both China and India. It makes the future of the UK plc look more challenging.’