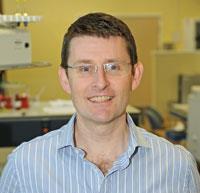 Joe Sweeney, professor of organic chemistry at the University of Reading has always had good connections with industry, with much of his research being supported industrially through Collaborative Awards in Science and Engineering (Case)-type funding. But recently, he’s been working more formally with AstraZeneca (AZ), through a Royal Society (RS) industry fellowship.

’I was speaking to another academic at a conference, and he said that despite all his consultancy experiences, he didn’t really know what happens in industry on a day-to-day basis,’ says Sweeney. ’I thought that was really interesting - this was a world-leading organic chemist, very much in demand by industry, and yet he made that comment. So I spoke to my contacts at AZ, notably David Lathbury, who’s director of process chemistry at Charnwood, and we realised it would be mutually beneficial for academics to discover more about the challenges currently facing industry. The industrial host would also be able to find out about the pressures on academia, which have greatly intensified during the past decade.’

The RS’s industry fellowship programme provided the opportunity to do this, and Sweeney applied for, and was awarded, a 2-year fellowship, starting in December 2007. ’I was a full-time seconded pseudo-employee of AZ at Charnwood, and also at Avlon Works, near Bristol,’ he explains. ’I was a roving chemical consultant getting involved in their projects and training programmes, and also working on a number of my own research ideas that were greatly helped by having access to industrial technology such as catalysts, screening robotics and purification methods that weren’t available at the university.’

The fellowships provide a salary-only buyout - either for 2 years full time or 4 years part time - to provide a temporary replacement lecturer while the recipient concentrates on the industrial placement. ’The interaction with AZ was vibrant and positive on both sides, but in 2 years I really only scraped the tip of the iceberg. So I applied to the RS for an extension,’ he says. ’While there wasn’t a formal extension scheme, we proposed that AZ would part-fund three PhD students in my group, and that branding the future collaboration as a RS fellowship on a no-cost basis would be a great advertisement for the scheme. I was delighted to hear recently that the RS had authorised an extension, only the second extension to be granted.’

In his extension proposal, he suggested that they should be generally available if it were a no-cost option. ’The idea now is that I will spend, on average, one day a week at an AZ site, but still do my full-time job at the university,’ he says. ’It’s extra work for me, but in the current challenging funding environment it makes sense for any academic to nurture connections with industry. But, perhaps more importantly, we also generated so much momentum with the interaction that we thought it would be foolish to lose it.’ 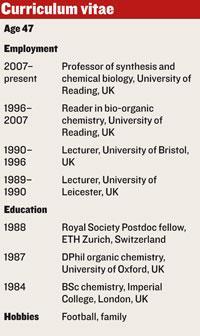 As well as his direct interaction with AZ, Sweeney is now setting up an industry-academia network. ’We’ve identified eight other well-respected organic chemistry professors in the 35-45 age bracket, and there is also a plan to broaden the scheme across other industry partners, not just in pharma, but in other areas such as agrochemicals, plastics, and perhaps even the oil industry,’ he says. ’The generic nature of the interactions mean it should be possible to put something similar in place across pretty much every scientific discipline. I think it could provide a new model for knowledge and innovation exchange that would have a massive impact. I think it will provide a mechanism for all organic chemists - and probably all scientists - to extend existing collaborative interactions, and find out about each other in a much more productive way.’

He’s approaching other companies as prospective partners, and is optimistic that there will be good uptake. ’Once we’ve got enough people on board, and because this would be pre-competitive, there’s no reason why we can’t create a collaborative network that everyone buys into routinely as part of being a chemistry academic,’ he says. ’We hope that in the future we will be able to establish a new model for knowledge transfer between academia and all sectors of industry. A successful exemplar group from organic chemistry will show the potential impact, and it could then be adopted in most scientific disciplines.’