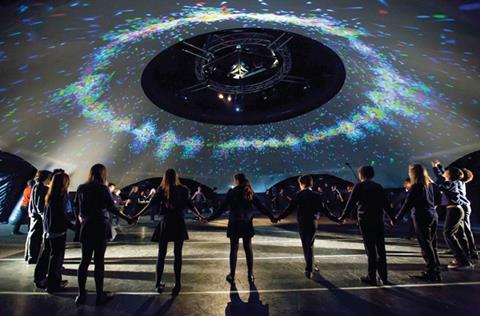 Think ‘spectroscopy’ and you might picture a windowless room crammed with high-tech kit. But a ballroom filled with whirling dancers? Probably not. Yet a concept called Danceroom Spectroscopy (dS) is proving a hit with its joyful mix of art and science, allowing people to visualise and manipulate the otherwise invisible atomic world to create sounds and vivid swirls of colour as they move around in an atomic bath.

‘It’s an interactive molecular dynamics simulation,’ explains the project’s leader David Glowacki, a Royal Society research fellow at the University of Bristol and a visiting professor at Stanford University, US. A computer calculates force field interactions between simulated atoms, and 3D cameras capture the dancers, which are then interpreted as energy fields that ‘warp the atomic dynamics of a simulated nano-world’.

The art world may have embraced dS, but it started as a science outreach activity, based directly on Glowacki’s chemical physics research. ‘To do calculations like these in real time is a massive computational challenge and we had to build our own computers and code to run it,’ he says. As it happens, developing the real-time systems has also advanced Glowacki’s academic research and he has published papers on the algorithms that drive dS. ‘Scientists may not care about dance, but they do care about algorithms,’ he laughs.

Glowacki describes himself as a ‘scientist, artist and cultural theorist’. Full of energy and ideas, he has always followed his instincts, and managed to secure funding along the way.

Growing up in Milwaukee, US, Glowacki had wanted to study philosophy, but in the end followed his father’s advice and opted for science. He headed to the University of Pennsylvania, where he studied chemistry, along with subjects including maths, literature and philosophy.

After his first degree, Glowacki decided to take a year off from science and travelled to the University of Manchester, UK, to study for a master’s in cultural theory at the school of religions and theology.

At that stage, Glowacki’s brain was ‘very compartmentalised’ he recalls. ‘I’ve written a few papers in arts and humanities journals. It was a crazy time. I would be writing a chemical physics paper one week and spend the next on cultural theory … I assumed that I would just have to be a dual personality person,’ he jokes. 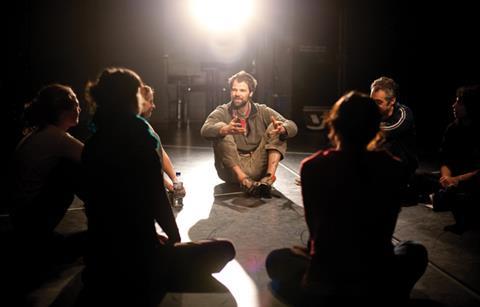 Glowacki then moved to the University of Bristol for a postdoc with Jeremy Harvey and Fred Manby. During this time, dS emerged and had its debut at the Bristol science festival. It proved so popular that it was soon an installation at Bristol’s Arnolfini Arts Centre, in collaboration with professional dancers. It has since graced various festivals, as well as London’s Barbican Arts Centre and one of world’s leading digital art galleries, the ZKM Center for Art and Media Technology in Germany. Last September saw dS at Stanford University’s Art Gallery and in March 2015 it will be in San Francisco. The project is fulfilling work for Glowacki, since it ‘uses both sides of the brain’.

Glowacki and his colleagues are now adapting the dS algorithms to build a ‘nano glove box’. ‘The idea is that researchers, running a simulation on their computer, could stick their hands into the simulation. Their hands, treated as fields, could be used to manipulate the simulation,’ he explains. The team has already published a paper showing how dS can be used to chaperone a simple protein simulation – forcing it into a loop and back again.

If the name Glowacki is oddly familiar, it may be because it hit the headlines last summer after an incident at the Bristol Proms. During the proms, audiences had been encouraged to engage with the music, and in that spirit, Glowacki used dS to collaborate onstage with violinist Nicola Benedetti. The following night, during the Hallelujah chorus of Handel’s Messiah, Glowacki raised his hands and cheered, at which

point he was knocked down from behind by another member of the audience. The incident ‘went viral’, and as it did the story took on a life of its own, with one of Glowacki’s favourite interpretations being ‘Crowd surfer ejected from classical performance’, which appeared on the heavy metal website Metal Injection. ‘I normally only have 30 or so hits a day on my website. I woke up one morning to find that I had nearly 100,000 hits. People were calling me for interviews, thousands of emails – it was crazy. It just got weirder and weirder. Be careful believing anything you see on the internet,’ says Glowacki.

If you like the sound of Glowacki’s wacky world, he has funding available for PhD students to study the dynamics of enzyme catalysis, with the opportunity to spend time with collaborators in the US. One thing is certain – there would never be a dull moment.