The man who gets stung by insects

A large chest freezer sits behind Justin Schmidt’s desk. At first glance, it looks like any other. But closer inspection reveals two alarms. ‘If something goes off, man I am down here,’ laughs Schmidt. The freezer contains a vast array of insects collected over decades. ‘I have everything from tarantula hawks to honey bees.’ 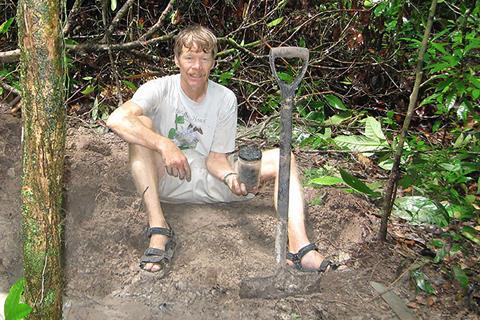 Schmidt, an entomologist, is well known for his ‘pain scale of stinging insects’. This ranks stings from a tolerable score of one to an unbearable four, based on personal, painful experience. He grew up in rural Pennsylvania, US, where his father was a forester. A born naturalist, he was fascinated by insects. At school, Schmidt soon fell for chemistry, which brought ‘unlimited experimental opportunities’, he recalls in his book, The sting of the wild (click here our review). These, including a smoke bomb, were ‘not all appreciated by everyone’.

Schmidt chose to study chemistry at Pennsylvania State University, followed by a masters at the University of British Colombia, Canada. However, finding himself increasingly drawn to biology, he moved back to the US for a PhD at the University of Georgia. Murray Blum, his supervisor at Georgia’s entomology department, had told him of a ‘desperate need for chemists in entomology and biological science’. ‘I don’t think the situation is any different today,’ says Schmidt.

Blum suggested a dissertation on Pogonomyrmex harvester ants, with their unexplored venom chemistry. It was the start of an endearing love affair with the ants.

Schmidt and his wife Debbie, a zoology student, set out on an ant-collecting mission. Perhaps inevitably, they were both stung. The searing pain differed from the hot burning he had experienced in his childhood insect encounters. In fact, the ‘piercing and excruciating’ pain that followed only faded after eight hours of suffering. Yet Schmidt was fascinated by the chemistry and biology that had caused the hairs around the sting site to stand on end and his skin to become moist. It was ‘love at first sting’.

He and his wife set out in their old Volkswagen camper van to collect as many insect species as possible so they could analyse their venom. The pair had no desire to be stung intentionally, recalls Schmidt, but ‘if we did get stung, we [decided we] might as well be prepared to record the data.’

After a postdoc at the University of New Brunswick, Canada, Schmidt began work at the US Department of Agriculture’s Carl Hayden Bee Research Center in Tucson, Arizona. His first project was to study the physiology and nutrition of the diet of honey bees. He managed to talk his way onto a project to study the pheromonal attraction of Africanised bees – otherwise known as killer bees. In his spare time he was working on what really interested him: bee venom.

Schmidt made synthetic pheromones for chemical lures. He discovered that three chemicals were enough to attract the bees and incorporated them into lures hidden in artificial hollow trees. After a later project on nutrition, looking at how bees recognise pollen, Schmidt left to do his own work on stinging insects, in collaboration with the University of Arizona’s Center for Insect Science and a host of experts from around the world.

Based: University of Arizona, Tuscon, US

CV: BS in chemistry, Pennsylvania State and PhD in entomology, University of Georgia. Author, The sting of the wild, and IgNobel Prize winner, 2015

Schmidt’s heart still lies with harvester ants, which he has shown to produce the most toxic insect venom known to date. The venom contains a ‘cornucopia of enzymes’, he explains, including two phospholipases that break phospholipids in cell membranes. He also has a fondness for bullet ants, going as far as injecting a synthetic version of the species’ poneratoxin – a neurotoxic peptide that causes paralysis – into the skin on his forearm.

He has an interest in medicinal chemistry, isolating components of certain venoms that have very specific targets. For instance, tarantula hawk venom does no tissue damage but hits a pain receptor. ‘So if you can activate the receptor, you can test if you can ameliorate that to block the pain response,’ he says. The hope is to develop chemicals to block specific types of pain, rather than relying on general pain killers.

Schmidt has always done a great deal of outreach work, often accompanied by his youngest, 14-year-old son. ‘He has been my right hand helper at outreach programmes since he was six or seven,’ he says. Yet for anyone looking to follow in his footsteps, he confesses it’s difficult for someone with such a unique life to offer career advice. ‘Follow your dreams,’ and ‘be adaptable’, Schmidt counsels. He certainly seems to have followed his own advice.