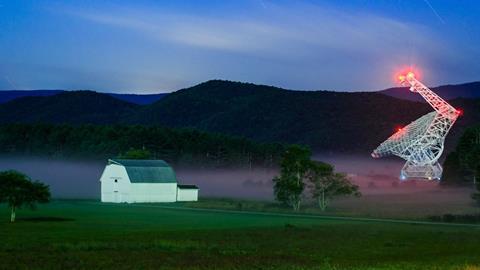 Stars in their eyes

In 1609, Galileo used his improved version of an early telescope design to show the planets in our solar system revolve around the Sun. Today, some of the most powerful Earth-based telescopes no longer rely on optics. Instead, they detect radiowaves emitted by the clouds of gas and dust from which stars are born. For example, the Atacama Large Millimeter/submillimeter Array (ALMA) – a cluster of 66 movable 12m and 7m radiotelescopes in Chile – has detected oxygen in a galaxy over 13 billion light years away. And although today’s astrochemists have tools with magnification powers beyond Galileo’s wildest dreams, they are still answering equally fundamental questions: How did the universe form? How do planets form? Why does Earth have water? How did life form here? And are we alone in the galaxy?

These questions require science in remote locations. Radiotelescopes are susceptible to interference which, depending on their operating range, can come from mobile phones, Wi-Fi, Bluetooth, household microwaves and even water vapour in the lower atmosphere. Deserted deserts and high altitudes are therefore popular spots; ALMA, for example, is 5000m above sea level in the Andes mountains. The Green Bank Telescope (GBT) in West Virginia, US, meanwhile, is in the middle of the 13,000-square mile US National Radio Quiet Zone. 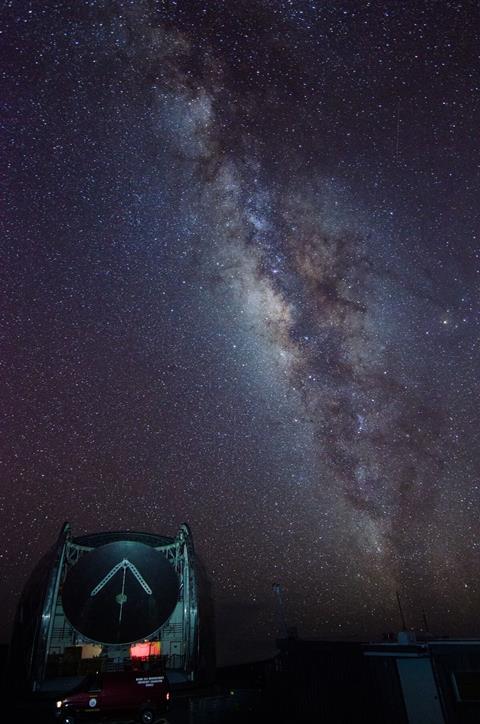 The sky above the Caltech Submillimeter Observatory

Here, the 8000 residents are allowed broadband internet and satellite TV, but not many other electronics ubiquitous in modern life. Close to the telescope, even spark plugs can cause an issue – meaning the telescope is served by a fleet of 1950s and 1960s diesel trucks. The telescope itself is aptly named by locals as the Great Big Thing: the largest steerable telescope in the world, it stands nearly 150m tall, weighs 7700 tonnes, and has a single 100m dish on top. Even so, it can be moved with millimetre-precision to point at exactly the required region of sky.

‘The first telescope I used was the Caltech Submillimeter Observatory, which was on the summit of Mauna Kea [a 4200m volcano in Hawaii],’ says US astrochemist Brett McGuire. ‘Unfortunately, it no longer exists. That was a fantastic telescope because you could get up and turn the knobs and dials yourself.’ McGuire is a postdoc, split between the National Radio Astronomy Observatory (NRAO) on the campus of the University of Virginia in Charlottesville and the Harvard-Smithsonian Center for Astrophysics in Cambridge. The NRAO is managed by the same not-for-profit organisation that also runs the GBT.

McGuire’s interest is the rotational fingerprints of molecules in the data collected by radiotelescopes. Every molecule produces a distinct set of spectra lines in the rotational spectrum, which correspond with the transition energies of the various rotational states of that molecule in the gas phase.

A favourite hunting ground of McGuire is Taurus Molecular Cloud-1, a very early stage stellar nursery. ‘In the visible and infrared, this region is completely opaque. If you look up at the night sky [in the Northern hemisphere], you can see that there’s a portion of the sky that’s blocked out with no stars. That’s this Taurus Molecular Cloud (TMC-1), blocking all of the star light from getting to us,’ he explains. ‘Eventually this cloud will collapse down to start forming stars, and then planetary systems, and all of the chemical material that we’re looking at in this source will be swept along and incorporated into that process. [Studying this region] gives us a way to look at the earliest chemical inventories that go on to form stars and planets.’ McGuire recently found benzonitrile in this location – the first benzene-containing compound and also the most complicated molecule to have ever been seen using a radiotelescope.

McGuire earned his undergraduate degree in chemistry from the University of Illinois Urbana–Champaign in 2005, and it was here that his love for astrochemistry began. He then moved to Emory University to complete a physical chemistry masters, and to the California Institute of Technology for a physical chemistry PhD, graduating in 2014. McGuire then relocated again to his current dual role on the US east coast.

At the Harvard-Smithsonian Center for Astrophysics, McGuire works in Michael McCarthy’s lab. There, he measures precisely the rotational spectra of molecules in the lab that are known or suspected to be in space, and how these species might form and react. Back at the NRAO, McGuire can use its radiotelescopes to scan the skies looking for emission fingerprints measured in the lab. ‘Living in both worlds gives me a unique perspective on the capabilities of the various sub-disciplines between astronomy and chemistry and the ability to talk to experts in both fields,’ he says.

McGuire and McCarthy are just starting out on a collaborative called Gotham – GBT Observations of TMC-1: Hunting Aromatic Molecules. Gotham was funded on the back of the benzonitrile observation, and will use the same approach to hunt for more aromatic molecules in that region of space. 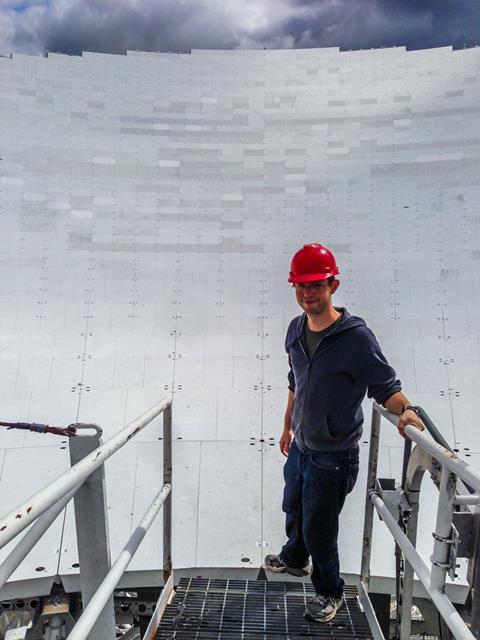 Around 10–25% of all the carbon in space is thought to be locked up in polycylic aromatic hydrocarbons (PAHs), formed from simple benzene-ring species such as benzonitrile, but nobody has ever observed one directly. It is this material that goes on to form stars and planets, and better understanding its composition should help answer some fundamental questions about solar system formation and the origins of life. PAHs typically have a weak rotational signal, making observing them using radiotelescopes challenging. It is hoped TMC-1 to be going to be a good place to look, owing to its very low temperatures meaning spectra lines observed are sharper and stronger than those in warmer regions and – theoretically at least – easier to ID.

McCarthy’s lab studies supersonic molecular beams of reactive species believed to be in space using Fourier transform microwave spectroscopy. Its role in the Gotham project will be to collect extremely accurate laboratory rotational spectra of individual PAHs, against which spectra from space can hopefully be matched. ‘We need to measure everything about a factor of 10 better than people have previously done,’ explains McCarthy. He will also, unusually for him, be operating a telescope. Gotham has been awarded 400 hours of time on the GBT, during which it must be constantly controlled. This can be done remotely – the team don’t need to physically be at the telescope.

McCarthy joined the Harvard-Smithsonian Center for Astrophysics as a postdoc in 1992, following an undergraduate chemistry degree at the University of Alaska and a physical chemistry PhD at the Massachusetts Institute of Technology. ‘I was really drawn to the idea of looking at these simple molecules and trying to understand their rotational signatures very precisely,’ he explains. His lab has now aided the detection of around 25 never-previously-seen molecules in space.

The Harvard-Smithsonian Center is a joint venture between Harvard University and the not-for-profit Smithsonian Institution. It has approximately 800 staff, of which around 10% – including, since 1997, McCarthy – are government employees. The largest benefit of this type of contract, he says, is consistent research funding. ‘But I do like to bring in extra research resources through grants.’

Like McGuire, McCarthy recommends being a jack-of-all-trades rather than the master of one to succeed in this field. ‘Astrochemistry is at the nexus of physics, chemistry and astronomy. To be successful it’s really important to have a broad background in lots of different areas,’ he explains. ‘There is a lot of emphasis on interdisciplinary research in today’s world and astrochemistry is a really beautiful illustration of that.’

Another key player in the benzonitrile discovery and the Gotham project is the NRAO’s Anthony Remijan. ‘I will be an advisor and project manager for the observations part of the Gotham project,’ he explains. He will also be a member of the rostered team remotely manning the telescope during the hours allocated to the project.

Remijan is an astronomer by training, earning his undergraduate degree from the University of Illinois Urbana–Champaign in 1996, followed by a masters from Iowa State University and a PhD from University of Illinois Urbana–Champaign. His first two-year postdoc was at the Nasa Goddard Space Flight Center in Maryland. ‘It was an independent fellowship that wasn’t tied to any specific NASA mission or directorate: I was free to choose who I worked with around the world. It was there that I formed a strong collaboration with Mike [McCarthy] and started doing radio observations with the GBT.’ In 2006, Remijan joined the NRAO as a postdoc, becoming a permanent staff member in 2008. ‘I love sitting in and working on the telescopes,’ he says.

Today, Remijan’s focus has switched away from doing research, although he does still have 25% of his time allocated to science. His ‘day job’, as he calls it, is management, and since 2014 he has run ALMA’s North American region centre. ALMA is owned and run by a large international consortium, and scientists from all over the world submit proposals to bid for slots of time to carry out their research on the array of telescopes. Those in North America do so through Remijan’s 30-strong team. ALMA works very differently logistically to the GBT, with dedicated operators onsite to control the telescope and collect data.

Remijan’s role involves frequent short visits to ALMA for meetings and a longer trip, once a year, for observations. ‘The site, in the high desert in the Andes, is amazing,’ he says. Each of the 100-tonne telescopes can be moved around over a 16 km2 area of desert with millimeter precision as required. ‘The telescopes are highly configurable,’ Remijan adds. ‘[ALMA] can run the entire gamut from solar system observations all the way out to the furthest things you can think of in the universe.’

Most of the NRAO’s scientific staff – including Remijan – hold a joint appointment with the University of Virginia. ‘A student that comes in can choose an NRAO scientist as a mentor and to do their PhD thesis with,’ he says. ‘I’ve graduated two students previously and currently have a student who is in her third year.’

Remijan says that the best part of his day job is working with the scientific community and ‘giving them the tools and data that they need in order to make that next big breakthrough in astronomy’. His Gotham collaborators concur. ‘Being able to identify a molecule in space, and be the first one to do so is a really cool thing,’ McGuire says. Galileo would probably agree.