Undergraduates in their element 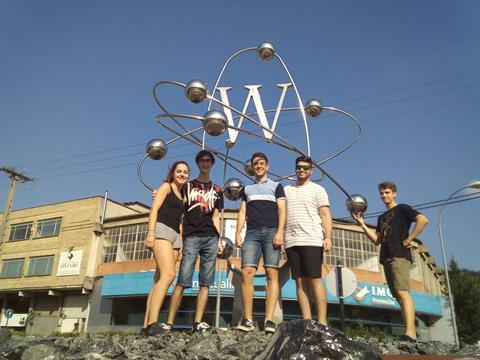 In 1783, Fausto and Juan José Elhuyar presented their latest discovery: they had successfully isolated tungsten, an element that had been identified a few years before by Carl Wilhelm Scheele. 150 years later, this discovery inspired a group of five chemistry undergraduates from the same city where the Elhuyar brothers were born – Logroño, capital of the wine region of La Rioja, Spain – to found an outreach group. They called it Vaya Elementos, a local expression that, to keep its adventurous spirit, could be translated into ‘The Free Radicals’.

‘We first got the idea while attending a summer school on the history of chemistry,’ says Víctor Sabanza-Gil, one of the co-founders of the group. ‘Then, motivated by some of our teachers, we decided to officially kick off the project, and to focus it around tungsten and the International Year of the Periodic Table [IYPT]. We prefer to call tungsten ”wolfram” though, as that was the original name the Elhuyar brothers gave it.’

The group put together a project proposal for an open call by the University of La Rioja for grants for scientific outreach activities. ‘It was really successful, something unprecedented for an idea exclusively put together by students,’ says Susana Cabredo-Pinillos, an associate professor at the university who, together with other teachers, mentored and advised the group.

With the support of the grant, the group started to visit regional high schools to give lectures about the local connection to tungsten and the importance of the periodic table, reaching over 800 students in less than a year. ‘High school students clearly felt more comfortable hearing about chemistry from us than their teachers,’ explains Carmen Bretón-Beltrán, another co-founder of the group. ‘I think being just a few years older helped us establish stronger bonds with them.’

Building on this success, the group also helped to organise a competition called ‘Adopt an element’. In total, 56 teams of high school students entered, each creating a video about an element in the periodic table. ‘We loved the video by the Iron Girls, who eventually won the first prize,’ says Bretón-Beltrán. ‘They made a great effort interviewing several experts from different fields, and despite being the youngest contestants their presentation during the finals was just outstanding.’

Beyond the positive impact on teenage students, Bretón-Beltrán values how the group transformed the vision of chemistry across their region. ‘We somehow ended up on the cover of the most famous newspaper in La Rioja,’ she says. ‘We even managed to give one of our tungsten promotional pins to former astronaut Pedro Duque, who is currently the [interim] Spanish Minister of Science.’ 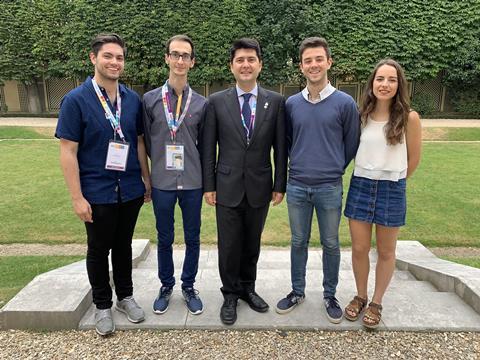 The international chemistry community also recognised their efforts. Iupac picked Sabanza-Gil to represent meitnerium in their periodic table of younger chemists. ‘It was a huge honour, especially since I am the only undergraduate in that exclusive line-up of chemists,’ he says. ‘But I am very aware that I would not be there without my group of friends. Collaboration was key to making our project successful.’

In another highlight, members of Vaya Elementos attended the Iupac Chemistry Congress in Paris earlier this year, despite being unable to obtain financial support to cover the costs of travel. ‘It was an outstanding experience,’ says Javier Blázquez-Martínez, another member of the group. ‘Travelling to Paris started almost as a joke, but we ended up saving up the money and taking the leap.’ During the congress, the members of the group had the chance to meet chemists from around the world, and they bumped into some of their chemistry idols ­– including Nobel Laureates Ben Feringa, Fraser Stoddart and Jean-Marie Lehn. ‘All of them went back home with one of our wolfram pins,’ says Blázquez-Martínez.

Javier García-Martínez, a researcher at the University of Alicante in Spain, and Iupac’s president-elect, is impressed with the group’s work. ‘Outreach is all about sharing your deepest passions and inoculating others with it,’ he says. ‘The members of Vaya Elementos have clearly excelled at this, becoming local heroes in La Rioja.’

After the IYPT ends, the group plans to expand its scope. Ideas include educating younger students, and they’ve already started giving lectures on critical thinking and scepticism that aim to fight against pseudoscientific trends such as homeopathy, reiki and miracle remedies.

Changes will also occur to the composition of the group. Pablo García-Porta and Adrián Moreno-González, the final two members, agree that their main goal now is to focus on their last year of studies and graduate before this summer. However, since the start of this academic year new members have been recruited who will follow the legacy of the original crew.

‘We have learnt valuable skills, and we want to pass these on,’ explains Moreno-González. Their impact is already making itself felt across the University of La Rioja; a group of students in the maths department has been inspired by Vaya Elementos to start their own outreach activities. ‘We are convinced we have positively impacted our local community, and couldn’t be prouder,’ says Sabanza-Gil. ‘Go wolfram!’