Who's Who: Probably the best job in the world?

Many chemists are tempted by the lure of brewing, but research jobs in the industry are becoming harder to find. Brewers are experiencing fierce competition from supermarkets and pub chains, says Paul Hegarty from Coors Brewers, UK, and are constantly having to drive down costs. The number of major breweries has fallen in the past decade and since these large companies are generally the only ones that can afford in-house research, fewer research posts are available. But chemists can still find great jobs in the brewing world. 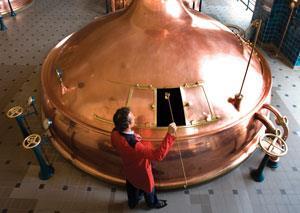 Chemists are employed in areas such as quality assurance, new product development and process development, says Hegarty, though not as many as 10 or 20 years ago. Bill Carling, co-founder of Carling Recruitment, UK, a recruitment agency for the brewing industry, agrees. ’There’s not as much demand as there used to be, sadly, because the number of big breweries is decreasing. The large breweries such as Heineken and InBev do research in-house. But the regional breweries don’t tend to have their own research facilities and will go to service organisations such as [Brewing Research International] BRI.’

BRI does research and testing on behalf of brewers. ’Almost half of the BRI staff are analytical chemists because we provide an analytical service,’ says Caroline Walker, BRI’s operations director. In fact, she adds, most of the chemistry that goes on in the brewing industry is analytical - connected with quality control and due diligence. ’At the BRI, for example, we develop new analytical methods aimed at things like food safety and quality control,’ she says. BRI also employs biochemists and microbiologists to deal with cereals and fermentation.

’Brewers will always have some chemists on site because they need to test the beer and make sure that everything is fine,’ says Walker. ’For anything more complex, requiring instrumentation, such as liquid chromatography and mass spectrometry, brewers will sub-contract the work out. There’s no way that most of the breweries can afford to have that kind of kit.

’If you look at the legislation coming out of Brussels, the detection limits that they’re looking for are continuously falling,’ adds Walker. ’That means that you’re going to need higher-end equipment in order to be able to achieve detection at those limits. So we have seen a trend over 10 years or more for breweries increasingly to contract out that type of analysis.’

A chemistry degree is a good starting point for people wanting to get more involved in brewing, says Walker. ’You might start in the lab working on quality control. But then if you take your brewing exams you may have the opportunity to move away from the lab. You could then perhaps go down more of a management route or get involved in other aspects of the brewery. Or actually get in there and brew the beer.’

Several institutions offer brewing qualifications. The Institute of Brewing and Distilling (IBD) in London offers a diploma in brewing and a master brewing course. Some companies, such as Coors, pay for their staff to do these courses, which can be spread out over a number of years. Alternatively, the International Centre for Brewing and Distilling at Heriot-Watt University in Edinburgh, UK, offers both honours and masters degrees in brewing and distilling. Two of the well-known brewing schools are in Germany: the Weihenstephan science centre at the Technical University of Munich, and the Research and Teaching Institute for Brewing (VLB) in Berlin.

Perhaps unsurprisingly, Walker thinks that the best jobs for research chemists in industry are with service providers such as BRI or Leatherhead Food International in Surrey, UK. ’If you want to get involved in more blue-sky research, you’ll probably have to go to a university,’ she says. ’There’s some really interesting research going on but most of that is being done in the universities now.’

There are also opportunities to work abroad. ’We deal not only with the UK, but with Africa, Australia and Russia,’ says Carling. The biggest growing market is in China where all of the big companies have breweries, he adds. South America is also strong and there is quite a good market in Eastern Europe.

In the UK, real ale consumption may be dropping considerably, but there is a great demand for lager. There are still opportunities out there for chemists, agree Carling and Walker. ’If any chemists want to send us their CVs, we’ll always look at them,’ says Walker. Well, what are you waiting for?

Emma Davies is a freelance writer based in Bishop’s Stortford, UK