Who's who: Santa's scientific helpers

Chris Walker is one of a team of scientists who spend their days subjecting toys to extreme abuse under lab conditions - smashing them up, setting fire to them, and dissolving them in acid.

He is a technologist at SGS, a global testing and certification company. All new toys have to undergo rigorous testing by a company like SGS before they can receive a certificate to show that they meet EU standards. Walker is based in the toy department at SGS’s labs in Bradford, UK. ’Within this department we have a toy side which does all of the physical abuse testing and a chemistry side that investigates the toxicity of elements in toys,’ he says. ’You do something different every day.’ 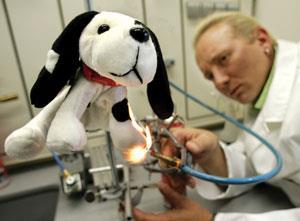 Teddies among the test tubes

’On the chemistry side, we simulate a child digesting toy parts so we dissolve the toys in acid at body temperature and then do a spectral emission test on them to measure the concentrations of heavy metals - deemed toxic under the toy standards.’ If a product falls below a standard, SGS tries to point the toy manufacturer in the right direction to rectify the problem.

In the UK, the standards come under BS EN71, which has a special section for chemistry sets. Lucy Richmond and her physicist husband, who run Curious Minds, a company that sells children’s science kits, remember the chemistry sets of their childhood. ’We could do a lot more stuff with them,’ says Richmond. ’With health and safety issues these days they’ve really toned down the chemistry sets.’

For SGS technical staff, the tests for chemistry sets are essentially the same as for other toys but higher levels of elements are permitted. ’The sets are for older children, and we have to assume that they won’t get into the hands of younger children,’ explains Walker.

’The regulations for chemistry sets are very stringent,’ says Alison Pilkington who develops products for John Adams, a UK company supplying creative craft, fashion, and science kits for children. ’They are laid out in terms of which chemicals are allowed, those which are not, and how many grams of each chemical are permissible per kit,’ adds Pilkington. ’Even if you’re talking about something simple like a plaster moulding kit, if you want to add felt pens then all the inks need to be tested.’

Despite the tough standards, developing new kits is still enjoyable. ’It’s always great fun to develop any new products, especially at the beginning of the process when we brainstorm ideas,’ says Pilkington. Each product manager takes personal responsibility for developing a product from start to finish and usually develops several items per year. ’For science products we would look at whether there is a gap in the market. It may be, for example, that there are some key scientific principles that younger kids are interested in but which have not been developed as science kits.’

For specialised science kits, John Adams works with companies in Hong Kong which employ teams of scientists to develop new products. ’Most UK companies outsource this type of expertise. It works a lot better,’ says Pilkington. ’We work closely with our partners to tell them what we need and are involved in fine tuning each stage of the development process.

’What’s important is putting the science into a fun context,’ says Pilkington. ’We try to design products with a strong educational content and linked to the national curriculum where possible. Without a lot of experience in this market it would be quite easy to come up with products that would do the job but be relatively boring. Selling through high street firms means making sure your company’s products really stand out.’