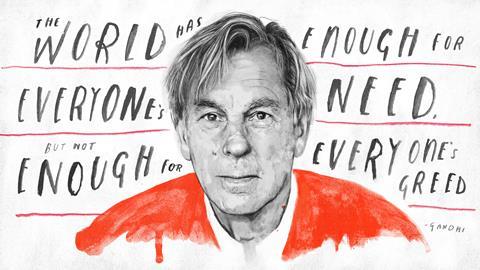 In situ with Bert Meijer

Bert Meijer is distinguished university professor and professor of organic chemistry at Eindhoven University of Technology in the Netherlands. He is considered one of the founders of supramolecular polymer chemistry.

My parents grew up during the second world war. They were people who had to work extremely hard to get things done during and after the war. And if you’re a child of such parents, you must do that as well.

I was not really interested in chemistry when I was at high school. At that time, I did everything except think about what the next step for me would be. Suddenly, I decided I wanted to go to university. I would have loved to do medicine, but I can’t stand the sight of blood. It was clear that I was a science person. Mathematics and physics were too abstract. And biology at that time was too much about looking at birds and trees. And so, in between, there was chemistry.

My PhD was the best time of my life. Being a PhD student means you can go your own way. You learn a lot at a critical period in life. My BSc in Groningen was okay, but I didn’t really get excited about chemistry back then. That changed completely when I met my PhD advisor Hans Wynberg. He was so excited about organic chemistry that he made me very excited as well. He was like a second father to me. Ever since working with him, I would say ‘I’m in love with molecules’.

After finishing my PhD, I worked 10 years in industry. I did my PhD in 1,2-dioxetanes chemistry. In industry, I was introduced to polymer materials, functional materials and electronics – totally different fields. And when I came back to academia, I wanted to bring these two fields together. This brought me into the field of supramolecular chemistry, and into the discovery of supramolecular polymers as materials. And now due to that supramolecular thinking, I’m really excited about the fact that we should achieve a paradigm shift in synthetic chemistry. Similarly, as we progressed from making simple molecules like urea and nitrobenzene to synthesising Vitamin B12, we now propose building multicomponent systems following a multistep noncovalent pathway, for example, in synthesising an artificial extracellular matrix.

I was still working in industry when our children were born. I didn’t have to work as hard as in academia, so I spent a lot of time with my kids when they were young. But when I started as a professor, I felt that I had to do incredibly well for all our students. Consequently, I spent a lot of time working. In retrospect, I probably should have spent some more time with our children. But I can’t change that anymore as I followed my love for molecules at that time. What I try to do now is to support younger colleagues who are starting families – I’m very supportive they do this differently.

I think universities should educate young people for the problems of 20–30 years from now, and not on the problems of today. And since no one exactly knows what those problems are, students should be free to work on things that have never been challenged, I’d call it blue skies research.

Working with young people is the most rewarding part of the job. The beauty of being a university professor lies in helping students and postdocs in their career, just as my PhD advisor helped me. There are many intelligent and ambitious young people, with all kinds of different backgrounds. As a teacher I can help them in this very important part of their career, into a direction that will change their life. I would never move out of academia again.

I used to play field hockey, but I now play tennis. I was my kids’ coach for a while. Also, since I come from the north of the Netherlands, we like to be on lakes with a boat. I’m also a big AFC Ajax fan, the football team, which is not easy in a town full of PSV fans.

The credibility of science in society is not on the same level as it once was. First, I think scientific knowledge has become less important in decisions made in societies. Science doesn’t seem to be important in political decisions. Second, societies are driven by economic growth. So, in many places now, research is directed to economic profit and I think the last thing that society needs right now is to see people who are already extremely rich, become richer.

‘The world has enough for everyone’s need, but not enough for everyone’s greed.’ This quote of Mahatma Gandhi is my favourite one to keep in mind for saving our world for our grandchildren and their children in the decades to come. Chemists should play a prominent role in this challenge and I feel even more involved since I became a grandfather earlier this year.

I don’t think that the public at large understands the incredibly important role of chemistry in the Covid-19 pandemic. Without the small molecules used as drugs many more people would have died. Without the plastics to protect people in the hospital, everyone would be infected. If there were no chemists involved with designing sensors, testing wouldn’t be possible. And don’t forget the eminent role of chemists in making vaccines. But you don’t hear chemists saying how important their science is, and how to tackle this pandemic. We should stand up and show our importance for all future challenges!