The curate who ministered to pneumatic chemistry 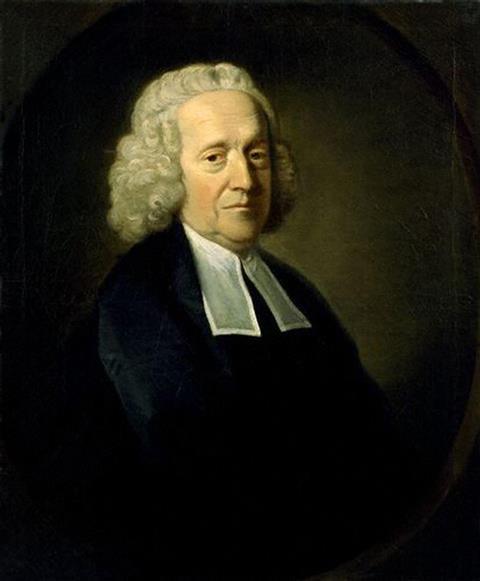 The idea of having a job for life (or even for a few years) has come to be seen as a bit quaint and old-fashioned. Those who work in the gig economy face a stress and uncertainty that those with ‘permanent’ contracts may not appreciate.

Long before employment law, in many European countries, the clergy was a route both to an education and to a stable, predictable career. Many a young man would angle for a quiet curacy out in the country. The life of James Woodforde, a country parson with livings in Norfolk and later Somerset, was utterly unremarkable but for the fact that he kept a daily diary for about 40 years. His parish duties interfered little with a life of fishing, hare-coursing, playing cards, and hanging out with friends to eat jugged hare, mutton, hot tongue and the odd pig’s face.

But for others the security of their living gave them the leisure and the headspace for wider pursuits. One of the most memorable of these would make key experiments to understand the movement of fluids in both animals and plants and invent the apparatus that would usher in pneumatic chemistry.

The Reverend Stephen Hales was born in Kent into a minor aristocratic family. Finishing his formal education at Cambridge with a Master of Arts in 1703, he was immediately elected a fellow of his college and continued his studies aiming to enter the Church. But his friend William Stukely, a medical student, started inviting him to science lectures that would have a profound impact on his life. Yes, he’d be a curate, but he would also conduct experiments.

Hales left Cambridge in 1709 for St Mary’s Church in Teddington. He was interested in understanding the flow of blood through veins and arteries. It is not clear whether he did ‘several haemastatical experiments on dogs’ with Stukely but he later continued ‘with Horses and other Animals to find out the real force of the blood in the Arteries’. The experiments involved inserting glass tubes into blood vessels to make observations and measurements.

Reading Hales’ work is quite bracing. His descriptions of his experiments on dogs – there cannot have been much of a shortage of strays – are as dispassionate as they are shocking. His friend, the poet Alexander Pope, was famously horrified. He made his feelings clear in an exchange with the antiquary Joseph Spence:

Spence: I shall be very glad to see Dr Hales, and always love to see him; he is so worthy and good a man.
Pope: Yes he is a very good man, only – I’m sorry – he has his hands imbrued with blood.
Spence: What, he cuts up rats?
Pope: Aye, and dogs too. Indeed, he commits most of these barbarities with the thought of it being of use to man. But how do we know that we have a right to kill creatures that we are so little above as dogs, for our curiosity, or even for some use to us?

200 years later we are no closer to resolving Pope’s dilemma about vivisection.

Hales then wanted to understand the flow of sap through plants but could not think of a way to do it. After accidentally pruning a vine ‘too near to bleeding season’ he tied a bladder over the cut. When it became quite distended it occurred to him that, just as in his animal experiments, he could insert a glass tube to measure the flow and pressure of the sap. He established that sap rose through a plant with water being lost through the leaves. He also cleverly established the mass balance of the water flow from the soil into the roots and out through the leaves. That led him to observe that plants take up and release gases – experiments that he described in his Vegetable Staticks. 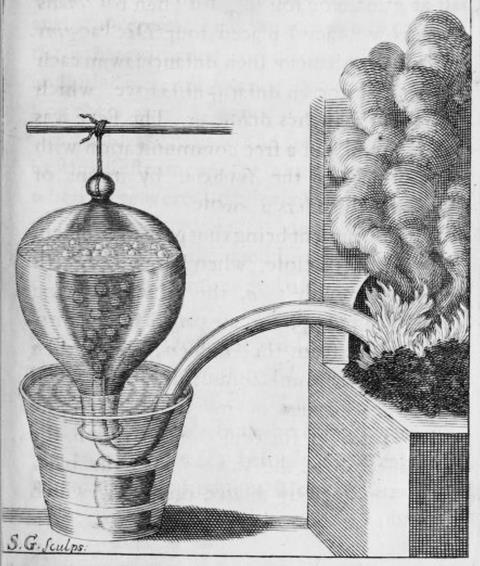 Hales now turned to fermentation and combustion, laying the groundwork for Lavoisier’s demonstration of the equivalence of fire and respiration. Hales began using a retort with its neck immersed in a basin of water as a way to observe expansion and contraction of the gas. But then he went one step further. Hales extended the nose of the iron retort with soft lead pipe that he could bend round to form a sort of syphon. Now when he burned something and gas was evolved, he could see it: bubbles rising up that could be trapped in a flask or jar filled with water.

The idea of using bubbles to make gases visible had been around for a while. An obscure experimenter in the Dordogne Valley in France, Jean Rey, had described transferring samples of gas from one jar to another under water. His experiments had even led him to suggest, in the 1630s, that combustion of metals involved the air ‘adhering’ to the metal. Robert Boyle’s contemporary John Mayow had also used water to trap gases under inverted cups and glasses to conduct combustion experiments by placing metals using ‘burning glasses’, experiments that Hales repeated.

But Hales’ device was truly revolutionary because for the first time there was a method for capturing gases as they were produced, allowing the product to be studied at leisure. Vegetable Staticks brought a new way of thinking about ‘pneumatics’ and about the physiology of plants and animals.

The trough became a necessary addition to the chemical laboratory. Henry Cavendish used one to collect ‘inflammable air’ (hydrogen). He also solved the ‘problem’ of collecting and storing water-soluble gases such as fixed air (carbon dioxide) by using mercury in place of water. A doctor and experimenter William Brownrigg devised a shelf to support the collection flask, the forerunner of the school ‘beehive’. And then Priestley took the trough to a new level, using it to conduct reactions between different gases (especially oxygen and nitric oxide) that he isolated by this downward displacement method.

What Hales had was time; time to think, time to experiment, time to learn. We all need security, and the time that comes with it, to think deep thoughts.

I am grateful to Thony Christie for the idea and discussions.