In situ with Prasanna de Silva

The influential Sri Lankan chemist on serendipity, slowness and the excitement of Irish percussion 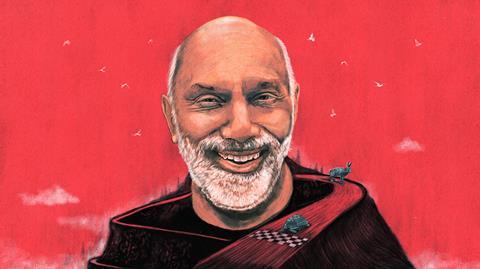 Prasanna (AP) de Silva is professor of organic chemistry at Queen’s University, Belfast, Northern Ireland. His influential work includes the invention of molecular logic gates, and the construction of phosphorescent sensory systems. He was speaking to Bárbara Pinho.

I was born in Sri Lanka. I’m still quite confused as to where I belong, but I’ve been lucky to work in Northern Ireland for quite some time now. I’m still very much Sri Lankan, though.

We were a very poor family. We didn’t have running water nor electricity. My grandfather, who was a primary school teacher in our little town, told me that maybe with education, I could make something of myself.

Sri Lankan children have an induction ceremony for literacy. Before they go to kindergarten or school, they have this ritual, it’s like something out of The Lion King. The person who conducts this induction into literacy is the teacher. And so, my grandfather would do this in our little house. This had a huge impression on me. He kept telling me that knowledge is a great gift.

My mother kept an eye out for science things. There was a bookshop near our house, which exhibited encyclopedias of science and technology in their window. We could never afford them. But then, there was a flood close to that bookshop, and they offered up the damaged books. My mother brought one home, and it was a prized possession of mine for a long, long time.

In many countries, children are forced into career paths, depending on what is fashionable. In Sri Lanka, if you were interested in mathematics, which I was, then you had to become an engineer. During high school there was this teacher called Errol Fernando. He influenced me greatly, and I declined to go down the path of engineering. I chose science and I have no regrets. And that’s where the chemistry started to happen. I am very much in my current position because of him.

Serendipity is a word that comes from Sri Lanka. It means happy accidents and my path had many of these. Serendipity has helped me with my science.

My grandfather kept telling me that knowledge is a great gift

At university, chemistry proved to be as nice as promised in high school. After finishing a bachelor’s degree, I wanted to carry on and study more, but by then there were no PhD places in Sri Lanka. Then a friend of mine ‘happy accidentally’ saw an advertisement from Queen’s University Belfast looking for PhD students. He took this advertisement to one of our teachers in Sri Lanka, who was from Liverpool. The teacher looked at this advertisement and said ‘I know the guy who advertised this.’ He then wrote back to the professor advertising and referred me and some colleagues of mine. And so, we went. This professor, Ron Grigg, helped me to be where I am now.

When there’s a challenge ahead, I tend to keep going much like the tortoise in the tortoise and the hare fable – I go slowly. I’m very grateful for being able to work with bright people. But at the same time, I think slowness gives me time to reflect.

One of my proudest discoveries happened by serendipity. A physics friend in the University of Colombo took the time to show me silicon logic gates. He took me to the lab, then I was able to work with them with my own hands. And then much later, I thought, ‘Oh, then we can make logic gates with molecules’ and we turned out to be the first ones to come up with this idea and a way of realising it. We were able to start off molecular logic as an experimental subject entirely. And now there’s over 1100 labs working on this.

I get to teach, learn and work with the brightest people, at the prime time of their lives. When someone starts a university degree, everything seems possible. There’s this special glow and I have tried to remember that this feeling exists in people younger than me.

Kindness plays a key role in academia. Otherwise, older researchers can get into a position of authority. And that’s not good for a younger person, especially a creative younger person; they’ve got to have that feeling of freedom. One of the ways in which they can have this is to have friendly and warm support. This is how I hope I’ll be remembered.

I drum and play percussion. I have done it all my life and it keeps me sane. I have been playing in a traditional Irish band for 22 years now. I find it a real tonic and wonderful experience. It gives me a chance to talk with people who are non-scientists and it shows me another side of the world. I wouldn’t use the word excitement in science, but I would use it in music. I play within the Irish music tradition, but I’m trying to introduce Sri Lankan tricks that I learned when I was a child.