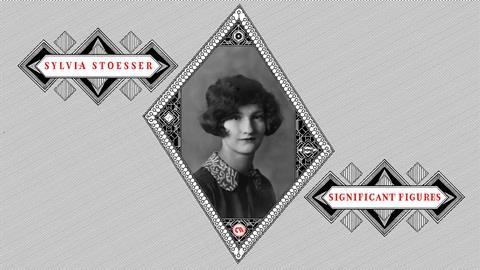 Rebecca Trager explores the story of a pioneering industrial researcher, named on 29 patents, but whose research career ended with motherhood

The year the US stock market crashed was when physical chemist Sylvia Stoesser’s career took off. She became the first woman researcher hired at Dow Chemical Company in Midland, Michigan, in 1929. Stoesser is credited with helping to invent styrene, as well as contributing to the development of Saran wrap (also known as cling film), vinyl plastics and Styrofoam. Her work also led to safer solvents for the dry cleaning industry, and it increased crude oil production.

Stoesser died aged 89 nearly 20 years ago, but the immense contribution she made to the field of chemistry – as well as to the chemical industry and Dow itself – has been increasingly recognised and celebrated in recent years.

Prior to her summer 1929 marriage to Wesley Stoesser, a fellow chemist she met during her studies at the University of Buffalo, Sylvia worked at the sugar laboratory of the National Bureau of Standards in Washington, DC, pursuing research to find a sugar substitute for diabetics. When in 1928 Wesley – then her fiancé – got a job in Dow Chemical’s Organic Lab, Sylvia made it clear that she wouldn’t be moving with him to Michigan without first finding work there.

‘I told Wes that if I came to Midland, I would have to have a job. I was determined to put my education to use,’ she is quoted as saying in a news article among the Sylvia Stoesser collection at the Iowa Women’s Archives of the University of Iowa Libraries. Her ultimatum sprung Wesley into action, and he helped her sidestep the customary interview and employment processes at Dow – a growing chemical company at the time. Several accounts, including one relayed by daughter Judy, describe how Wesley gave Dow’s wife Grace a ride to church and told her about his then-fiancée and how their marriage depended on both of them finding suitable work. Soon after, Herbert Dow hired Sylvia as a research chemist at Dow’s Physical Research Laboratory in 1929, before his death shortly afterwards. She would be the only woman and the only PhD in the lab at the time.

Only the two couples knew that the new hire was a woman before she started the job, according to the Stoessers’ daughter and others familiar with the history. ‘She was a great surprise,’ Judy told the Des Moines Register in 1991 after her mother’s death. ‘The other lab people were expecting Dr Stoesser to be a man.’

Stoesser’s active research career at Dow only lasted about 11 years, ending when she became a mother. She left the company when Judy, her only child, was born in 1940. At the time, it was quite revolutionary that a woman would place such importance on her career that she put off having a baby until nearly 40 years old.

But in scarcely more than a decade at Dow, Stoesser’s work spawned 29 different patents. ‘She was obviously brilliant, many of the things that she developed are still in use today,’ says Steven Zimmerman, an organic chemist at the University of Illinois, US. ‘She was really quite an intellectual force,’ he adds. ‘The fact that she got pregnant, that was basically the end of her career – the expectation was that she would not do laboratory work, and the rest of her life she would have to focus on her child.’ In fact, it does not appear that she ever returned to the lab.

Wesley’s push for Herbert Dow to hire his wife ‘suggests that he was probably pretty open to having an intellectually vibrant spouse, and supporting her as best he could,’ Zimmerman says.

While at Dow, Stoesser was the first to explore the use of organic acid inhibitors to stimulate production in oil wells, with five of her patents coming in that area. This work led to the creation of Dow subsidiary Dowell in 1932, which became a billion-dollar-a-year business.

In addition, Stoesser helped develop new ways to polymerise styrene into polystyrene. Indeed, 12 of her patents from the 1930s – widely seen as some of her most important work – involve various aspects of polystyrene plastic. ‘When we started research on styrene, it didn’t look at all promising,’ she is quoted as saying in another archive news clipping. ‘Development of styrene as a commercial product looked so impossible at the beginning.’

Stoesser’s work also revolutionised the dry cleaning industry. It gave rise to the dry cleaning fluid perchloroethylene (PERC), which was non-flammable and non-explosive and therefore safer than the combustible naphtha-based solvents in use at the time. ‘PERC turns out to be not a very environmentally-friendly or healthy chemical, and so there has been a movement to try and phase that out in the last decade or more,’ Zimmerman notes.

In fact, the US Environmental Protection Agency’s draft risk assessment of PERC, released in April 2020, concluded that the primary health risk from short- and long-term exposure to the chemical is neurological harm. The agency also found that the chemical presents environmental risks to aquatic organisms.

During her relatively short time at Dow, Stoesser produced patents with 15 of her male co-workers, and even collaborated with her husband on one of them, which focused on the stabilisation of polymerisable vinyl compounds. Only on one of her patents is she listed as the sole inventor, according University of Illinois’s chemistry department.

Multiple sources, including Dow itself, recount that Stoesser’s colleagues considered her ‘the finest woman chemist since Marie Curie.’ Even after leaving to raise her child, she continued working for the company as a consultant for some years.

Her Dow colleague Ray Boundy, with whom she published the definitive work on styrene in 1952, described Stoesser as ‘the scientist of the group’, recalling that ‘everybody went to her to try out their ideas and get help.’

You would expect that working in the all-male environment of an industrial chemistry lab at the end of the 1920s and through the 1930s must have been quite challenging for Stoesser. ‘It was, I am sure, very hostile – it was probably extraordinarily difficult to get anything done,’ Zimmerman says. ‘It would have been very unpleasant.’

Yet Stoesser herself describes the atmosphere of the Dow physics lab in fairly glowing terms in her chapter of the 1990 publication A History of the Dow Chemical Physics Laboratory. ‘In our laboratory no idea was discarded as being too crazy to investigate. In fact, we were encouraged daily to consider the impossible goal,’ Stoesser wrote. ‘Along with that freedom of thought and encouragement to try the impossible came many failures at the laboratory stage – but there were also many new product and process successes.’

Among those moved by Stoesser’s life and achievements is Yulan Tong, who earned her doctorate in chemistry from the University of Illinois in 1961 and joined Dow Chemical shortly thereafter. Tong never got to meet Stoesser, but says she was legendary at the company.

‘There were not that many women working in our field, and when we got together we talked, and I was upset because Stoesser was forced to resign,’ she recalls. ‘It is just through the grapevine, but I was told that it was suggested she resign – they didn’t fire her, and after her baby was born she was a consultant for Dow but inactive in the lab.’

Tong, who has since retired from Dow after almost 30 years, says Stoesser paved the way for women scientists at the company and beyond. ‘Because she was so good, she made our lives easier – the women who came after her,’ Tong recounts. ‘I never felt any discrimination working at Dow because my co-workers … came to me for help, and I asked them for help.’

To pay tribute to her, Tong established a lecture series at the University of Illinois in honour of Stoesser in 2000. The Sylvia Stoesser Lectures recognises women from outside academia who have made outstanding contributions to chemistry, and arrange for them to deliver a talk to students. These annual lectures, which were initially funded in part by Dow, continue.

‘She was a pioneer, and I think one has to wonder what would society be like if we allow people with that kind of talent and drive to fully realise their abilities,’ Zimmerman says. ‘She would have been a world-renown chemist had she lived in a later time.’

Stoesser was inducted into the Michigan Women’s Hall of Fame for her contributions to science and technology posthumously, in October 1992. Around the same time, Iowa State University established the Sylvia Stoesser Memorial Scholarship to provide annual support for women pursuing science and engineering careers at the university.

More recently, to mark its first anniversary of spinning off from DowDuPont in January, Dow had a grand opening for a newly remodelled building named the Sylvia Stoesser Center. It houses 350 employees, was made using sustainable materials, and features design elements like ‘mother rooms’ for nursing moms, gender-neutral restrooms, and ‘huddle’ rooms to facilitate collaboration.

Dow’s CEO Jim Fitterling recently suggested rebooting a 30-year-old commercial for the company that featured Stoesser. ‘Dr Stoesser created a new career path for women and for her company – the same company that leads the nation in patents granted to women over the last decade,’ the ad said. ‘We think Dr Stoesser would be pleased,’ it ended.