What is life? How chemistry becomes biology 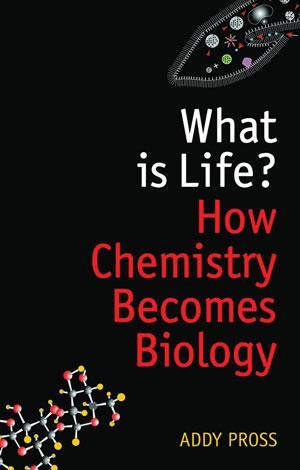 The question of how life on Earth (or indeed anywhere else) began is one that has been pondered and debated by scientists, philosophers and the common man throughout history. The title of this book repeats that of an essay written by Erwin Schrödinger in the 1940s. While it is not necessary to have read Schrödinger’s essay to understand this book, anyone interested in the knotty problem of life’s origins should probably take a look.

In Schrödinger’s essay, written before the structure of DNA was known, he tries to relate the macroscopic process of heredity to the quantum worlds of physics and chemistry. In his turn, Addy Pross addresses a related problem – what is it that makes some arrangements of matter ‘alive’? What (in the chemical sense) differentiates living matter from the same set of chemicals in a dead organism, or a piece of inanimate matter that has never been alive?

Pross suggests that there are two aspects to the origin of life problem. The first is historical – how did life actually emerge on Earth just over 4 billion years ago? To this, Pross claims we will almost certainly never find a satisfactory answer. The second, more important, question covers the general chemical principles and processes by which life could emerge, and identifying the driving force behind why it should do so in the first place – seemingly in defiance of the laws of thermodynamics.

To address this issue, Pross calls on the fundamentally different chemistry of replicating systems. Once a molecule (or set of molecules) can successfully replicate itself and acquires some mechanism for harvesting energy from its surroundings, it can break free from the shackles of the second law of thermodynamics. The system becomes governed by a drive for stability of the population, rather than the individual, and more efficient replicators quickly outcompete their rivals for the available resources. This chemical viewpoint neatly marries the chemical drivers of simple replicating molecules with the biological principle of evolution by natural selection, showing them both to be derived from the same set of rules.

Like any work in this area, the book asks more questions than it answers. However, it is a stimulating and thought-provoking read, and provides a sound chemical framework for considering the various theories and strands of research directed towards understanding the ultimate question – what is life?

Purchase What is life? from Amazon.co.uk. RSC members can obtain this book direct from the publishers for a 25% discount on the RRP. See the RSC member benefits page for details.