Mike Sutton delves into the actions and reactions of Victor Grignard

In August 1914 a million Frenchmen were called to arms. Among them was a 43 year old professor, restored to the rank he had held many years earlier during his compulsory military service. Corporal Grignard spent the early months of the first world war on routine guard duties, until the army realised that a world-class chemist might be more useful elsewhere. By 1918 he was one of the government’s chief scientific advisors, but when peace came he returned to academic life. Today, a century after his Nobel prize, organic chemists are still using the reagents he developed.

François Auguste Victor Grignard was born on 6 May 1871, in the French port of Cherbourg. His father, a sailmaker by trade, was a foreman in the dockyard. Grignard excelled at school, and gained a scholarship to a local teacher-training college in 1889. When that college closed two years later, he transferred to the University of Lyon to complete his course. Until then, mathematics had been his favoured discipline. But at university level he struggled to keep up with the curriculum and failed in his first attempt at the final examination.

After completing his obligatory year in the army, Grignard returned to Lyon in 1893 and gained his mathematics certificate. But meanwhile a close friend had persuaded him to take an interest in chemistry – somewhat reluctantly, as he had previously disliked the subject. This time Grignard found it more congenial, and in December 1894 he was offered a job as a junior assistant in the university laboratory. His employers encouraged him to study for a further qualification, and then to undertake research. In 1901 he submitted a successful doctoral thesis on the organometallic compounds of magnesium. 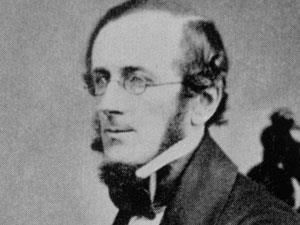 By then, organometallic compounds had been intriguing – and endangering – chemists for several decades. In 1848 Edward Frankland heated ethyl iodide with zinc in a sealed container, producing a substance whose formula was later shown to be C2H5ZnI. Shortly afterwards he prepared its methyl analogue. These compounds are highly reactive, as Frankland soon discovered. He reported that when he poured water into a tube containing a tiny residue of one ‘a greenish-blue flame several feet long shot out of the tube … which diffused an abominable odour throughout the laboratory’.

His supervisor, Robert Bunsen, feared at first that Frankland had been fatally poisoned, but fortunately he survived. Later, Frankland (and others) prepared more organozinc compounds, using them as intermediaries in a variety of organic syntheses. Unfortunately these reactions were difficult to control, and often gave poor yields of the desired product. Subsequent attempts to employ other metals – including mercury, copper, sodium and potassium – in organic synthesis met with varying degrees of success.

In 1898 Grignard’s professor at Lyon, Philippe Barbier, tried using an organomagnesium compound in a synthesis where the corresponding organozinc one had proved ineffective. Like their zinc analogues, organomagnesium compounds can react violently with water or atmospheric oxygen. To counter this, he brought his reagents together in anhydrous diethyl ether – a solvent which Frankland had sometimes employed for his own reactions.

Using this procedure, Barbier succeeded in converting methylheptenone to dimethyl heptenol by the action of methyl iodide in the presence of metallic magnesium, followed by cautious hydration.

The reaction proceeded according to plan, but the yield was not good. Barbier’s attempts to apply the method more widely failed to deliver consistent results, and after publishing a few preliminary observations he offered the puzzle to Grignard for his doctoral research project. 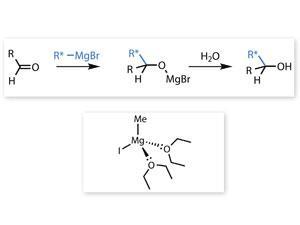 On repeating Barbier’s experiments, Grignard encountered similar difficulties, until he hit upon the idea of performing the reaction in separate stages. He began by gradually adding an ethereal solution of an alkyl halide to an equivalent amount of magnesium metal, submerged in anhydrous ether. The two substances combined to form an alkyl magnesium halide, later to become known as a ‘Grignard reagent’. It was protected from the atmosphere by a blanket of ether vapour, and to prevent the solvent evaporating away Grignard installed a reflux condenser above the reaction vessel.

With these precautions Grignard was able to prepare a wide variety of alkyl and aryl magnesium halides which remained stable in ethereal solution, while still retaining their potency. By gradually introducing them to organic compounds with suitable functional groups, and then treating the resulting complexes with water or a dilute acid, he could accomplish many useful synthetic reactions. One example was the breaking of a carbonyl bond in an aldehyde or ketone molecule to form a secondary or tertiary alcohol.

Some of these reactions released so much heat that the containing vessel needed to be surrounded with ice. Others, however, had to be encouraged with gentle warming, or a suitable catalyst. Grignard realised that the solvent played a key role in the success of his process, and he proposed that the organomagnesium halide molecule formed a stable relationship with one or more molecules of ether. Later researches proved him correct, and the complex – in which the oxygen atoms of two ether molecules each donate an electron pair to the magnesium atom – was shown to have a tetrahedral structure.

The significance of Grignard’s achievement was recognised by the award of the Institute of France’s Cahours prize in 1901 and the French Academy of Sciences’ Berthelot medal in 1902. Many other chemists adopted his process, and by 1908 it had featured in over 500 published research papers. His career blossomed, and after holding various university posts at Besançon and Lyon, Grignard accepted the chair of organic chemistry at the University of Nancy in 1910. In the same year he married Augustine Marie Boulant, and in 1911 the first of their two children was born. 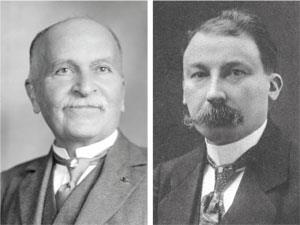 During the decade following his initial discovery Grignard continued to explore the potentialities of organomagnesium reagents, combining them with a wide range of compounds – including glycols, epoxides and cyanides – to generate many new products. He also took a keen interest in the terpene family of compounds, and synthesised a number of new ones (sometimes in collaboration with Barbier).

In 1912 Grignard shared the Nobel prize for chemistry with his fellow Frenchman Paul Sabatier, who had pioneered the use of platinum and nickel catalysts in the hydrogenation of organic molecules. Many (including Grignard himself) believed that it would have been more equitable if he and Barbier had been honoured together, with Sabatier and his collaborator Jean-Baptiste Senderens sharing the prize in another year. However, in his Nobel lecture Grignard generously acknowledged his debt to Barbier, whom he described as ‘my chief’.

In that lecture Grignard retraced the path leading to his discovery, and discussed the many possibilities which it had opened up. But in the conclusion he pointed out that much more remained to be learned, and asked: ‘With this extraordinary faculty of being able to adapt itself to the most varied chemical molecules, might magnesium not be capable of playing a very active part in the natural synthesis of organic matter?’

[[Grignard realised that the solvent played a key role in the success of his process. Later researches proved him correct]]He particularly commended the work of Richard Willstätter, who had recently shown that magnesium was a component of the substance which enabled plants to perform photosynthesis, noting that: ‘From his studies he concluded that compounds analogous to the organic magnesium compounds must form and that the absorption of carbon dioxide gas by chlorophyll would in every way be comparable to the Grignard reaction. However, it remains to be discovered in what form magnesium can adapt itself to these reactions in such an environment, an environment so different from that in which we are accustomed to seeing it triumphant. This is the problem for tomorrow!’

Unfortunately the problem for tomorrow soon had to be set aside in favour of more urgent tasks when Grignard’s career – along with millions of others – was violently interrupted. In the last week of July 1914, while he attended the annual conference of the French Association for the Advancement of Science, a quarrel between Austria and Serbia was dragging Europe into conflict. After the meeting concluded he departed for a seaside holiday, which ended prematurely when his mobilisation orders arrived on 2 August. 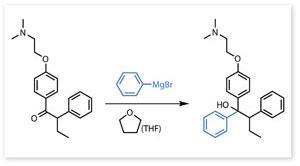 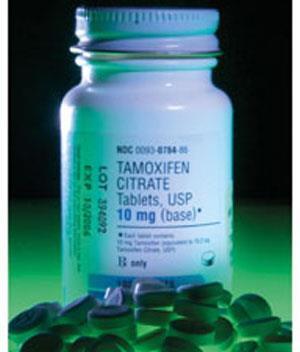 Following his brief spell with the infantry, Grignard was assigned the task of increasing the production of explosives. The pre-war supply of toluene was inadequate to manufacture the quantity of TNT (trinitrotoluene) which the military now required, and he set about finding new methods for producing it in bulk. When poison gases were deployed on the western front in 1915, his skills were also demanded in this area. At first, he and his colleagues sought to establish the chemical identity of the enemy’s gases and find appropriate antidotes to them. Later, they worked on the production of new gases for offensive use.

Soon after the US entered the war in 1917, Grignard made the hazardous Atlantic crossing as part of a high-level diplomatic delegation. By then he was a significant figure in government circles, but he had no desire to remain in that world permanently. When hostilities ended, he returned to his university chair at Nancy, and in 1919 he was called back to Lyon as the successor to Barbier, his former mentor. There he continued to pursue a variety of research projects, despite the demands of his administrative duties. One of his heaviest burdens was the preparation of a comprehensive reference work on organic chemistry, which remained incomplete at his death in 1936. Others continued the task, and the last of its 25 volumes appeared in 1953.

A century has passed since Grignard’s reaction earned him the Nobel prize, and throughout that period his process has remained a valuable aid to organic synthesis. Over the years, its area of utility has been significantly enlarged by the use of other solvents, such as tetrahydrofuran. This heterocyclic ether, formula (CH2)4O, is frequently employed for Grignard reactions which require temperatures above the boiling point of diethyl ether – for example, the synthesis of the breast cancer drug tamoxifen.

Tamoxifen was synthesised by the British chemical company ICI in the 1960s, in the context of a research programme aimed primarily at producing oral contraceptives. Its therapeutic potential was not fully realised until the 1980s. By 2003 it was estimated that more than 400,000 women are alive today as a result of tamoxifen therapy, and millions more have benefited from palliation and extended disease-free survival. Today, when university research must be justified in terms of its potential impact on society, it is vital to remember that scientific discoveries which appear at first to be of purely academic interest may eventually have massive consequences.

Another instance of the Grignard reaction’s continuing fertility is the research project which earned Ei-ichi Negishi of Purdue University in the US a share of the 2010 Nobel prize for chemistry. His development of novel ways to form carbon–carbon bonds, using a variety of organometallic intermediaries, started with attempts to create a new type of Grignard reagent. Grignard would surely have been delighted to know that his discovery was still helping to extend the frontiers of chemical knowledge 98 years after his own Nobel prize.