Alfred Werner’s careful experiments led to the discovery of what came to be known as coordination bonds. Mike Sutton looks at how he pointed the way to chemistry’s complex future

Alfred Werner’s careful experiments led to the discovery of what came to be known as coordination bonds. Mike Sutton looks at how he pointed the way to chemistry’s complex future 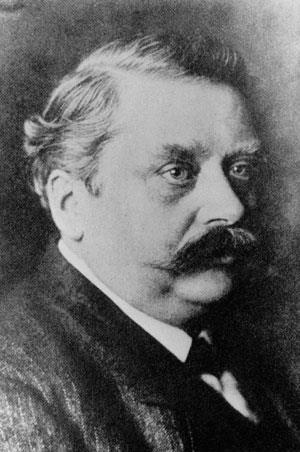 Indignant inorganic chemists might regard this as a confirmation of their speciality’s Cinderella status. But it might also be seen as a measure of Werner’s achievement. He began by seeking to explain minor differences in the properties of relatively insignificant compounds. And yet his work initiated a revolution in our understanding of how atoms can combine to form larger units, differing from the simple covalent and ionic compounds known at the time. Few chemists, of any variety, have made such a lasting impact on their discipline.

Werner was born in 1866, in Mulhouse in the French province of Alsace. His father, Jean-Adam Werner, was a foreman in an ironworks, but the major influence on Alfred’s upbringing was his mother, Jeanette, a daughter of the relatively affluent Tesché family. In 1871, as a consequence of the Franco-Prussian war, the Werners became subjects of Kaiser Wilhelm I and their home town was renamed Mülhausen. Alfred’s sympathies were with France rather than Germany, but he studied in both countries before settling in Switzerland. Shortly before his death in 1919 the Versailles treaty returned Alsace to France.

The path that led Werner to a Nobel prize was not entirely conventional. From 1878 to 1885 he attended a technical school, from which he might well have followed his father into one of the local heavy industries. However, his interest in chemistry led him to attempt experiments in a home laboratory, and at Karlsruhe – during his obligatory year of service in the German army – he was able to attend some chemistry lectures. After returning to civilian life in 1886 he entered Zurich Polytechnic to study technical chemistry.

Werner's conclusions were accepted as an extension of stereochemical theory

His biographer, George Kauffman, states that Werner’s motives for choosing Zurich remain a matter for speculation, while noting that Zür-Dütsche – the local patois – was similar to the Franco-German dialect of Alsace. Whatever the reason, the environment was congenial enough for Werner to stay on at the Polytechnic after graduating in 1889. While working there as a laboratory assistant, he became a research student under Arthur Hantzsch.

Werner gained his doctorate in 1890. In the same year, the principal results of his thesis on the stereochemistry of nitrogen compounds appeared in a high-status German chemical journal, with Hantzsch as co-author. After considerable controversy, their conclusions were eventually accepted as a legitimate extension of the stereochemical theory pioneered by Jacobus Van’t Hoff and Joseph Le Bel in the 1870s.

Van’t Hoff and Le Bel had shown that the optical isomerism of many organic compounds arose from the spatial structures produced when four functional groups were bonded to a single carbon atom. In their model, each group was located at one corner of a tetrahedron surrounding the central carbon atom. Werner applied the same geometrical logic to trivalent nitrogen compounds, placing the nitrogen atom itself at the tetrahedron’s fourth corner. This explained elegantly why certain nitrogen compounds showed optical isomerism.

Publication gained Werner some status, but did not get him a job. He spent several months doing advanced research in the Paris laboratory of Marcelin Berthelot, before submitting another thesis at Zurich. This was the habilitationsschrifte, required to qualify him for university-level teaching. It was accepted, and in 1892 he began teaching at the Polytechnic as a privatdozent – an unsalaried freelance tutor, paid directly by the students he could attract to his classes.

After a year of this academic apprenticeship, Werner was appointed an associate professor at the University of Zurich in 1893. Two years later he was promoted to full professor, having by then married a Swiss, Emma Geisker, and taken Swiss citizenship. Despite numerous invitations he remained at Zurich, gradually consolidating his reputation as a major figure in chemical research. Meanwhile, he also enjoyed a convivial social life there – apparently centred on chess, billiards, card games and alcoholic beverages.

The foundations of Werner’s achievement were visible in his habilitationsschrifte, but it was a sudden burst of inspiration during his year as a privatdozent that encouraged him to develop them into a fully-formed theory. His ideas were first published in 1893, in a relatively obscure journal, and initially they attracted little notice. But eventually his efforts led to the recognition of a new category of chemical compounds, and a thorough revision of the concept of valency.

The problem with multiple valency

When Werner began his research, the problem of how to deal with elements exhibiting multiple valency values had long been a subject of debate. Some chemists simply accepted the concept as a fact. Others argued that an element’s lowest valency was fundamental, and proposed ‘molecular compounds’ to account for higher values – thus PCl5 was sometimes depicted as PCl3.Cl2. And some attempted to preserve the principle of a single valency for each element by suggesting more complex molecular structures – as with the chlorides of iron, for example.

Unfortunately, the molecular weights calculated by physical chemists (using a variety of methods) were not always compatible with such formulae. This confusion about valency and molecular structure was particularly apparent in studies of the many colourful compounds composed of cobalt, ammonia and various acid radicals. First noticed in the late 18th century, their unusual properties had been investigated by several researchers, notably the Frenchman Edmond Frémy.

Christian Blomstrand in Sweden and Sophus Jørgensen in Denmark proposed long-chain molecular structures for these compounds. The substance we now know as hexammine cobalt(iii) chloride – Co(NH3)6Cl3 – was represented by Jørgensen as containing a string of connected ammonia molecules. Werner disagreed, arguing that the chemical properties of such compounds could be better explained in terms of a radically different kind of structure. This, he believed, required two distinct kinds of valency bond, which he called primary (Hauptvalenz) and secondary (Nebenvalenz). His proposed structure for Co(NH3)6Cl3 was more recognisable to modern eyes: six ammonia molecules bonded to the cobalt ion, with three chloride counter anions.

Werner claimed that the secondary bonds linking ammonia groups to the cobalt atom were different from the primary ones connecting the resulting metal–ammonia complex to the chloride radicals. He cited experimental evidence in support of this proposal, contrasting the behaviour of this salt with that of a slightly different one having the formula Co(NH3)5Cl3. Although the overall number of chlorine atoms in both molecules was the same, the quantity of chlorine precipitated from their solutions by silver nitrate was different in each case. This result indicated to Werner that in the latter molecule one chlorine atom was bound directly to the cobalt atom, so that the molecule ionised as [Co(NH3)5Cl]2+.2Cl–.

Werner also noted that when two more of the ammonia molecules surrounding the cobalt atom were replaced by chloride radicals, the resulting molecule yielded no free chloride ions. Furthermore, inserting another ammonia molecule into a non-ionic cobalt complex could displace a chlorine atom, making it available for ionisation.

Further support for these structures came from extensive measurements of electrical conductivity by Werner and his associates. The relatively high conductivity levels they found for solutions of compounds like Co(NH3)6Cl3 confirmed that they dissociated readily into ions. Compounds like Co(NH3)3Cl3 were effectively non-conducting, indicating that their chlorine atoms were not ionisable. Similar results were obtained with compounds where cobalt was replaced by other metals, chloride by other acid radicals, and ammonia by other atoms or groups.

In these complex molecules, Werner found that the number of atoms or groups clustered around the metal atom was normally a constant for that metal (for cobalt it was six). He called this the ‘coordination number’ of the metal ion, arguing that it resulted from a diffused sphere of attractive force, which was different from the metal’s primary valency. 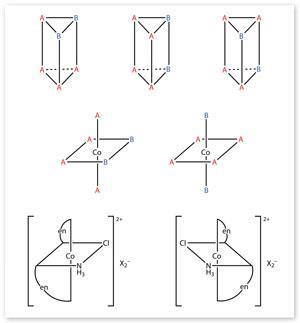 This conclusion suggested a further proposition to Werner, which he confirmed by an ingenious series of stereochemical investigations. He reasoned that if the six groups or atoms surrounding the metal atom were located at the corners of a hexagon, or a prism, then compounds of the type MA4B2  should exist in three distinct isomeric forms. However, if the six groups were placed at the corners of a regular octahedron, then only two isomers would be possible.

By 1907 Werner had shown that numerous compounds of the MA4B2 type appeared to form two, rather than three, stereoisomers. But failure to prepare a third isomer did not prove its non-existence, so he sought a more conclusive test. In 1911 he found one, by using a double-ended reagent – ethylene diamine, H2NCH2CH2NH2. Inserting the amino-groups of two of these molecules into four of the six available positions around a metal atom produced a mirror-image pair – not trio – of optical isomers.

This result elegantly confirmed Werner’s proposed octahedral structure for the cobalt-centred radical, providing further support for his concept of a sphere of secondary valence surrounding the metallic ion. When applied more generally, this two-level conception of valency threw light on other areas of chemistry. For example, since water molecules sat as comfortably as ammonia molecules in this secondary valence sphere, there was now a simpler explanation for the existence of water of crystallisation. 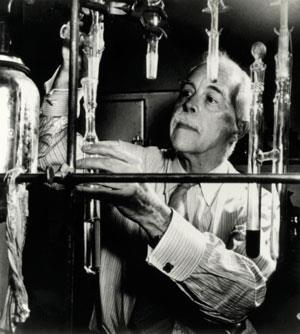 In his 1913 Nobel lecture, Werner could not explain how coordinate bonds were generated: ‘In spite of the vast amount of experimental data we are not yet able to characterise precisely the difference that exists between the two types of valence.’ However, he suggested that both kinds were due to electrical attraction, and that the difference between them was one of intensity. He mentioned briefly the role of displaced electrons in ionic bonding, but did not explicitly suggest that they also played a role in the coordinate linkages that were his special interest. Standing at the threshold of a new era, he was not quite able to cross over.

Two years after receiving his Nobel award, Werner was forced to give up lecturing by the arteriosclerosis that eventually caused his death in 1919. He was remembered as a methodical but cautious teacher, reluctant to set his research students overly challenging problems. Nevertheless, one of them, Paul Karrer, went on to win a Nobel prize in 1937. Werner’s published work inspired a number of scientists beyond his immediate circle to search for a better explanation of how atoms are bonded together.

Notable among them was Gilbert Lewis, the American physical chemist who pioneered the electronic theory of valency. In 1923, in his major treatise Valence and the structure of atoms and molecules, Lewis recorded his ‘personal indebtedness’ to Werner’s publications, which were an important stimulus to his own early work. Modern valency theory, developed by Lewis and subsequently refined by Irving Langmuir, Nevil Sidgwick, Linus Pauling and numerous others, is built on the foundations Werner laid.