India has a thriving pharmaceutical sector, with a booming business in generic medicines. This partly results from the skills in process reengineering developed in the days when the country only recognised patents on products, not on processes. India also has a strong fine chemicals sector, with many bulk pharmaceutical actives and intermediates sold at much lower prices than western companies could sustain.

However, western suspicion about whether confidential projects really remain confidential in light of the historical attitude to intellectual property (IP) has meant that pharmaceutical and biotech firms are much less likely to outsource their chemistry to India at the discovery end of a pharmaceutical product’s lifecycle, despite the potential cost savings. 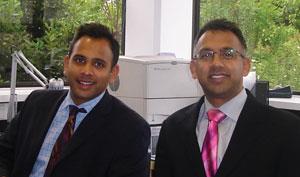 Oxygen Healthcare was set up by brothers Sunil and Prashant Shah to take advantage of the skills and cost benefits of doing discovery chemistry in India. Its front-end operation, based in Cambridge, UK, ensures that projects are managed and run to western standards. Sunil has a degree in biochemistry and Prashant was an engineer, but both have worked as consultants, Sunil for PA Consulting and Prashant for Accenture, where they gained experience in strategy, working for different pharmaceutical clients.

Their first foray into the world of the start-up business was with a website selling men presents for their wives and girlfriends, surpriseyourwoman.com, but they felt their skills would be more valuable in the pharmaceutical sector. Oxygen Healthcare was the result, with the brothers first consulting to a number of biotech companies. They then had the bright idea of setting up a chemistry lab in India for the biotech and pharmaceutical firms to outsource to.

’We did the numbers and decided it could work, so we went out to India, visited chemistry companies there, and thought we could start up without any capital as a front end for all these companies in India,’ says Sunil. ’But after about a day we decided it would actually be a very bad plan because you can’t control the quality unless you’re actually in the facility. So we scrapped Plan A and went for Plan B, which was to set up our own facility.’

The brothers had no input from outside investors and raised the capital needed to start the lab by remortgaging their houses. ’We went back to India and found some space in the second floor of a building in Ahmedabad,’ says Sunil. ’We didn’t think about it too much - just leased it for three years. But we had enough money to recruit our group leader, install three fume cupboards and employ three people.’

Ahmedabad was an obvious choice of location. It’s in Gujarat in the west of the country, with direct flights from London. The brothers speak the local language - their family is Indian (via East Africa). ’There’s also a great pool of talent there,’ Sunil adds. ’I think about 60 per cent of India’s pharmaceutical industry is in Gujarat so there are a lot of good people to pick from.’

The lab opened in April 2005, and by July they had 30 chemists, with 16 fume cupboards. They are in the process of expanding further, with eight more fume cupboards on the floor below. But they’re already looking at greater expansion in the near future. ’We’re purchasing a piece of land in a special economic zone,’ Sunil explains. ’This is government-allocated land that is privately owned; it’s like a science park. We’re going to build our own research lab in India, which could take around 400 people.’

Sunil believes the risk-return for venture capitalists investing in biotech companies doing drug discovery in the UK is not good. ’We feel that if you can do chemistry at a third of the cost in India, suddenly it could invigorate the development of IP in the UK, which would otherwise not be developed,’ he says. By outsourcing the chemistry research to India, where it is cheaper to do, he considers that the risk-return for the venture capitalists suddenly makes sense. ’They can do three times as much chemistry for their money, and they’re three times as likely to take a drug candidate further.’ 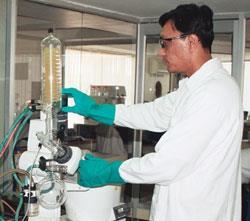 The brothers’ vision was to set up the sort of lab one might expect in the UK, but in India. ’We imported all the analytical equipment, and we’ve even got the same kind of safety and hazard procedures you’d have in the UK,’ Sunil explains. Saving money for the sake of it is not the idea. ’While costs can be saved by operating in India, we don’t want to be the cheapest. We want to be a good quality provider - as good as the UK - except it’s being done in India. We’re competing directly with [western companies], not just other Indian companies. We’re offering equivalent quality at a lower price. We’re never going to be the cheapest, but we think we’re low-cost enough, and still providing good service.’

Modern communication technology is key to the smooth (and economical) operation of the business on two continents, notably internet telephony. ’When you’re working in two countries, your communications have to be world class,’ Sunil says. ’In the lab, we have one wirelessly networked laptop between three people. There are also three webcams - for communications purposes, not for keeping an eye on them!’ Clients can log onto the webcams and see their projects in action.

The company describes the way it has optimised its business for speed and communications as ’sprint chemistry’. ’This means having the right people, operations and processes in place quickly, and we’re constantly trying to identify bottlenecks,’ Sunil says. Availability of starting materials can be a real problem in India, but Oxygen has a full-time person in house purchasing, following up and working out the best and quickest way to source chemicals. This may involve ordering products in the UK and then shipping them to India, cutting the delivery time from 10 days to 72 hours. ’We can only do this because we are a UK company,’ Sunil claims.

Confidentiality worries make western companies wary of outsourcing discovery chemistry to India, and Sunil is at pains to point out that they take it very seriously. ’We have very strict employment contracts, the sort of thing you’d expect in the UK. But the real key to keeping confidentiality is our employee retention rate, which is one of the highest in the sector.’ And one of the ways they ensure this remains the same is by fostering a ’family’ feel within the company. Employees are encouraged to join in the company’s community work, including building a community centre and a TB education project in the slum areas of Ahmedabad.

’We call ourselves a "family corporate",’ he says. ’We try to focus on other things, not just chemistry. We encourage everyone to take pride in the lab; we feel that reflects on the quality of the output. 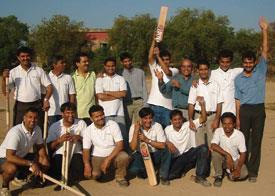 We play cricket every Friday morning, and the whole team turns up. We even name all our projects after cricketers - we’ve got project Tendulkar, project Atherton, and we’ve got an Australian client who’s working his way through the Australian cricket team. The guys in India love that! It all leads to an attractive place for people to work.’

Oxygen’s clients are mainly small biotech companies, but they are also talking to big pharma firms, says Sunil. The next step for the company is steady expansion, and Sunil anticipates the move into the floor below will increase the number of chemists to 45 in the next 12 months. By then, their new building should be ready and they will be in a position to expand significantly. ’We may just keep the team fairly small - we don’t think we want to be a 500-man business in terms of chemists. We may stay in the 50 to 100 range, but do other strategic things around what we’re doing.’

This, in all likelihood, will mean partnering with biotech companies to build their own operations in India, to an extent offering consultancy services but very probably taking a stake in the business. They are already looking at opportunities in this area, but nothing that can yet be announced - all Sunil can say is that they are working with ’some of the UK’s leading biotech entrepreneurs on collaborative opportunities which may result in spin-out companies’.

But Sunil is keen that chemistry will remain the main focus. ’India is a very fast paced environment - if you make fume cupboards in India today you’re a millionaire because labs are popping up everywhere!’ he says. ’The skill base is constantly growing, and if we see the opportunity of employing talented people in a slightly different area we may move into it. But we’ll always be in research, at the small-scale discovery end of the business.

’We’re excited by the early-stage science that’s going on today. We may even do our own research in future, in partnership with UK companies. There is a lot of IP coming out of the universities that no one is funding, so there’s an opportunity there. The ideal biotech company would have, maybe, a quarter of its people in the UK - such as a project manager and the heads of chemistry and biology, keeping the IP here - but do all the research in India. That way, you’d get the best of what you expect in both the west and the east.’