Physical chemists are finding themselves more in demand than ever. Emma Davies finds out why

Physical chemists are finding themselves more in demand than ever. Emma Davies finds out why

Physical chemistry is entering something of a golden era. Its tools have advanced dramatically in recent years, so much so that scientists from all disciplines are entering collaborations with physical chemists to gain new insight into their specialist subject areas. There is however some worry that the subject could become a victim of its own success, with fundamental research losing out in the funding stakes to applied science. 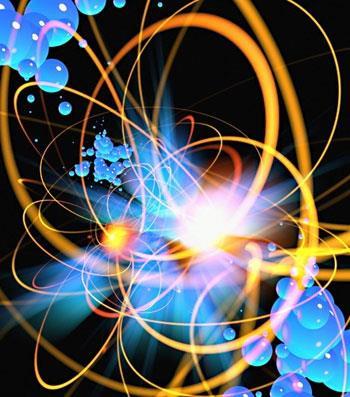 When it comes to applications, using physical chemistry for alternative energy projects can bring in substantial funding. Mark Johnson from Yale University, US, works on one such solar cell project, drawing on years of spectroscopy-based research into protons in water systems. ’Physical chemistry is having a renaissance,’ he says. Experimental and theoretical tools that have taken decades to yield reliable results are finally finding use, he explains.

Today’s physical chemistry pulls together experimental and theoretical methods to produce complex model systems which aim to reproduce real chemical processes and reveal what is happening at a molecular level, says Johnson. In a 2009 Nature Chemistry  paper entitled Experiment and theory in harmony, he said: ’with the overall perspective of contributing accurate, experimentally vetted, molecular level pictures of reactive pathways and relevant structures, physical chemists are in an excellent position to engage chemistry in all of its complexity.’ He believes that understanding processes at a molecular level is crucial to making grand scientific leaps forward. 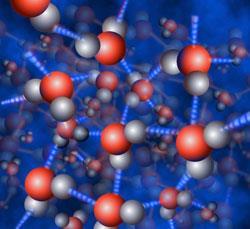 Johnson and his team are working to understand water’s proton chemistry at a molecular level. The researchers use gas chromatography-mass spectrometry (GC-MS) with an added infrared (IR) capability, which gives good structural information. Working at cryogenic temperatures in a rare gas atmosphere, Johnson’s team can freeze small numbers of water molecules (as few as 10 at a time) and study the resulting ’crystal’ structures. ’Very cold ions are nice objects. We’re not dealing with floppy systems at room temperature which are hard to characterise,’ he says.

Johnson’s fundamental research has found several applications, one of which is fuel cell development. As part of a major US National Science Foundation-sponsored collaboration called Fueling the future, his team is using IR spectroscopy to see how protons are accommodated in imidazole nanostructures. The project is based at the University of Massachussetts at Amhurst, US and teams are currently working on fuel cells containing alternatives to nafion, a fluoropolymer-copolymer which is a good proton conductor but fails in meeting contemporary demand for high temperature operation.

The Yale researchers are also using their spectroscopic tools to help design new catalysts. ’It’s old school: Arrhenius [acids forming hydrogen ions in aqueous solutions] and what is really going on in an aqueous solution,’ says Johnson. ’I love that stuff.’

Such fundamental science really fires Johnson. He is aware of a global move away from funding fundamental science but is not overly concerned. Fundamental science has long been ’directed’, he says, and certainly was in his field when he started out over 30 years ago. ’It’s always up to leaders in the field to nurture the basic fundamentals while pointing the whole ship towards some possible application,’ he says.

This is exactly what Eckart Ruehl, professor of physical chemistry at the Free University of Berlin, Germany, does. His research contains both fundamental and applied elements. Ruehl uses spectroscopy to study nanoparticles, looking for example at how they penetrate the skin. He also studies properties of single aerosol droplets, how pesticides stick to particles and what their fate is in the environment.

’I like fundamental research yet if I were to focus solely on such research I would have far fewer collaborators,’ he says. He is somewhat disheartened by today’s move towards applied research, which is partly due to changes in societal expectations, he says. ’When I was a student people worked on very academic and fundamental projects and now people ask: "what is it good for?"’

’Progress comes from fundamental understanding and if people go too fast into applied research, there is a danger that innovation is limited if people become too tied to possible practical results,’ Ruehl warns.

In May 2010 he attended the German Bunsen Society of Physical Chemistry’s annual meeting. The conference programme clearly shows how applied research is becoming ’more powerful and accepted,’ he says. The subtitle of the Bunsen conference, Out of the vacuum - through the liquid - into the cell, illustrates how physical chemistry is now routinely crossing life science boundaries. The message is that complex physical chemistry at solid-gas and solid-liquid interfaces is important to help understand transport mechanisms of molecules into and out of biological cells.

Such interfacial chemistry is also vital for solar cell development. Organic and polymeric solar cells are typically made of organic dye molecules grafted to the surface of an oxide material and physical chemists are well equipped to analyse what happens when a photon is adsorbed by the dye molecules and the energy transferred to the oxide material.

Ruehl is organising next year’s Bunsen meeting. He predicts a focus on ultrafast processes such as femtochemistry. ’There is a bias towards control of ultrafast processes and everything you can do with ultrafast lasers,’ he says. ’People don’t want to only be spectators - they want to actively change things.’

By this reasoning, de Vries could himself be described as a classical physical chemist. He uses double resonance spectroscopy to estimate how DNA bases behaved under the short wavelengths of ultraviolet (UV) radiation at the time of the origin of life. His team has discovered that the Watson-Crick bases that make up our DNA appear to have unique photochemical properties, giving them a special stability. ’It’s something we had no clue we would stumble upon when we started looking,’ says de Vries. The study came about almost by chance when he was using molecular beams to study species in the vapour phase, but limited to analysing small, isolated, molecules. ’We had the idea that if we could make larger molecules fly then we could look at other, more complex systems such as DNA bases.’ They managed to overcome the problems thrown up by the low vapour pressure of the DNA bases and the fact that they tend to decompose when heated. By transferring the biomolecules into the gas phase and studying them in isolation, de Vries and his team have effectively taken biology out of the equation. ’We’re finding properties from the time when there was no biology,’ he says.

They are looking at the mechanisms by which the molecules diffuse damaging UV radiation. ’The DNA bases can get rid of energy in a very efficient manner, which we’re beginning to understand. We think that this may have helped them on early Earth before the ozone layer formed,’ says de Vries. The researchers are now looking at molecules other than DNA’s nuclear bases - guanine, cytosine, adenine and thymine - to help understand why Nature chose these bases. ’We’re also beginning to study these things at femtosecond timescales, trying to actually observe them in real time and to understand at a molecular level the self-healing process against UV,’ explains de Vries.

Vasilios Stavros, a chemist at the University of Warwick, UK, is also focused on the question of why Nature selected these particular molecular building blocks. In work that complements that of de Vries, he is looking at how biological molecules behave under UV radiation. 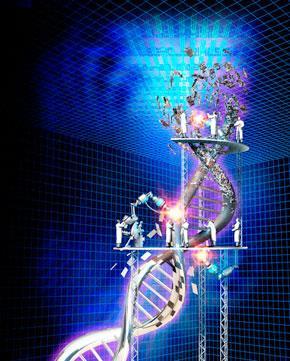 Stavros is co-organising (with fellow physical chemist Giovanni Costantini) the 2010 conference for Recent appointees in physical chemistry in Warwick, UK, from 6-8 September. This will offer help and encouragement to those embarking on the funding trail. Talks will cover subjects such as how to write a successful grant application. At past meetings, physical chemists have gained courage by sharing their concerns, particularly over grant chasing. One of the people talking at the Warwick meeting is Mike Ashfold, professor of physical chemistry at the University of Bristol, UK, and current president of the RSC’s Faraday division.

’One problem that experimental physical chemistry has is that it is inherently expensive,’ says Ashfold. ’The research that I do involves reasonably high vacuum, lots of lasers, and a range of reactors for exploring molecular photochemistry, thin film deposition and for growing diamond. Such sophisticated and specialised equipment makes this kind of physical chemistry expensive,’ he says.

’There is no doubt that the average UK physical chemist trying to do this kind of research is now falling behind many competitors outside the UK, for example some of our German colleagues based in Max Planck Institutes,’ adds Ashfold. ’The level of resource going into such centres there for selected areas of experimental physical chemistry is substantially higher than that going into most UK universities.’

Despite such difficulties, Ashfold runs a highly successful research team and last year was elected a fellow of the UK’s Royal Society. Part of his team’s research focuses on the chemical vapour deposition of diamond films, and in applying spectroscopy to diagnose the plasma (partially ionised gas) used to grow them. ’A lot of the exciting research at the moment in the area of quantum computing is based on specific defects engineered into diamond, so it’s quite a hot topic,’ says Ashfold. 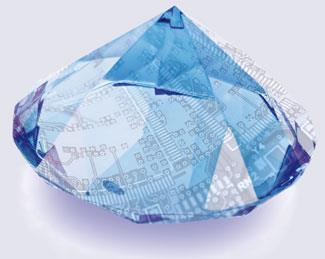 Pure diamond is an insulator, but can be rendered semiconducting by insertion of other elements (doping). P-type diamond, where dopant atoms increase the number of free positive charge carriers, is now routinely grown but one of the ultimate goals is to find an utterly reproducible way to make n-type diamond, where dopant atoms create an excess of negative electron charge carriers. Forming the equivalent n-type diamond is very challenging, he says. For most p-n junction applications, both halves of the junction should ideally be based on the same substrate, explains Ashfold. ’Diamond would be electronically superior in every way.’

This sounds as difficult to achieve as Johnson’s ’biggest challenge’: understanding how protons move on a molecular level using spectroscopy and quantum mechanics. The Yale chemist would like to be able to put together a proton rule book that others could use. He would also love to be able to use his physical chemistry tools to solve the age-old chemical riddles regularly handed to him by his organic chemistry colleagues. ’They have a wish list of problems they would like us to solve,’ he says.

Johnson has every hope of one day answering all of their questions. Physical chemistry, with its insight into molecular processes, has much to offer and many of its researchers are excited by what the future holds. As Warwick’s Stavros says: ’chemistry is merging and different pieces of the puzzle can be solved by different areas. That’s what’s exciting about chemistry now - we can tackle some really big problems.’