A combination of medical research and engineering could bring an end to the era of putting precious human organs on ice to keep them alive for longer. Michael Gross reports

A combination of medical research and engineering could bring an end to the era of putting precious human organs on ice to keep them alive for longer. Michael Gross reports

This is the time of year when many of us will be most conscious of our livers - feeling guilty for having subjected them to a sustained period of abuse over Christmas. But Peter Friend, professor of transplantation at Oxford University in the UK, thinks this highly complex organ is underappreciated and far too little understood. 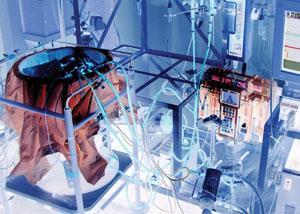 The liver, he points out, is unique. It has the power to regenerate itself - so if a part of it is removed surgically, stem cells contained in the remaining tissue will ensure that the organ grows back to its original size. And yet, current medical provision has virtually no way of exploiting this ability. There is no equivalent to kidney dialysis for patients suffering from liver disease, which means a patient’s liver cannot be left to rest and rejuvenate, whilst its function is supported externally. As the liver has vital roles in the control of nutrients and other crucial substances in the bloodstream, acute liver failure is typically a death sentence unless a suitable donor organ is found and the patient is able to undergo a transplant in time.

In an attempt to change all this, Friend has teamed up with Constantin Coussios at Oxford University’s department of engineering science, in one of many interdisciplinary collaborations that will be at the heart of the new Institute for Biomedical Engineering, due to open on Oxford University’s Churchill Campus in April of this year. Friend and Coussios have developed a device that will keep donor livers alive and ’happy’, as Coussios puts it, outside the body, supplying it with normal oxygen, temperature, and nutrient conditions, for at least 72 hours.

The researchers had three main engineering challenges to overcome, as Coussios explains. First, he says, ’this is the longest period of closed loop blood circulation entirely outside a living body.’ The main concern arising from this is the loss of red blood cells due to mechanical damage. Coussios and his fellow engineers had to redesign every part of the circuit in order to avoid the blood cells being subjected to excessive levels of shear, which causes most of the damage. Gate clamps pressing tubes together in order to regulate the flow, as commonly used in the clinic, are absolutely out of the question for this system - smooth, uninterrupted channelling is essential in every part of the artificial blood circuit. Moreover, Coussios’s group is developing a new kind of continuous flow ultrasound detector to monitor the quality of the blood going round and ensure there is no loss of red blood cells.

The second challenge is the collection of waste fluids (ascities) ’sweated’ by the liver during its preservation - which must be recirculated to maintain a constant volume. The liver also produces small volumes of bile, which must be removed. The third challenge involves the liver’s highly complex response to blood pressure and other physiological parameters, which may result in unexpected changes to the width of the organ’s blood vessels. Currently, Coussios explains, ’these changes are handled in a non-predictive way. We change parameters very slowly, giving the organ time to adjust.’ Ultimately, however, he wants to apply predictive methods whereby the controller, or even a computer program controlling the set-up, can know in advance how the organ will react and adjust the parameters perfectly according to its needs. ’This has never been done before,’ Coussios says. ’Basically, we want to keep the liver happy and make it believe it’s never left the body.’

The most immediate and urgent application for this technology is in organ transplant medicine. Throughout the industrialised world, the demand for donor organs is increasing faster than the supply, and thousands of patients are dying while waiting for a replacement organ such as a liver or a heart. According to the United Network for Organ Sharing, a US-based organisation that gathers transplant data, just under 17 000 people were on the national waiting list for a liver by the end of 2007 and fewer than 5000 transplants were carried out during the year.

Being able to keep a liver alive for three days or more - as opposed to the 12 hours the organ can be kept on ice - will improve the chances of matching up a suitable recipient with a donor, and save lives.

For this type of application, Coussios says his group is ’one step short’ of a workable prototype. By the summer, he hopes to have that prototype and use it in clinical trials. In the long term, livers destined for transplant could not only be kept alive but possibly even improved during their storage time. As Friend points out, the device could be used to reverse damage caused by fat deposits, or to fine-tune the organ immunologically to the needs of the recipient.

Have heart, will travel

Keeping organs for transplant in a warm, live state is a general aim in transplant technology, and companies such as US-based TransMedics, in Andover, Massachusetts, and Organ Recovery Systems in Des Plaines, Illinois, are already testing devices to keep hearts and kidneys transplantable for longer.

TransMedics has developed what it calls the Organ Care System, which is essentially a portable heart-lung machine that keeps the donor heart beating during the whole transfer. For this, the machine uses donor blood and a gas pump that delivers oxygen in pulses, mimicking the breathing process. It also controls temperature and humidity, and excludes contamination. The first transplants of such beating hearts were carried out at Bad Oeynhausen, Germany, last year, followed by clinical trials in Cambridge, UK, and in other European locations.

Up to now, over 20 donor hearts have been transplanted with the help of this technique and have so far shown improved survival rates compared with hearts preserved on ice, which is the usual procedure. For hearts, the damage resulting in the lack of oxygen supply, known as ischaemic damage, is the key issue. Research has shown that donor hearts that have been without oxygen for less than one hour reduce the recipient’s risk of dying within the first year by 40 per cent, compared with hearts that have been starved of oxygen for five hours. And much longer waiting times on ice make the heart unusable. Surgeon Bruce Rosengard, who carried out the first trial in the UK, said the technique could double or even quadruple the number of hearts that reach the recipients in a suitable condition to be transplanted. Moreover, the machine allows surgeons to assess the heart in action before they transplant it.

US company Organ Recovery Systems is testing a similar approach but focusing on kidneys. Its LifePort device is also in clinical trials and has already become a media star, winning awards for its design and appearing in the TV series CSI New York.

But Coussios insists that his extracorporeal liver, technically known as a Normothermic Liver Perfusion Device, is unique in its ability to keep a liver - with its specific set of challenges - in normal physiological conditions for three days or even longer. In fact, the current benchmark of three days is limited mainly by the fact that the experts looking after the system need to catch up with their sleep at some point. Nobody knows for how long the system could work once the controls are fully computerised. At that point, the level of sterility that can be maintained in a real-life situation, outside a clean room, is likely to become the limiting factor, says Coussios. 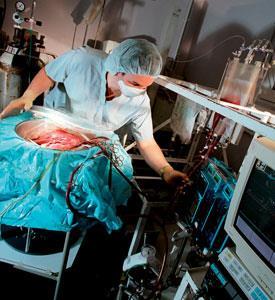 Researchers expect to have a workable prototype in clinical trials

There two other medical areas where the disembodied liver could provide a benefit - not by being transplanted but by serving as an alternative liver to be connected to a patient, while his or her own liver is temporarily out of commission. Firstly, for patients with acute liver failure, as Friend explains, an auxiliary liver could represent an approximation to the kind of help kidney patients routinely receive from dialysis.

Since the liver has the capacity to rebuild itself, says Friend, ’in many cases, it is just a question of keeping a patient alive for two or three weeks, while his liver regenerates.’ If an external liver could help to bridge this time, a transplant - with all the associated trauma of major surgery and immune system suppression required to prevent the organ from being rejected - might not even be necessary.

Another important non-transplant option involves chemotherapy for cancer. ’The liver is a common site for secondary cancers, when the primary is in the intestines,’ Friend says. While the liver metastases are often the only ones, they are extremely difficult to treat. With the option of an extracorporeal liver stepping in, doctors could disconnect the patient’s own liver from the circulation and flood it with specific chemotherapy agents without having to fear side effects in other parts of the body. In the long term, Friend expects, this kind of switching around of livers could also help to target gene therapy or antiviral therapy directly to the organ, where it is needed.

In spite of the complexities and challenges, the liver is a prime target for such extracorporeal organ research. This is because, for thousands of patients with liver failure, there are no treatment options. If they do not find a donor organ fast they will die. And most of these patients, as Friend stresses, have not brought the conditions on themselves by reckless drinking. Fatal liver disease is more often caused by viral hepatitis C than by alcohol abuse. So once the device is ready for clinical trials, they will be organised with urgency, as the technique looks set to save a significant number of lives.

And once the extracorporeal liver is fully under control, Friend and Coussios want to extend their approach to other organs of the abdominal space, namely kidneys, pancreas, and spleen. This could mean that the insulated containers that are rushed to surgical theatres by emergency teams could soon be locked away in the vaults of medical history.

Michael Gross is a science writer based in Oxford and an honorary research fellow at the School of Crystallography, Birkbeck College, London, UK