Rapid rise of a team player

A passion for science and rugby has shaped Duncan Graham's career. He talks to Andrew Scott about his work and aspirations.

A passion for science and rugby has shaped Duncan Graham’s career. He talks to Andrew Scott about his work and aspirations.

Duncan Graham is a professor in the department of pure & applied chemistry at the University of Strathclyde and a co-founder of the university’s centre for molecular nanometrology. He recently received the Nexxus award for young life scientist of the year for his impact on research in the west of Scotland’s life sciences sector, and he manages a busy and productive research team with more than 30 members. But when asked about his greatest hope for the future he breaks into a grin and immediately declares: ’For Scotland to win the Rugby World Cup’.

It is not just a flippant remark, because Graham’s passion for rugby has been an important determinant of the whole course of his life and career, ever since his childhood in Chirnside in the Scottish Borders where the rugby tradition is very strong. 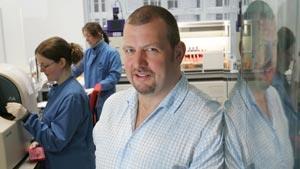 As a Scot, it was natural for Graham to study in Scotland, but the reason for choosing the University of Edinburgh for his chemistry degree was ’because they had better rugby clubs in Edinburgh than they did in Glasgow, St Andrews or anywhere else like that’. He takes the trouble to emphasise that he is not joking, and that rugby was without question the overriding factor in his choice.

The decision led to a rather impressive rugby career, including membership of the Scotland under-19 squad and captaining the Edinburgh Wanderers and Edinburgh Academicals teams. ’I stopped my PhD to spend a season playing in Australia, and at one point in Australia I think I was the only player in our side without a national cap.’ His voice reveals a mixture of pride and perhaps a little regret that he never managed the final step up to the highest level.

The magic of DNA

More significantly, however, the choice of Edinburgh would also lead him to develop a fascination with DNA, nurturing a seed that had been planted by a school teacher some years earlier.

’Our biology teacher, Mrs McDermid, showed us the film The double helix as part of sixth year biology,’ he recalls. ’I remember being quite taken by this and thinking DNA is an absolutely wonderful thing.’ So when the opportunity arose to pick an honours year project, Graham jumped at the chance to do some DNA chemistry with Tom Brown (now a professor at Southampton University) as supervisor.

The honours project led to a PhD with Brown, exploring the medical potential of anti-sense DNA. This established an enduring link with the chemistry of DNA and with research at the interface of chemistry and biology. ’Without doubt Tom Brown has been a major influence on my research interests,’ he acknowledges.

The link with the University of Strathclyde was only meant to be a short one: ’It was supposed to be a three-month postdoc while I was writing up my PhD, but the three months led to a career due to the influence and guidance of Ewen Smith [professor in the department of pure & applied chemistry].’

The career began in earnest with a five-year personal fellowship from the BBSRC. This gave Graham the freedom and resources to embark on life as an independent researcher. He appreciates the fact that he was treated as a member of staff, but without the teaching burden that a new lecturer would have. The downside, however, was the lack of long-term job security.

’To begin with I was absolutely delighted to have the freedom to explore my own ideas, but about one year into it I began to think, well. what is going to happen after this?’

Fortunately, the research went very well, bringing many papers and a smooth transition into being a permanent member of staff when the fellowship ended.

Appointed lecturer in 2002, senior lecturer in 2003 and professor in 2004, Graham has risen rapidly to the state where, at the age of 35, he says he is very happily established at Strathclyde and has no intention of looking to move elsewhere.

Sensors for the future

One of his major priorities at present is the work to commercialise some of the Strathclyde group’s developments on diagnostic sensors. His enthusiasm is obvious as he declares: ’We believe we have techniques that can offer new ways of measuring molecules and their interactions with better sensitivity and with increased data per experiment.’ Some of the medical diagnostic possibilities are currently being tested in hospital laboratories.

Together with Smith, Graham is currently deeply involved in plans to form a spin-out company to commercialise the research and take advantage of what he describes as ’our strong intellectual property rights position and patent portfolio.’

Centre for Molecular Nanometrology at the University of Strathclyde

Another major focus of Graham’s attention is the recently established centre for molecular nanometrology, set up as a collaboration with David Birch (head of physics at Strathclyde) between chemistry and physics researchers at Strathclyde. Graham explains: ’We established this together because we felt there was a lot of synergy between our work in chemistry and physics and there wasn’t really any mechanism for exploiting that synergy.’

The Strathclyde team interprets molecular nanometrology as referring to measurement of systems on a nanoscale, and sees this as a key area for the future of measurement techniques, especially in medical diagnostics, but not exclusively so. To support the centre, they have been selected to receive a substantial science and innovation award from the EPSRC, although the exact amount has not been finalised.

Graham also emphasises that the recent increase in his group’s activities has been well supported by the RSC’s analytical chemistry trust fund, commenting: ’Their support has been a major factor, allowing us to have so many things going on at once.’

When asked to return to his hopes for the next 10 or 20 years, but setting aside his dreams for the Scotland rugby team, Graham is happy to try to envisage the far future: ’I hope that within 10 to 20 years our work will have led to intelligent recognition chemistry that works in living systems, that responds in a way that we want it to, and gives back meaningful messages. By living systems, we mean initially living cells and living tissue, but ultimately we want to be able to point equipment against your skin and get a signal back. But that is a long way away for us.’

Andrew Scott is a writer and lecturer based in Perth, UK

The focal point of much of Duncan Graham’s research at the University of Strathclyde is the exploitation of surface enhanced resonance Raman scattering (SERRS) for bioanalysis.

The sensitivity of Raman spectroscopy is greatly increased when the spectroscopic target molecules are bound to the surface of metallic (silver or gold) nanoparticles, allowing detection of individual molecules. This very useful practical effect is due to the coupling of the plasmon band of the nanoparticles with the excitation frequency of the applied radiation, to enhance selectively specific vibrations of molecules adsorbed on the surface.

Graham and his collaborators have developed chemical techniques to attach DNA oligonucleotides to the metal surfaces of nanoparticles, especially silver surfaces, using benzotriazole groups and other functionalities. The oligonucleotides can be designed to bind to target nucleic acids of interest, and also to other biological molecules, including proteins. Recently, 40 picomoles of a specific DNA sequence was detected by a simple colorimetric change, and the sensitivity is expected to be improved further by incorporating suitable spectroscopic reporter molecules into the system.

This has the potential to allow detection and quantification of the binding at levels approaching those found in single cells. The ability to use DNA chemistry to detect proteins opens up possibilities for targeting a vast range of biomedically significant molecules and medical conditions.

Other work is focused on bonding molecules, such as antibodies, directly to the nanoparticles, opening up many more possibilities for sensor technologies.

’We are creating functionalised nanoparticles,’ summarises Graham, ’for which we can anticipate many uses. But in general, we make molecules that are designed to respond to different biological environments and we measure that response using our spectroscopy.’

Graham’s own research team concentrates on the synthesis of the required oligonucleotides and the spectroscopic dyes. For example, they have generated a large number of benzotriazole compounds with spectroscopically useful properties, including over 50 azo dyes.

Ewen Smith’s team concentrates more on the spectroscopic aspects and the physical characterisation of the nanoparticles.

Karen Faulds has been appointed as a lecturer in the area to expand the academic base and bring a more analytical bias to the research.

Together, the Strathclyde team is currently putting functionalised nanoparticles into living cells to see if the particles retain their spectroscopic sensitivity and can be used to get back useful information on the chemical content and biological state of the cells.

Specific practical targets for the research include sensors for the early detection of heart disease and assays for the rapid and simultaneous diagnosis of chlamydia and gonorrhoea.