Reinvesting in the future

Northern Ireland-based Almac is ploughing the profits from its pharmaceutical support divisions into a range of new research ventures. James Mitchell Crow visits the company

Northern Ireland-based Almac is ploughing the profits from its pharmaceutical support divisions into a range of new research ventures. James Mitchell Crow visits the company

Northern Ireland-based Almac isn’t your typical company. The firm provides support services to the pharmaceutical sector - nothing particularly unusual about that. Where Almac differs from its rivals is in its history and ownership - which directly influences the company’s strategic direction. 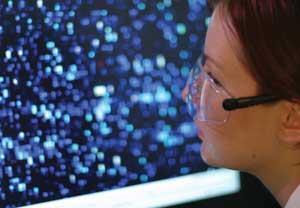 The company was created by Sir Allen McClay in 2001. McClay had set up his first Northern Ireland-based pharmaceutical company, Galen, in 1968 - eventually growing it into a ?1 billion firm. Following its 1997 initial public offering and listing on the London Nasdaq stock exchange, Galen purchased US speciality pharmaceutical firm Warner Chilcott in 2000. However, the resulting shift in company’s focus to the US market threatened the company’s Northern Ireland operations. In 2001, McClay retired from Galen Holdings and promptly bought back the company’s pharmaceutical services divisions, founding Almac.

And because Almac remains privately owned, all profits are reinvested into the business - which has seen the company create some new research arms that could significantly raise its profile. However, the firm’s foundations are its service divisions, which have become increasingly integrated since the Galen days, and offer everything - from compound synthesis and analysis to clinical logistics - to get an experimental drug through Phase I development.The company call this integrated service ’rapidd’.

’There’s a couple of other companies trying to offer this integrated service, but our advantage is that we have all our divisions on one site, so we can talk to each other as we do the chemistry, all the formulation and analytical work, and then the clinical trial manufacturing, etc.’ says Stephen Barr, who heads up Almac Sciences, the company’s chemistry arm, as well as new research division Almac Discovery. ’This service is something we’re just now launching onto the marketplace, and it’s definitely something that people want to hear, because we can significantly shorten the timescale. We’re trying to achieve all those activities in about a year - roughly half the current industry standard - which is a massive saving for a pharma company.’

And the support industry is becoming increasingly important to pharmaceutical firms, says consultant Daniel Hoffman, US-based director of Pharmaceutical Business Research Associates. ’The process of bringing new drugs to submission to the regulatory agencies is extremely important - the pharmaceutical services market is growing, and will grow even more as pharmaceutical companies try to outsource so much of their operations.’

According to industry analysts Datamonitor, the pharmaceutical contract research and clinical trial service market was predicted to exceed $35 billion (?25 billion) in 2008, and continues to grow at over 15 per cent per year, as big - plus medium and little - pharma ups its outsourcing.

Almac is certainly enjoying rapid growth. The company’s workforce at its Craigavon headquarters grew by 15 per cent during 2008, and now stands at over 1500 people. Meanwhile, the company is also expanding its US operations - building a new North American base at Lansdale, Pennsylvania - and its global workforce is now close to 2500.

However, competition is stiff, and continues to grow - particularly from companies in countries with a lower cost base, such as India and China. ’These companies can benefit from lower costs of hiring research personnel, the less complex recruitment of patients, and so forth,’ says Hoffman. However, predicting the timing and scale of that impact is complicated by current global economic conditions, he adds. ’It may be that the competitive threat from some of these emerging company sources has been postponed for a few years - but longer term, you will have an entry from these emerging markets into all aspects of healthcare, but when that will be, and the nature of that threat, is very much open to question.’ 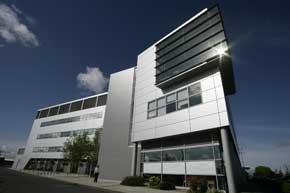 Barr says the company is already adapting to increasingly global competition. ’It’s fair to say there are elements of our business that are coming under pressure from low cost economies in China and India. There probably are parts of the business that we have already lost to low-cost economies - like basic chemistry services which are very easily attainable at the low cost base.

’We’re trying to ensure that we keep ahead of those businesses from an intellectual perspective, and offer a more value-added service through solutions provision rather than just service provision. There will continue to be competition from all parts of the world, and we just have to be able to respond to that and offer something better than the competition are.’

Building on its service business, the company has more recently moved into research, launched two new divisions - Diagnostics and Discovery. ’We have a successful service-based business in Almac group, and like all service businesses it can gain you a certain amount of return, based on your revenue stream,’ says Barr. ’With that firm base, we felt there was also the opportunity - and the skill set - to allow us to look, in a small way, at a higher risk, but higher return, initiative. This led the company to think about these other activities.’

The first of these research divisions to be set up was the diagnostics arm, which looks to tap into the area of personalised medicine - an area in its infancy, but with vast potential.

’The focus for the diagnostics division is really biomarker discovery and validation,’ says Paul Harkin, who heads the division. These biomarkers are discovered principally using microarray technology, he adds. For example, Almac is working with pharmaceutical companies to develop companion tests for their drugs, so that individual patients can be tested to assess whether they would respond to these drugs or not. 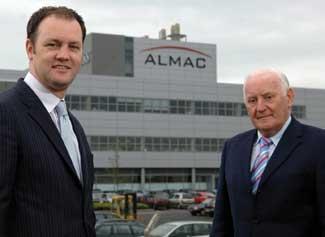 The company has initially focused on oncology biomarkers, although potential collaborations could see the tests being developed for inflammatory diseases. However, the company is also in the process of developing its own tests to assess cancer patient’s prognosis.

Almac has developed ’disease-specific array technology’ (DSAs) as the tool that underpins its diagnostic and biomarker discovery programs. DSAs represent the first high density disease-specific microarrays, the company claims. ’Each array contains somewhere in the region of 60,000 transcripts that we have identified as being expressed in those tumour tissues,’ says Harkin. ’We go through a large sequencing-based approach to define what’s expressed in those individual disease areas, and we then design probes to detect the individual transcripts, and these arrays are manufactured for us by [US-microarray based technology firm] Affymetrix.’ Using this approach has meant Almac’s DSAs contain tens of thousands of transcripts not available in current generic platforms, says Harkin. 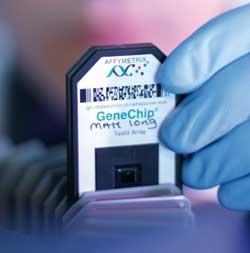 Drug target discovery on a chip

’The important thing about the technology is that it’s designed to work optimally from paraffin-embedded tumour tissue, which is how most tumour material is preserved, but which has traditionally not been amenable to large-scale gene exprssion-type strategies because RNA is partially degraded. Our technology allows us to obtain robust data from that material.’ This means the company can use the large existing libraries of clinical tumour samples to develop and validate their arrays - which they have already developed for breast, prostate, lung, ovarian and colorectal cancer.

One application stemming from the DSA approach is a test developed to detect patients likely to relapse following surgery for early stage colon cancer. Approximately 80 per cent of patients will be cured of the disease by surgery alone - but 20 per cent will relapse, and currently there is no way to identify those patients to treat them with chemotherapy. Almac’s test can predict those patients who will not relapse with 92 per cent accuracy. ’We should be submitting that test for approval with the US Food and Drug Administration around December 2009,’ says Harkin. The company is already in discussions with a number of potential multinational partners who would commercialise the tests, bringing them to market worldwide.

With the microarray technology in place - and a division dedicated to chemical synthesis - the next obvious step was a move into drug discovery, says Harkin. ’When we began to think about the benefits that biomarkers can bring to overall drug development pipeline, we began to see the synergies between diagnostics and chemistry, and how we could bring the expertise together to initiate a new drug discovery initiative.

’What diagnostics will add into that will be an ability to identify novel targets, but in parallel to identifying targets, to identify biomarkers that may be useful in the further development of those targets,’ Harkin adds.

The company isn’t looking to take on the likes of drug giants such as Pfizer and GSK - initially at least - but is looking to in-licence promising academic oncology programmes, and take them through Phase I clinical proof-of-concept trials, before licensing the programme on.

’We’re focussing initially on oncology, because we have the oncology base here - we have the proprietary diagnostics platforms available to us, and we can also make use of the wider cancer infrastructure within Northern Ireland, where they’ve established a quite significant cancer centre in Belfast, and there’s nice research collaboration opportunities within that centre that we’re also utilising.’ 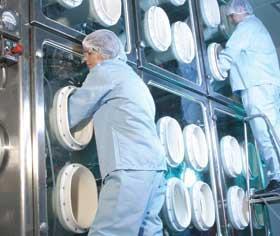 The discovery division was launched in June 2008, and is already working on several projects. ’We’re trying to balance the discovery portfolio between higher and lower risk opportunities,’ says Barr. ’At the higher risk end we have the target identification strategies coming out of Almac Diagnostics - although the approach that we take, we feel, is quite novel, and will allow us to minimise some of the risk going forward. But additionally we have licensed in a couple of slightly more advanced projects from academia where the target is known, and we’re right now identifying the initial hits against those targets.

’These initiatives, at the moment, are a very small part of the business - in terms of investment, and numbers of people, it’s way less than 10 per cent of the group,’ adds Barr. ’But our belief is that, if we get some of these things right with the diagnostics and drug discovery, you can imagine the returns that those could bring would outweigh the service revenues. We’re nowhere near that yet, but we hope that in the next three to five years, we might see some returns.’