The expanding world of microarrays

Microarrays have come a long way in their short lifetime and are indispensable components of the life science research toolkit. They are used in wide-ranging applications including cancer research and new variants such as protein and transfected cell microarrays give them a very rosy future.

In 1975 two fundamental ideas laid the foundations for microarrays. One was the step from traditional to 2D electrophoresis, pioneered by cell biologist Patrick O’Farrell from the University of California at San Francisco, US. This allowed researchers for the first time to visualise the entire protein production of a given cell as a multitude of black spots, separated according to the protein size and charge. 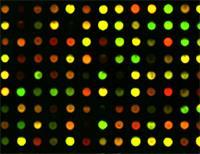 From the rapidly expanding field of 2D electrophoresis it became clear that analysing the gene expression of a cell also needs two dimensions and quantitative analysis of the signals spread out on the gel or array. The electrophoresis technique has become an important tool for proteomics research because the spots contain enough material to be identified by modern sequencing methods.

The other 1975 breakthrough was the Southern blot, named after Ed Southern, then at the University of Edinburgh, UK. He transferred DNA from a separation gel onto a membrane, which immobilised nucleic acid molecules as separated spots that could be probed with complementary labelled DNA or RNA strands.

Putting DNA on the spot

In the 1990s, the DNA microarray brought together the 2D visualisation of gene expression and the hybridisation of target nucleic acids with immobilised oligonucleotide probes.

This then led to a wide variety of tools including RNA arrays, small molecule arrays, and protein arrays. The most recent addition to the set inserts (transfects) foreign DNA into living cells - a transfected cell array. This could help drug companies to identify drug-target interactions.

DNA, with its remarkable stability and string-like structure, remains the most straightforward molecule to put into arrays. The basic concept behind a DNA microarray, or chip, is fairly simple. A support, typically glass or polymer, holds a series of spots, each of which contains single-stranded DNA that is complementary to the gene to be probed (or a fragment of this gene).

Analysing gene expression is a huge commercial area for DNA chips. The messenger RNA (mRNA) is extracted from the cells being studied, converted to single-stranded complementary DNA and then exposed to oligonucleotide probes on the gene chip. If the organism expresses a particular gene, the complementary DNA will hybridise with the corresponding spot on the microarray. Fluorescent labelling is commonly used to detect the extent of hybridisation and can be monitored using a scanner.

There are two fundamentally different ways of making a DNA chip.

The DNA sequences can be synthesised on the spot using different micro masks to allow each nucleotide to react with a specific subset of the growing DNA molecules. This method can produce reliable results for oligonucleotides of up to 25 bases.

Alternatively, the DNA strands can be synthesised separately and applied to the chip using photolithography, robotic devices known as spotters, or adapted inkjet printers. This is the method of choice for longer strands typically comprising 50 or more nucleotides. However, the resulting arrays have a lower information density than those produced in situ.

A number of companies have exploited the in situ synthesis method by offering ready-made DNA chips for specific applications such as gene expression studies.

However, the usefulness of such off-the-shelf solutions was cast into doubt in 2003, when Margaret Cam, director of the genomics core laboratory, National Institutes of Health, Maryland, US, conducted a comparative study using three different brands of arrays. Her research group observed spectacular differences between the results with arrays from different makers.

Cam’s work led some researchers to rethink the standardisation, use, and data interpretation in connection with short oligonucleotide arrays. Those who successfully use commercial DNA arrays often think hard about the underlying biology and then look for a characteristic pattern of responses, without laying too much trust on the presence or absence of specific signals representing individual genes.

Although some research papers have come to more optimistic conclusions on the comparability of different platforms, Cam remains unconvinced: ’These papers utilise filtering strategies which remove noisy and/or low-level data that tend to improve correlations somewhat. These types of filtering also tend to remove genes that are detected in one platform and not in another, which would count otherwise as a discordant call.’ She concludes: ’I’m not sure that we’ve seen a satisfactory end to this story as yet.’

The alternative method, which applies larger DNA strands spot by spot, is more troublesome but allows the researcher more control of the specific results for individual genes. This approach is also suitable for systematic high-throughput work such as studies of medically relevant gene expression patterns.

While the widespread use of both commercial and homemade DNA arrays might suggest that the technology has reached maturity, new methods are still emerging.

The DNA chains to be extended in a given step are deblocked by an acid produced electrochemically in situ by an array of small electrodes.They found that the technique can rapidly produce oligomers of up to 17 nucleotides with a high degree of accuracy.

Cancer is a major field where such methods could revolutionise diagnostics and the search for new therapies. Ricardo Brentani’s group at the Ludwig Institute for Cancer Research in S?o Paulo, Brazil, has already built a library of more than one million cDNA (DNA transcripts of messenger RNAs) clones to be used to print customised DNA arrays. Using these chips, the researchers are developing profiles for certain types of cancer diagnoses, which could one day be used in routine checkups following cancer treatment. 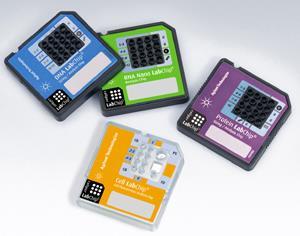 Researchers frequently use microarrays to study how DNA interacts with other nucleic acids or proteins. In 2001, Junaid Ziauddin and David Sabatini, working at the Whitehead Institute in Cambridge, Massachusetts, US, went one step further and introduced the arrayed DNA into living cells.

They printed defined DNA spots on a glass slide, applied a lipid transfection reagent, and then added a mammalian cell culture that was known to stick to solid substrates. This resulted in a microarray of cells in which specific clusters were transfected with a specific DNA. The researchers used this to study the effect of genetic manipulation in a high-throughput fashion.

Ziauddin and Sabatini anticipated that their method could be used to overexpress specific genes, based on the localised transfection with specific cDNAs. However, the simultaneous development of RNAi methods, which allow researchers to switch off specific genes in a living cell by adding special RNA sequences known as siRNAs (short interfering RNA) or microRNAs, opened a second, possibly more important, range of applications for the cell array. Because a standard microscope slide can hold between 6000 and 10 000 cell clusters, five such slides would suffice to suppress or knock down each and every gene of the human genome individually and study the resulting effects in the living cell.

’The use of siRNAs to knock down expression of selected genes extends the usefulness of the transfected cell array significantly,’ comments Dominique Vanhecke from the Max Planck Institute for Molecular Genetics in Berlin, Germany.

It’s not just the high-throughput performance that gets researchers excited. Silencing and overexpression can also be combined. Vanhecke explains: ’Cell arrays have enough spotting capacity to test combinations between hundreds of different siRNAs in a single experiment, a procedure we call multiplexing.’

This opens up the possibility of screening for so-called synthetic lethal interactions, which occur when two non-lethal mutations act together and result in cell death. Such combinatorial screening methods can also help to identify new drug targets.

With the vast amount of genomic material to be tested in high-throughput experiments, the cost factor of every single piece of information is becoming an important aspect. Vanhecke concludes that ’cell arrays are the most cost-effective functional genomics tool available at the moment’.

For high-throughput proteomic studies monitoring protein-protein and protein-small molecule interactions, it would be highly desirable to have protein arrays exactly analogous to the established DNA arrays.

While the linear structure of DNA lends itself to be stacked in parallel bundles on top of a flat surface, globular proteins present the added difficulty of their intrinsic 3D structure and dynamics. Immobilising proteins on a solid surface while retaining their structure and function is possible in principle, but tricky in practice. Hence, doing the same for hundreds of different proteins with the efficiency required for high-throughput applications remains a challenge.

A well-known exception to this rule is the highly successful Elisa (enzyme linked immunosorbent assay) technology, where the fact that antibodies are highly diverse in some parts, but identical in others has facilitated the development of a protocol that fits a large variety of specificities.

Similarly, developing protein arrays is easier when the proteins in question have at least one structural feature in common, as has been demonstrated in studies of p53 mutants, and of G-protein coupled receptors.

Only recently have array studies covering a large and diverse set of proteins, such as the yeast proteome, been reported. Michael Snyder’s group at Yale University, US, used a proteome chip containing 6500 protein preparations of 5800 different yeast proteins to search for as yet unidentified DNA-binding proteins.

The study identified more than 200 DNA-binding proteins, nearly half of which had no previous record of proven interactions with DNA. In particular, the researchers went on to show that the metabolic enzyme Arg5,6 binds DNA and plays a role in controlling gene expression.

Soon afterwards, Stuart Schreiber’s group at Harvard University, US, in collaboration with Snyder, reported a study of the target proteins of a promising anti-cancer agent rapamycin conducted with a similar proteome chip. In an innovative approach combining the advantages of DNA and protein arrays, Gyoo Jung and Gregory Stephanopoulos from the Massachusetts Institute of Technology, US, have recreated multienzyme pathways on chips by immobilising various mixtures of the required enzymes.

As these researchers have demonstrated with a two-step enzymatic process and with the five-step enzymatic synthesis of trehalose, the as yet elusive local organisation of such enzyme pathways can be reproduced on a chip and tested experimentally. This work relies on specific RNA-protein fusions, which can be created by crosslinking a nascent protein to its own messenger RNA during protein biosynthesis in a cell-free extract.

The availability of these constructs allowed the researchers to use an ordinary DNA chip as the foundation for their protein experiments. By simply spotting fractions of the genes coding for each enzyme onto the array, then allowing the mRNA end of the construct to hybridise with the immobilised DNA, they can transform a DNA chip into a protein chip.

Reviewing recent work on protein arrays, Paul Predki from the company Invitrogen in Connecticut, US, concludes that the ’literature continues to support the idea that immobilised proteins can maintain their proper function’. Nevertheless, protein arrays still have a long way to go before they will be taken up in the same way as DNA arrays.

DNA arrays have been around for about a decade, and the words high-throughput screening have been buzzing around science circles for just as long. However, it would appear that only now do researchers have access to a broad range of second generation applications of DNA arrays that allow them to build on the essential technology and take the power of immobilised DNA into the realm of proteins and cells. This enables them to conduct high-throughput studies of genome function as close as possible to the natural environment in which genes and their products work.

So, for those who want to study functional genomics with high-throughput methods, the fun has just begun.

Michael Gross is a science writer based in Oxford, UK.