The house that BASF built

Chemistry is the secret ingredient behind an energy-efficient house that has been built in Nottingham, UK

Chemistry is the secret ingredient behind an energy-efficient house that has been built in Nottingham, UK

The ’BASF House’, opened on 30 January 2008, is an experiment in building and running a low-energy, low-cost house that has a relatively low environmental impact.

The compact three-bedroom house has also been designed to meet the UK’s need for new homes that are affordable for the first-time buyer. In an estate of 20 homes, BASF estimate that it would cost about ?70,000 to build each house. And although this first example is a concept house, all of the materials used to construct the building are currently available on the market.

Built by BASF as a showcase for the energy-saving innovations produced in the company’s construction chemicals department, the house forms part of the Creative Energy Homes project, a collaboration between industry and the University of Nottingham’s School of Built Environment. Six houses will eventually be built on the site, each to fulfil a slightly different role. For example, the house to be built by energy company E.ON will replicate a 1930s structure - typical of much current UK housing stock - before being retro-fitted with insulation technologies to demonstrate how current housing can be upgraded to meet modern energy efficiency standards.

A
The ground floor walls are made from highly insulating foam blocks, which rapidly slot together like Lego - the lower floor took just three days to complete. The walls are built in two layers, and the cavity between them filled with a low-density concrete that incorporates up to 30 per cent air. The foam blocks are made from BASF’s Neopore foam, a polystyrene that traps an insulating layer of air, but which also incorporates microscopic flakes of graphite to reflect heat escaping from the house back inside.

B
The house collects as much of its energy as possible directly from the sun, through active and passive solar heating. Solar collectors on the roof are designed to provide 80 per cent of the house’s hot water needs. And the entire south face of the house consists of a double wall of glass, designed to trap heat like a greenhouse. Once the enclosed air reaches a certain temperature, windows on the inner wall open automatically, letting the warmed air heat the house. 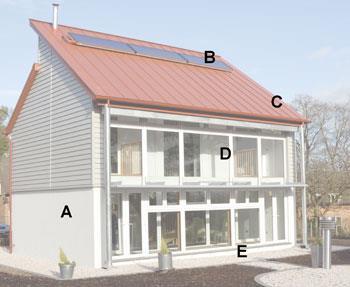 C
Despite being a sun-trap in the winter, the house also minimises unwanted heat build-up in the summer. The roof of the building is coated with a ’terracotta’ pigment, which absorbs visible light like a standard red paint, but which has minimal absorption in the infrared region of the spectrum, thus reflecting most of the sun’s heat. This heat-reflective layer is built onto sandwiched panels of Elastopore, a highly insulating closed-cell polyurethane rigid foam which is also used for the first-floor walls.

D
The inner walls are made from special plasterboard that acts as passive air-conditioning, preventing the house from becoming too hot during the summer while keeping it toasty during cold winter nights. The board contains micrometer-sized spheres of paraffin wax, permanently encased in an acrylic polymer shell. The wax is designed to melt above 23?C, absorbing excess heat from the room as it does so. During the night - once the room cools below the melt temperature - the wax re-solidifies, releasing the energy back into the room.

E
The sun can meet many of the building’s heating and hot water needs, but the house also sports a biomass boiler which runs on locally-sourced fuel pellets, made from the waste matter of oil seed rape plants (although other fuels can also be used). The heating forms part of a ventilation system that uses underground heat-exchanger pipes to provide the building with fresh air. Since the ground has a year-round temperature of about 10?C, the heat-exchanger ensures air entering the house is efficiently pre-cooled in summer, and pre-warmed in the winter.

The BASF house is expected to use less than 15 kWh/m2 of energy per year, compared with the average house in the UK which currently uses over 200 kWh/m2 per year, says Claire Farrar, who led the BASF House project. The house is intended as a stride towards the UK government’s ambitious plans that all new houses built after 2016 be ’zero carbon’ - that is, any small amount of energy the house has to take from the national grid is offset by energy generated on-site. ’The BASF House is a very significant step towards the government’s goal,’ said Brian Ford, head of the School of Built Environment at Nottingham.

The urgency of these developments is clear. ’The UK government’s zero carbon plans are probably the most stringent and ambitious of any country in the world,’ Mark Gillot, Co-Director of the Institute of Sustainable Energy Technology at the University of Nottingham, told Chemistry World. ’Yet Germany and Scandinavia are currently ahead of the game. If the UK is to achieve its zero carbon aims, it will not only have to overtake these countries, but exceed them by a long way.’