For years scientists have tried and failed to artificially reproduce the properties of spider silk. Michael Gross untangles the latest strands of research

For years scientists have tried and failed to artificially reproduce the properties of spider silk. Michael Gross untangles the latest strands of research 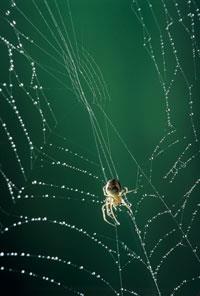 Natural silks, as produced by spiders and many kinds of insects, achieve surprising material properties, optimised for their biological functions. Yet the animals produce these fibres under very benign conditions - ambient temperature, low pressure, and aqueous solution. No wonder that materials scientists would like to copy their blueprint.

Spiders’ dragline silk, which they use for the frames of their webs and for abseiling from branches and ceilings, is a particularly coveted prize for biomimetic material development. It beats both steel and Kevlar on a strength per weight basis, and promises of man-made spider silk have made headlines on numerous occasions. Researchers have cloned gene constructs into all kinds of creatures, harvested the proteins, and spun them into some kind of thread. They also have taken spiders webs apart, dissolved the proteins, and tried to reconstitute the fibres from them. Yet the results have mostly been disappointing. ’They shouldn’t call it silk,’ says David Porter, a polymer scientist at the University of Oxford, UK. ’It’s essentially just another kind of nylon. The factor that makes silk such a special material is still missing.’

Over the last few years, Porter has collaborated with spider expert Fritz Vollrath at Oxford’s zoology department to apply the experimental methods and theoretical models of polymer science to the hard problems that biologists face in their attempts to understand spider silk. The hope is that, once the origins of silk as a polymer are understood in detail, this knowledge will help to design and produce new polymers with unprecedented and commercially valuable properties in return.

The power of rheology 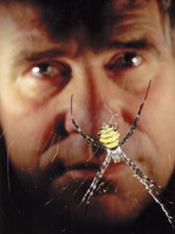 Scientists like Fritz Vollrath have wrestled with spider silk for years

One of the key experimental methods of polymer research that the Oxford team are using is rheology, a commonly used technique in polymer science which analyses the viscosity and elasticity of a medium during flow and deformation. It is particularly useful for characterising materials that fall somewhere between the typical behaviour of liquids and that of solids, like molten polymers.

The way a material deforms when shear forces are applied to it at different rates and over different timescales can reveal how the molecules inside it are reacting to the forces. Rheology experiments can also determine how much energy the material can store (known as its elastic modulus, G’) and how much energy it loses to friction (its viscous modulus, G").

The team can now apply this method to the protein-rich liquid from which spiders spin their silk, known as the silk dope. ’The rheology of silk has been investigated in only a handful of studies over the last 50 years,’ says Chris Holland, who uses the technique in Vollrath’s lab. ’Sample size was the limiting factor, as traditional rheometers required millilitre samples, while spiders and silkworms store only microlitres of fresh silk dope,’ Holland explains. Part of the problem is that spiders are fiercely territorial with a tendency towards cannibalism, which rules out the option of farming them in large numbers. Therefore, earlier studies used either diluted silk dope or ’reconstituted’ material made by dissolving silk fibres.

Using more modern instruments which have just become available, Holland has studied the rheology of natural silk dopes directly extracted from the silk-producing glands of both spiders and insects. Analysing their viscosity and flow profiles, the Oxford researchers found that spider and silk worm materials have very similar properties.1 ’This result was very surprising,’ Vollrath says, ’because the silks of spiders and insects evolved independently for over 400 million years.’ 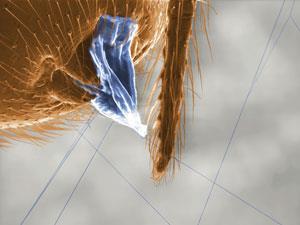 Carrying out the same kind of analysis on the kind of deconstructed material that researchers use to ’reconstitute’ silk, Holland and his team found that the rheological parameters differed by up to five orders of magnitude.2 In terms of the biological function of the material, this means that the ’unnatural’ protein solution has lost the ability to store kinetic energy from the fibre-pulling process and convert it into chemical energy in the form of the hydrogen bonding networks that make silk fibres strong.

Both spider and silkworm dope - but not the reconstituted material - behave essentially like molten polymers. For instance, they respond like liquids to slowly applied forces, but like solids to fast ones. This is good news, as it means the researchers can apply established theoretical models developed for the study of synthetic polymers to the biological materials.

Spiders do not only produce the very strong dragline silk. In fact, they can secrete different types of silk optimised for different purposes. Typical web-building spiders have seven types of silk glands, each of them producing a different type of silk dope. In the absence of detailed structural information, these silks can be characterised by their amino acid composition. Dragline silk, which is the best studied, has a very uneven amino acid composition dominated by glycine, alanine, and proline. However, the threads that spiders use for the spokes of their webs or to reinforce structural threads utilise the same amino acids minus the proline. 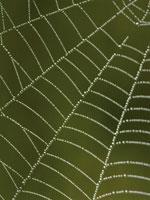 Silks are tailored to their function

One aspect that interests materials scientists is the stickiness of the spider web’s capture thread, which ensures that insects caught by it will not escape.

The sticky capture spiral thread is made of two kinds of silk - the fibre core is coated in a second kind of silk containing sugar-modified glycoproteins for extra stickiness. In addition, the coating secretion contains organic molecules like choline and taurine, and salts like potassium nitrate and monopotassium phosphate.

Other types of silk are produced for wrapping prey, covering the spider’s egg sac, and joining threads together.

To try and understand the role of the spinning process in dictating silk’s properties, researchers in Germany and Sweden have explored the role of charged amino acids during the switch from the highly soluble state of the proteins in the silk dope to the nearly water-free state in the finished dragline silk. They dissected the proteins, which are known as fibroins or spidroins, to analyse their structure. Although most of the length of a spidroin chain consists of highly repetitive patterns of only a few amino acids, the researchers paid particular attention to the structural units at either end of the polypeptide chain, i.e. the amino-terminal (N  -terminal) and the carboxy-terminal (C  -terminal) domains, each named after the chemical functional group that remains unbonded at each end of the chain.

The terminal (blue) parts of silk spidroin proteins hold the protein chains (green and yellow) apart in the silk stores in a ’clamp’ shape. In the spinneret, pH changes and shear forces cause the clamp to shut, letting the proteins assemble into fibres

All three studies converge on the view that a shift of pH from neutral (7.2) to slightly acidic (6.0) during spinning is responsible for the drastic shift in protein solubility. Scheibel concludes that during their storage at surprisingly high protein concentrations, the silk proteins are arranged as micelles, with the highly charged termini providing the water-soluble outer surface of the dissolved proteins.

The nursery web spider, black widow and the European garden spider - some of the species used in studies of spider silk

In the case of the black widow protein, the NMR work by Scheibel’s team showed that the domain forms dimers at the lower pH, suggesting a mechanism by which the protein molecules can be linked up in the silk fibre. ’A pair of C-terminal domains adopts an "open clamp" shape during storage of the solution, with two arms pointing in different directions,’ Scheibel explains. Holding the protein chains apart in this way prevents them from aggregating and solidifying into silk in the storage sac.

When the spider pulls the silk dope from its abdomen using either gravity or its hind legs, the material passes through the spinneret and the pH drops owing to the activity of proton pumps in the tissue lining the spinning duct. During that passage, both termini of the protein undergo structural change.

’The pH shift enables the clamp to close, allowing a precise alignment of the long molecular chains attached to each arm,’ says Scheibel. This, in combination with shear forces, which induce a laminar flow inside the spinning duct, produces the perfect molecular alignment of individual silk molecules. ’The pH shift also makes the other end of the chain - the N  -terminus - pair up with that of a neighbouring molecule, leading to an endless daisy chain of protein molecules.’

Researchers like Scheibel hope that with these and future insights into the properties of the silk dope and the fibre spinning mechanisms used by spiders and insects, they will in a few years be able to tailor silk-like materials for specific applications, particularly in medicine.

Historically, spider silk has been used as a peasants’ remedy in wound dressing, as it has antimicrobial activity and is dehydrating and biodegradable. Attempts to engineer medical applications from it have been less successful, however. ’Everyone’s talking about it, and there is a lot of people working on it’ says Vollrath, ’but nothing has been successful in human trials yet.’ 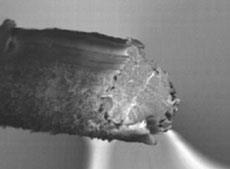 Source: © PROCEEDINGS OF THE NATIONAL ACADEMY OF SCIENCES, USA

One big stumbling block is the failure to reproduce authentic silk in the laboratory, but some other, non-silk materials may also be of interest for medical applications. Silk proteins can be made to aggregate in nanoscale spheres, which could serve as drug carriers, or as thin films for tissue engineering. Films from reconstituted silk proteins have already been shown to support growth of human cell lines.6

Sang Yup Lee’s group at the Korea Advanced Institute of Science and Technology at Daejeon, together with David Kaplan at Tufts University in Medford, US, has recently given the field new hope for closer equivalents to real spider silk. The researchers engineered Escherichia coli bacteria to produce the highly repetitive middle part of one of the proteins from Nephila clavipes  dragline silk, without the terminal domains. They succeeded in producing the repetitive peptide chain in various lengths close to the natural length (around 280kDa), which, says Vollrath, ’is a remarkable feat’.

Spinning this product from organic solvent, the researchers claim to have obtained fibres with mechanical properties that are comparable to natural dragline silk,7 although Vollrath and Porter remain unconvinced. Porter argues that the detailed profile of the mechanical properties reflect a completely different polymer chain structure, although their apparent ultimate strength has a similar numerical value. In any case, what’s still missing from the picture is a better understanding of how spiders produce the material from aqueous solution. For this, the terminal domains may well be crucial, as Scheibel contends.

David Kaplan agrees that there is still plenty of work to do. ’I think in the long term, using water to reproduce the self-assembly of silk proteins - incorporating all the critical domains from the native protein - will be key,’ Kaplan told Chemistry World. ’This will accomplish not only robust mechanical properties but also provide a much greener process. This is the direction of research we and other labs are pursing and with the advances from our own and other labs we are making excellent progress toward this goal.’

If and when researchers learn to master the spider’s skill to produce fibres optimised for specific purposes, such biomimetic materials are bound to become extremely useful in a range of applications in medicine and beyond.8,9

Michael Gross is a science writer based in Oxford, UK