Turning the tables on Alzheimer's

As our understanding of Alzheimer's disease develops, Clare Sansom takes a look at emerging strategies for treating this enigmatic illness

A little over a century ago, a middle-aged Austrian woman named Auguste Deter was admitted to a Frankfurt hospital with a combination of neurological and psychological symptoms that is now painfully familiar to millions of elderly people, their relatives and friends. 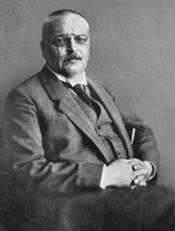 The senior physician who examined her, one Alois Alzheimer, made a detailed study of the case and, a year after her death in 1906, published a paper entitled A characteristic serious disease of the cerebral cortex.1 The specific neurological features described in that paper - fibrils with ’characteristic thickness and peculiar impregnability’ and ’small miliary foci’ - are clearly recognisable as the neurofibrillary tangles and amyloid plaques characteristic of the disease that now bears his name. Admittedly, the concept of progressive mental deterioration in the elderly had been recognised since antiquity, but Alzheimer’s account of a patient well outside the usual age range for the disorder was the first clear recognition of a syndrome with particular psychiatric and histopathological features.

By the turn of the 21st century, Alzheimer’s disease had become recognised worldwide as a critically important health problem. Alzheimer’s Disease International, the collective body of worldwide Alzheimer’s societies, stated in its annual report for 20102 that over 35 million people worldwide now suffer from dementia, or a progressive loss of cognitive function; Alzheimer’s disease is by far the commonest condition of this type. The total cost of caring for these people is estimated to be about $640 billion (?390 billion) - roughly equivalent to the gross domestic product (GDP) of Turkey or Indonesia.

Many of the molecular mechanisms involved in the progressive neurological changes that lead to Alzheimer’s disease have now been recognised. The widely accepted amyloid hypothesis focuses on the aggregation of a short peptide, beta-amyloid (A beta) around neurons in the brain as the dominant important event in disease pathogenesis. This results in neuronal death, and thus in the shrinkage of the cerebral cortex and cognitive defects that are characteristic of the disease. 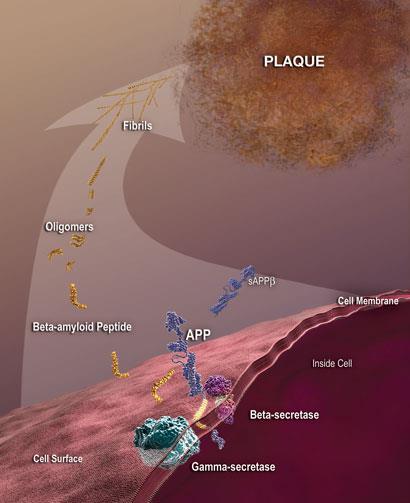 beta-amyloid is cleaved from the membrane-bound amyloid precursor protein (APP) by two proteases known as beta- and alpha-secretase; it has several forms, the most insoluble and most toxic of which is 42 amino acids long. This is the ’toxic’ APP cleavage pathway; in the ’normal’ pathway, alpha-secretase cleaves within the beta-amyloid region preventing its formation. ’There has been much debate over the last 20 years about the extent to which  beta-amyloid aggregation triggers Alzheimer’s disease and, therefore, how good a drug target this action should be’, says Dennis Selkoe of the Center for Neurologic Diseases at Harvard Medical School, Boston, US. ’But most people in the field now believe that amyloid aggregation is the key pathogenic process, and discussion focuses on the nature of the toxic species. There is evidence that soluble ’proto-fibrils’, small oligomers and even dimers of beta-amyloid are toxic, and that these surround and are in chemical equilibrium with the insoluble amyloid plaques.’

Despite enormous advances in understanding the mechanisms that lead to Alzheimer’s disease development, few drugs are available to treat the condition. What is more, all four anti-Alzheimer’s drugs in clinical use target symptoms, rather than molecular mechanisms. Three - Aricept (donepezil), Exelon (rivastigmine) and Reminyl (galantamine) - are inhibitors of the enzyme acetylcholinesterase; they increase the concentration of the neurotransmitter acetylcholine, which is depleted in the brains of Alzheimer’s patients. The fourth, Ebixa (memantine) blocks the action of another neurotransmitter, glutamate, which is overactive in Alzheimer’s patients causing further loss of neurons. 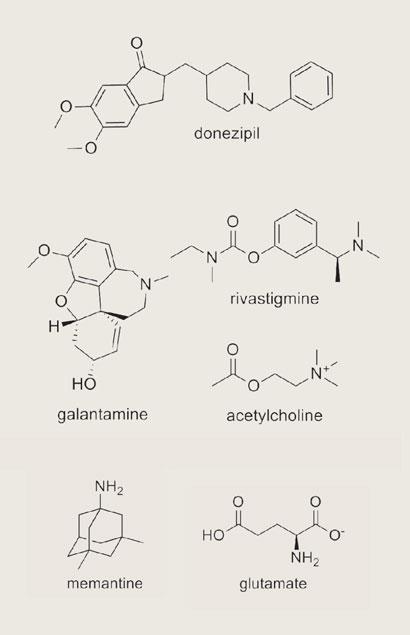 However, these drugs give at best only a temporary respite from the devastating symptoms of the disease. There is a pressing need for treatments that can permanently halt, or possibly even reverse the neurodegeneration triggered by

beta-amyloid aggregation. Research over the last 20 years has yielded numerous molecules that target the chemical mechanisms of the amyloid pathway, but none have yet passed through clinical trials. Alzheimer’s Disease International cites a relative lack of investment in research into the condition as one reason, with a 30-fold increase needed worldwide to give parity with cancer. This is a valid point, but Selkoe prefers to cite the difficulty in developing drugs that interfere with such a complex mechanism. ’We have had some disappointing trial results, but this does not mean that the amyloid pathway is an invalid target. It is more that it has not yet been fully tested.’

Current candidate drugs in clinical trials target Alzheimer’s disease via many mechanisms. Some of the most advanced are immunotherapeutic agents. Janssen Alzheimer Immunotherapy is collaborating with Pfizer in large international Phase III trials of bapineuzumab, a humanised monoclonal antibody that targets

beta-amyloid and removes it from the system, in patients with mild to moderate disease. ’These are currently the most advanced trials testing the amyloid hypothesis anywhere in the world’, says Selkoe.

Many of the most clinically and commercially successful drugs in use today target proteases. The proteases involved in the cleavage of beta-amyloid from APP, beta- and gamma-secretase, are therefore logical drug development targets. Neither, however, is without its problems. Gamma-secretase is a complex, multi-subunit protein that is also involved in processing the Notch protein. Notch is essential for embryonic development, but its function in adulthood is less well documented. However, the Notch pathway is known to be dysregulated in many diseases, including some cancers. ’Many potential gamma-secretase inhibitors  have failed in clinical trials, primarily due to inhibition of Notch processing,’ says Selkoe. Nevertheless, Kevin Gillman and his colleagues at Bristol-Myers Squibb in Wallingford, US, have developed a promising compound, BMS-708163, which has now reached Phase II clinical trials. that inhibits gamma-secretase almost 200 times as strongly as it does Notch processing. Beta-secretase is a less complex protein and potentially a cleaner drug target, but developers of gamma-secretase inhibitors have to contend with the need to produce a compound that both passes through the hydrophobic blood-brain barrier and binds to a hydrophilic protease active site.

Another mechanism currently attracting the attention of Alzheimer’s researchers and drug developers is the aggregation of  ?  -amyloid peptides to form oligomers and plaques. JoAnne McLaurin of the Centre for Research in Neurodegenerative Diseases at the University of Toronto, Canada, is studying a group of simple carbohydrates, the inositols or cyclohexanehexols, some of which have remarkable anti-aggregation properties. ’In 1998 we discovered that gamma-amyloid binds strongly to some lipids and that this promotes aggregation. We repeated the experiments using just the inositol head groups of those lipids, and found, to our surprise, a near opposite effect: the head groups promoted the formation of non-toxic, spherical micelles’, she explains. 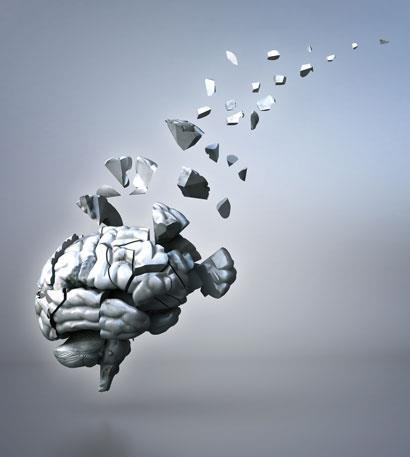 Out of the nine possible stereo-isomers of inositol, one - scyllo  -inositol - was found to be significantly more active than the others in vitro. ’We fed scyllo  -inositol to transgenic mice that carry mutations in the APP gene and develop cognitive defects reminiscent of Alzheimer’s disease, and found that it improved their behaviour, so we started clinical trials,’ adds McLaurin. Phase I trials revealed no significant toxicity, and a Phase II trial in partnership with Irish firm ?lan Pharmaceuticals is expected to report results later this year. Another particularly interesting line of work is that pursued by Diego Mu?oz-Torrero from the University of Barcelona, Spain: the development of multi-target molecules in which huprines are linked to a donepezil-related structural motif, and which inhibit amyloid aggregation, beta-secretase and acetylcholinesterase.3

These are only a few promising examples of the disparate molecules and targets under consideration in drug development for Alzheimer’s disease. What their developers all agree on, however, is that most, if not all, drugs for this condition will work better the earlier they are given in the course of the disease. Any drug acting on the amyloid pathway, whatever its mechanism of action, will halt neural degeneration much more readily than reverse it.

A condition known as mild cognitive impairment (MCI) is common in elderly people; a subset of patients with this condition deteriorate into full-blown Alzheimer’s cases, but others can remain stable for years and even decades. The ideal situation would be for targeted Alzheimer’s therapies to be made available to the subset of MCI patients with ’progressive’ disease, but these patients are clinically identical to those with the stable condition. Given the enormous number of elderly people with MCI and the likely expense of any targeted Alzheimer’s therapies, much research effort is being devoted to identifying specific biomarkers of early, preferably pre-clinical, disease.

Gabriel Vargas leads a group at Hoffman-La Roche in Basel, Switzerland, which is developing biomarkers for early diagnosis of Alzheimer’s disease using both imaging and cerebro-spinal fluid (CSF) analysis. Imaging biomarkers are radiolabelled compounds that bind to amyloid deposits and can be seen on positron emission tomography (PET) scans. The CSF of Alzheimer’s patients contains higher than average concentrations of the t -protein, the major component of neurofibrillary tangles, and, interestingly, lower than average concentrations of beta-amyloid. ’Everyone produces a little of the toxic, beta-amyloid peptide’, says Vargas. ’In Alzheimer’s disease patients, the A beta-42 peptide accumulates into aggregates and plaques, and so the concentration in CSF decreases.’ Both types of biomarker give positive results in patients at the very early stages of disease, and Vargas believes that within the next five years PET scanning and the ’low amyloid, high  t ’ CSF signature will enable a definite diagnosis to be made, ruling in or out pre-Alzheimer’s disease in MCI patients. ’The CSF analysis requires a lumbar puncture, which is both invasive and expensive,’ he adds. ’Biomarkers in blood or serum would represent a great improvement, and we and other groups are actively working on developing these.’

A group based at the Behavioural and Clinical Neuroscience Institute, University of Cambridge, UK, is taking a completely different approach to biomarkers of Alzheimer’s development. Barbara Sahakian and her colleagues have derived ’behavioural biomarkers’ that give clear distinctions between Alzheimer’s patients on one hand and elderly patients with depression (who often perform poorly in cognitive tests) and age-matched controls on the other. MCI patients are stratified, with those at most risk of disease progression scoring most like the Alzheimer’s patients and those with stable disease more like the controls. These tests involve remembering associations between pictures and locations on a screen. Lisa Saksida and colleagues, also in Cambridge, have developed an equivalent, and remarkably similar, touchscreen-based test for Alzheimer’s-prone transgenic mice, and is working on specific tests to recognise defects in attention, which is one of the first cognitive processes to be affected. ’Because the cognitive assays are so similar, this technology may provide a critical translational bridge between human patients and the animal models used to develop treatments’ says Saksida.

With Alzheimer’s disease and other related dementias already costing about 1 per cent of world GDP, and the number of affected people predicted to more than triple by 2050, there is an enormous need for more effective treatments. Current research suggests that the ’window of opportunity’ for effective drug treatment will be lost once there is significant neuronal damage and cognitive loss. Combining drugs that halt the process of degeneration with non-invasive biomarkers that identify individuals at risk before that loss occurs seems to be the most promising approach.

Clare Sansom is a freelance science writer based in Cambridge, UK