Mike Sutton delves into the history of telescopes, spectroscopes and stellar chemistry

Mike Sutton delves into the history of telescopes, spectroscopes and stellar chemistry

Four hundred years on from Galileo’s first telescopic observations, 2009 is not only the International Year of Astronomy but is also an important anniversary for chemists. In 1859, Bunsen and Kirchhoff began their spectroscopic research, and soon afterwards chemists and astronomers successfully harnessed spectroscopes to telescopes. 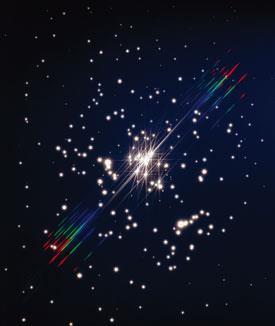 However, great discoveries seldom emerge from a single Eureka! moment and, while celebrating these anniversaries, we should remember that there were telescopes before Galileo, and spectroscopes before Bunsen and Kirchhoff.

Greek, Roman and Arabic scholars had noted the magnifying power of lenses, but it was only in the late 13th century that European artisans started making spectacles to improve defective vision. Rumours abounded about ’magical’ devices enabling people to see distant objects enlarged. They may have been true, for when someone with hyperopia - a form of long-sightedness - looks through a convex lens at a suitable distance it combines with the defective lens in their eye to act as a crude telescope.

Several 16th century authors, including Giovannibattista della Porta and Thomas Digges published descriptions of far-seeing devices, but as they never demonstrated them publicly we cannot be sure they really existed. However, it is certain that by 1608 several Dutch spectacle-makers were selling pairs of lenses in sliding tubes, later known as telescopes. Hans Lippershey claimed priority, but while wrangling over patents continued, the instruments were distributed (and copied) across Europe.

The English mathematician Thomas Hariot turned one on the moon in July 1609, but published no results. So it was Galileo Galilei who, in December 1609, made the first telescopic discoveries to be communicated to the scientific world. Galileo was professor of mathematics at Padua, Italy, but also a skilled craftsman who made his own instruments. Before seeing the Dutch devices, he deduced how they must work and constructed one himself. Several of the observations he described in The starry messenger   (1610) challenged astronomical orthodoxy. In particular, his discovery of satellites orbiting Jupiter revealed another centre of motion in the universe besides our own planet. (His interpretation of these observations got him into trouble later, but that’s another story.)

Galileo and his successors produced increasingly powerful instruments, but found that high magnification telescopes suffered from chromatic aberration - blurred images caused by the differing refractivity of differently coloured light. Among those who confronted this defect was Isaac Newton. In the mid-1660s he used a glass prism to throw a rainbow-like spectrum on his wall, and pondered on ’the celebrated phaenomena of colours’. Then he sidestepped chromatic aberration in lenses by constructing the first practical reflecting telescope in 1668. 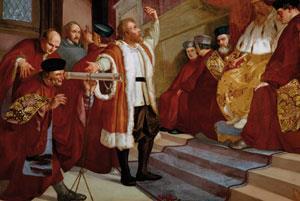 Galileo was the first to publish discoveries made using a telescope

A letter on optics in 1672 was Newton’s earliest scientific communication to the UK Royal Society. It provoked a bitter dispute with Robert Hooke, causing Newton to abandon the subject for years. However, when his optical investigations were eventually published in 1704, they encouraged other observers to study the prismatic spectrum more closely. (Meanwhile, 18th century telescope-makers experimented with compound lenses made of two different kinds of glass, which reduced the effect of chromatic aberration.) 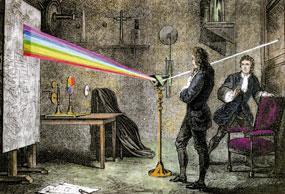 In 1752 Thomas Melvill, a recent graduate of University of Glasgow, UK, used a prism to disperse light from an alcohol flame to which salt had been added. He noted that the flame’s bright yellow colour was concentrated at one spot in the spectrum. However, no-one followed up his investigations for 50 years. William Wollaston repeated Newton’s experiment in 1802, passing sunlight through a vertical slit on to a prism. He saw seven dark vertical lines in the resulting spectrum, and suggested they might be natural boundaries between colours. He also found five bright bands in the spectrum of a candle flame, but did not pursue the enquiry further.

The crucial breakthrough came from Josef von Fraunhofer, a German technologist who made Europe’s best optical glass. By 1817 he had mapped hundreds of dark lines in the solar spectrum, and found many bright lines in the spectra of flames and electric sparks. Using a narrower slit, Fraunhofer then showed that the bright yellow line present in almost all flame spectra was a doublet, having exactly the same refractive index as a pair of dark lines in the sun’s spectrum. Replacing his prism with a diffraction grating enabled him to measure their wavelengths, and use them for calibrating instruments.

Precision instruments were Fraunhofer’s primary concern. He offered no theoretical explanation for these phenomena, but hoped that ’skilful natural philosophers’ would investigate them. Three who did so were David Brewster, John Herschel, and William Fox Talbot. Like Fraunhofer, Herschel and Brewster had struggled with chromatic aberration. Seeking a reliable source of monochromatic light, both had viewed flames through prisms and seen coloured lines.

Herschel noted the changed patterns produced by adding different substances to the flame, but did not suggest their use in chemical analysis; his friend Talbot proposed that in 1826.

Over the next three decades, several investigators attempted to explain the origin of the lines and to apply them in chemical analysis. The explanations often started from acoustic analogies - observers tried to ascertain the ’fundamental note’ of a particular spectrum and relate the frequencies of other lines to it in harmonic ratios. But Herschel and George Stokes were among those who asserted that the complex patterns of bright lines in the emission spectra of elements could not be generated by the vibrations of simple spherical atoms. (The same was true of the absorption lines observed by Brewster and others when sunlight or limelight was passed through gases.) All these observations supported the widely held suspicion that chemical atoms were really aggregations of more fundamental particles.

Meanwhile, analytical spectroscopy remained stalled. Fraunhofer’s double yellow line appeared in the spectrum of almost every substance, and its cause - traces of sodium salts - remained unrecognised. The lack of a reliable colourless flame was another hindrance until 1855, when Robert Bunsen commissioned technicians at Heidelberg University, Germany, to develop the burner which still bears his name. 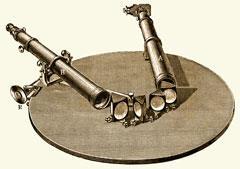 The spectroscope used by Bunsen and Kirchhoff

Soon afterwards William Swan in Edinburgh, UK, employed one to establish that the double yellow line appeared when as little as one part in 2.5 million of sodium contaminated the substance tested. Swan also introduced the collimator: a telescope eyepiece which rendered light rays striking the prism parallel, producing much sharper lines.

Bunsen used his burner to improve the flame test which Andreas Marggraf had introduced in the mid-18th century, but showed no interest in spectra until Heidelberg’s physics professor, Gustav Kirchhoff alerted him in 1859. Kirchhoff was not the first to recognise coincidences between bright emission lines and dark solar lines. However, in 1859, it was he who first proposed that every flame that generates bright emission lines will necessarily produce dark absorption lines of identical frequencies when white light from a brighter source passes through it. Fraunhofer’s dark solar lines must be produced by absorption in the sun’s outer layers.

Kirchhoff soon identified characteristic lines of sodium, potassium, magnesium, and iron in the solar spectrum, and Sweden’s Anders ?ngstr?m added more elements to the list by 1862. Meanwhile, Bunsen discovered two elements spectroscopically - caesium in 1860 and rubidium in 1861 - before isolating them in the laboratory.

More chemists acquired spectroscopes and found new elements with them, including thallium in 1861 and indium in 1864. Another element - named helium by its co-discoverer Norman Lockyer - was detected in the solar spectrum in 1868, 27 years before chemists identified it on Earth.

The astronomer William Huggins compared the arrival of the spectroscope to ’a spring of water in a dry and thirsty land’. However, the tiny points of light which interested him were tougher targets than the bright sources that previous investigators had tackled. Huggins therefore sought help from the chemist William Allen Miller, who had already done significant spectroscopic research. They began publishing the first reliable determinations of the chemical composition of stars in 1863, and in 1867 earned the Royal Astronomical Society’s gold medal for their work. A year later Huggins became the first astronomer to measure the velocity of a star relative to the Earth, using the Doppler effect. 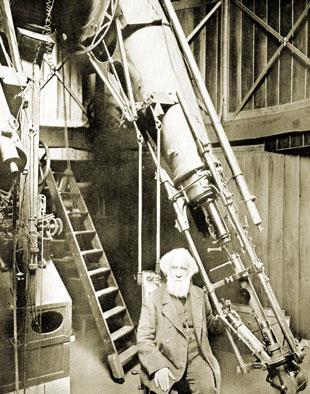 William Huggins in his observatory

This involved comparing specific lines in terrestrial and stellar spectra, and then measuring very small discrepancies between them. (If the star’s lines are shifted towards the red end of the spectrum, it’s moving away from us ; a shift to blue means it’s approaching.)

In the 1920s, Edwin Hubble employed this technique to measure the recession of distant galaxies, underpinning what later came to be called the ’big bang’ theory of the universe’s origin. But in the 1940s, the terrestrial big bangs produced by nuclear physicists encouraged astrophysicists like Fred Hoyle to investigate the creation of chemical elements by nuclear fusion inside stars.

Hydrogen was already known to be the primal element, fusing to give helium with vast emissions of energy, but the processes by which higher elements formed in stars were more complex.

In the 1950s, Hoyle and others demonstrated that elements heavier than iron were generated only in supernova explosions, after which some of the resulting cosmic debris became incorporated into planets. Hoyle famously concluded that ’we are all made of stardust’ - a thought which resurfaced a decade later in Joni Mitchell’s song about the Woodstock music festival (whose 40th anniversary was also celebrated this year).

Mike Sutton is a visiting fellow in the department of humanities, Northumbria University, UK