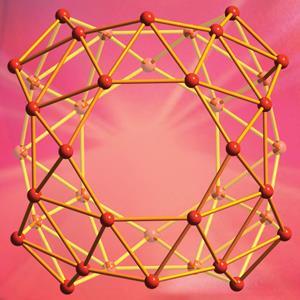 The first experimental evidence for a boron fullerene has been produced by researchers in the US and China.1 Unlike the football shaped C60 structure of buckminsterfullerene, the boron structure has very different symmetry, with a box-like shape containing both hexagonal and heptagonal holes. The researchers now hope that their findings will enable other boron fullerenes to be produced.

Boron cannot form a direct B60 analogue of buckminsterfullerene because it has only three electrons in its outer shell, so after forming three bonds it has no free electrons remaining to form the delocalised p-network essential to the stability of C60. In 2007, however, Boris Yakobson and colleagues at Rice University, US, proposed that this electron deficiency could be overcome by inserting an extra boron atom into the centre of each hexagon, forming B80.2 And in June, Chinese scientists calculated that a the boron fullerene B38 would be stable.3

The stability of these hollow-cage structures has subsequently been challenged, but now Lai-Sheng Wang at Brown University, US, and colleagues have used two different electronic structure algorithms to calculate the most stable possible structure of B40. Both programs indicate that, by a considerable margin, the most stable isomer is a distorted fullerene with a hexagonal hole on the top and bottom and four heptagonal holes around the waist. They have christened this structure borospherene.

The bonding network is highly complex and completely delocalised. The majority of the electrons are contained in three-centre, two-electron s-bonds, but there are also six-centre s-bonds and multi-centre p-bonds. The structure partly owes its stability to the very high energy gap between the highest occupied molecular orbital (HOMO) and the lowest unoccupied molecular orbital (LUMO), which, at 3.13eV, is larger than that of buckminsterfullerene. Unfortunately, it was not possible to directly test the chemical structure of neutral B40, so the researchers calculated the structure of the B40- ion. Here things get tricky: an electron added to B40 has to go into the high energy LUMO. The HOMO/LUMO band gap that had previously kept the fullerene structure stable now destabilises it, and a quasiplanar isomer now becomes slightly more stable. The difference, however, is marginal, so the researchers calculate that gaseous B40- should be a mixture of the two isomers.

The team then vaporised bulk boron with a laser and separated the molecular clusters using a mass spectrometer. They calculated the predicted photoelectron spectra of both quasiplanar and the fullerene B40- isomers and compared these with a measured spectrum of the B40- gas. The measured spectrum did not match either calculated spectrum, but it matched a combination of the two nicely. This suggests that, as predicted, the B40- ions were a mixture of quasiplanar and fullerene isomers. ‘If this interpretation is correct, we have observed the first boron fullerene,’ says Wang.

The team now wants to investigate the properties of their material further and ascertain whether other boron fullerenes exist. Although borospherene should be stable under vacuum, even at high temperatures, the electron deficiency of boron is likely to mean that, unlike buckminsterfullerene molecules, which are only attracted to each other weakly by van der Waals’ forces, it may be possible to join boron fullerenes into giant structures or add other molecules to the outside to functionalise them, although Wang emphasises that, at present ‘we don’t really know’.

Yakobson is intrigued, and looks forward to finding out whether B80 can be made and, if so, what its structure is. He discusses whether the researchers can truly be said to have observed the fullerene structure, given that their conclusions rest on a theoretical interpretation of spectroscopic data. ‘Altogether their argument seems convincing, but the word “observed” is maybe a little bit of a stretch,’ he says, ‘at least in the common sense of this word.’