10 out of 10 for boron's coordinated effort

A team in the US has created a boron compound that has the highest coordination number of any planar species, squeezing 10 spoke-like bonds from a central metal hub to 10 boron atoms equally spaced around a nanoscopic wheel.

Alexander Boldyrev and colleagues at Utah State University, Logan, working with Lai-Sheng Wang and colleagues at Brown University in Providence, Rhode Island, point out that to make such highly coordinated molecules in which there are equal distances between the central atom and all peripheral atoms is quite a feat of molecular engineering. It required the chemists to control both electronic and mechanical properties of the molecule.

Smaller wheel-like structures based with hexa- and hepta-coordinated carbon and peripheral boron atoms have already been constructed. These molecules fulfilled the electronic and mechanical needs of good bonding. 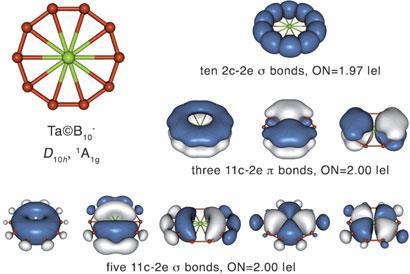 Chemical bonding pattern of Ta?B10- shown by the AdNDP analysis (ON stands for occupation number)

The team began with naked clusters of eight or nine boron atoms, which themselves are planar molecules. They point out that creating a flat 10 boron cluster with a nona-coordinated boron is impossible because boron atoms are simply too small.

Substituting carbon would not help because, being more electronegative than boron, carbon would eschew the central role. Transition metals, by contrast, are much more suited to playing this part. The Boldyrev and Wang team previously constructed a planar, nona-coordinated compound with a central ruthenium atom surrounded by nine boron atoms. They have now taken the concept still further to make deca-coordinated boron wheel.

Calculations suggested that any of a range of metals might act as the hub for a deca-coordinated boron wheel, but none of those modelled initially gave an energetic minimum and so would be unstable. However, the construction of the Ru?B9- ion suggested that 4d electron orbitals interacted with the B9 ring to stabilise this species. This hinted that an early 4d or 5d transition metal might be the best fit for a ’M?B10’ wheel.

The team has now successfully demonstrated that both niobium and tantalum fit the decagonal mould to give wheel-type anions. The team describes these species as closed-shell and doubly aromatic systems. The theoretical data fit the experimental photoelectron data obtained by the team and confirm that these first deca-coordinated chemical species are indeed two-dimensional.

’The deca-coordination of the metal atoms in these molecular wheel complexes pushes the boundaries of the maximum coordination number in planar species,’ Deborah Kays of the University of Nottingham, UK, tells Chemistry World. ’The design and characterisation of these species will tell us more about bonding and will certainly spur on the quest for even higher coordination numbers.’