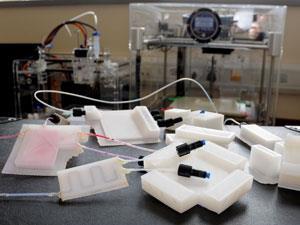 UK scientists have developed 3D printing technology for making miniaturised fluidic reactionware devices that can be used for chemical syntheses, in just a few hours.

Having recently built a 3D printer in his laboratory, Leroy Cronin and his colleagues from the University of Glasgow have now shown that intricate micro- and milli-scale reactionware can be printed. This technology offers scientists the freedom to design bespoke reactors using low cost materials, with a quick production turn-around. Initial design to a functional reactor is completed within a matter of hours and chemical reactions using the device can be completed in the same day.

‘The Cronin group's latest development of 3D printing techniques for the production of intricate micro- and milli-fluidic devices holds considerable promise for the synthesis of everything from simple organic compounds to metal nanoparticles,’ says Fraser Stoddart from Northwestern University in the US.

Using their miniature reactionware, Cronin and his team demonstrated the efficient synthesis of an amine by a two-step reduction amination, and subsequent alkylation of the resulting secondary amine. They also used the device to synthesise large polyoxometalate clusters, as well as the controlled synthesis of gold nanoparticles.

Stoddart says that ‘the technology will become widely used when it produces something that can only be made using this technology or the advantages of its use over other methods are overwhelming. Therein lies the challenge to the creativity that has come to characterise the Glasgow group's chemistry.’

Cronin believes that the scope for 3D-printed milli-devices is huge and the team is currently working towards expanding the versatility of the devices. ‘Until now the use of microfluidics has been limited to specialist groups and we hope very much that this can now be expanded,’ says Cronin. ‘For instance, we are going to start sharing our device designs on the web so other groups can simply download them and print them in their laboratories.’