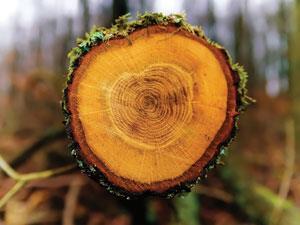 The concept loosely resembles that of tree rings

Inspired by tree rings, scientists have designed a sensing device that records chemical information over time as spatial patterns.

The transformation of time-varying signals into spatially-varying signals is fundamental for recording temporal information. For trees, growth rings that form throughout their lifetime provide a historical record of their growth conditions. Now, a team led by Sindy Tang at Stanford University, US, have designed a time capsule to record information about the occurrence of chemical events.

‘This is a creative way of using well-known phenomena for new and intriguing applications,’ says Hongkai Wu, a microfluidics expert at the Hong Kong University of Science and Technology. Indeed, using the concepts of diffusion and precipitation, Tang’s team take advantage of how chemicals move down a concentration gradient to create an autonomous, self-powered device capable of recording time information.

The device consists of a one dimensional porous substrate which is open to the environment on one end and connected to a reservoir on the other. A reactant is loaded into the reservoir and allowed to diffuse through the substrate until it comes into contact with the desired analyte, at which point a precipitation reaction occurs, providing an optical signal. Such a reaction will occur each time that the diffusion front comes into contact with the analyte and, based on the positions of the signals, a time record of when the analyte was present can then be obtained.

‘Ultimately our goal is to use the device to record information about the environment in locations that aren’t easily accessible,’ explains Tang. The team hope that evolving this simple concept will mean they can fabricate devices capable of finding unidentified sources of environmental contamination, or collecting information on downhole conditions when searching for oil.

Immediate efforts will focus on improving the specificity of the reactant towards the reagent of interest, and on developing methods to trigger the release of the timer reactant, and prevent it leaching into the environment.