A flare for gene silencing

Chad Mirkin and colleagues from Northwestern University have made gold nanoparticles covered with short DNA strands that target messenger RNA (mRNA) inside cells. Once they bind to mRNA, the probes release fluorescent ’flares’, allowing the entire process to be visualised in real time. The strength of the fluorescence also indicates how much RNA is present in the cell, so the particles could also be used to measure gene expression levels.

Mirkin had previously established that DNA strands attached to gold nanoparticles would bind complementary strands of messenger RNA within cells - effectively ’silencing’ the gene that produced the RNA and allowing scientists to control processes within the cell. ’Once we discovered that these particles were good at knocking out gene expression, we realised it would be great to be able to monitor the process in real time,’ said Mirkin. ’We wanted to take these particles and use them not just as therapeutics, but as diagnostics for mRNA binding events.’

The nanoflares consist of a fluorescent molecule attached to a short, 18-base nucleotide strand with a sequence complementary to the DNA. The strands are initially bound to gold nanoparticles, which efficiently quench any fluorescence from the flares. Once inside the cell though, the target RNA binds more tightly to the DNA than the flare, which is displaced. The detached flare then starts to fluoresce. 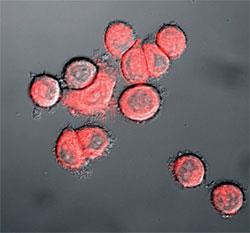 While other probes can detect RNA within cells, the nanoflare has many advantages. Cells actively take up the particles, avoiding the need for microinjection or the use of potentially toxic transfection agents to get them inside. In addition, densely packing the DNA strands on the surface of the gold nanoparticles largely prevents degredation by enzymes, reducing background fluorescence.

Weihong Tan, who researches bionanotechnology at the University of Florida, US, told Chemistry World: ’The ability to detect and quantitate changes in gene expression, especially in real-time and with a degree of sensitivity suitable to the monitoring of minor changes at the single cell level, will have considerable value for biological advances and medical application.’

Mirkin’s next challenge is to impart some selectivity into which cells take up the nanoparticles. Currently, the particles can rapidly enter all cells - not good for targeting a therapy to a particular type of cell. ’The other question is whether we can build particles to carry things into cells that the cell doesn’t like - like chemotherapy agents, or siRNA. A sort of Trojan horse strategy.’