A golden future for hydrogen bonding 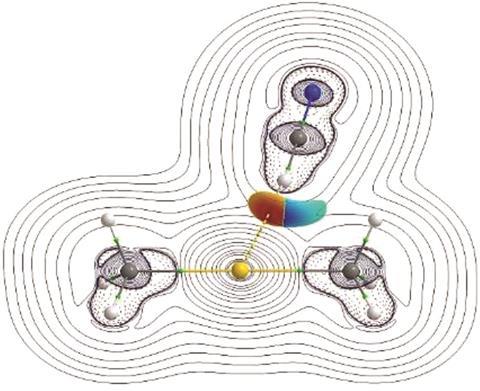 Catharine Esterhuysen and her colleagues at the University of Stellenbosch, South Africa, used theoretical calculations to study how dimethylaurate interacted with six hydrogen bond donors including HF, HCN and NH3. This study expands their previous work showing that Au(I) can be a hydrogen bond acceptor for water.2 Strong or moderate hydrogen bonds were found for five of the pairs. As expected, the Au(I)···H–X bonds were weaker than those formed with the negative auride ion, but surprisingly the bonds with HF and HCN were more stabilising than their analogues with [(CO)4Co] –, which contains a negatively charged Co– centre.

‘We had thought that we would find that silver underwent similar interactions, but it is clear that the ability of Au(I) to act as a hydrogen bond acceptor is unique among the group 11 analogues,’ says Esterhuysen. Relativistic effects, which are also responsible for the distinctive colour of gold, can explain this unexpected observation. With the d orbital shielded from the nucleus, the d electrons interact differently compared with metals such as silver and copper. When the relativistic effects were eliminated from the calculations, the hydrogen bonds weakened, and in the case of HF, they disappeared completely.

Previous efforts to confirm the existence of Au(I) hydrogen bonds experimentally were inconclusive and some researchers remain sceptical that such interactions exist. Alberto Albinati from the University of Milan, Italy, who studies hydrogen bonding, sees similarities with crystallography studies performed in previous decades: ‘Although this work is well carried out using sophisticated techniques, it always possible to find an interaction if you try hard enough.’ However, Esterhuysen is confident that the results from the three different methods used in their study show that the bonds are real. Other researchers are also excited about the work. Matthias Bickelhaupt from VU University Amsterdam in the Netherlands, who develops computational methods to study chemical bonding, thinks that the researchers ‘are on to a fascinating phenomenon’.

Esterhuysen hopes her work will inspire experimental chemists to synthesise new Au(I) complexes to make use of Au(I)···H interactions in areas such as catalysis and medicinal chemistry.