A mirror for the moon

Researchers have coated an ionic liquid with a reflective surface, making it (almost) suitable for a Moon-based telescope

Cosmologists have long argued that a Moon-based telescope with a parabolic mirror made of a rotating liquid would be ideally suited to studying very distant (and thus very old) structures of the universe in unprecedented detail. Researchers using a chemical approach have now succeeded in creating a liquid based system that comes very close to the requirements for such a project. 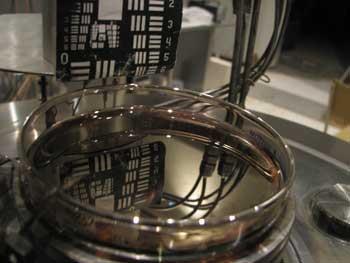 2 inch diameter flat liquid mirror. It is made of an ionic liquid coated with a thin layer of silver. We can see the reflection of a resolution chart in the liquid

Ermanno Borra at the University of Laval, in Quebec, together with colleagues elsewhere in Canada, the US and Northern Ireland, tested the properties of several different types of liquids and identified a commercially available ionic liquid, 1-ethyl-3-methylimidazolium ethylsulphate, as the most promising candidate. They spray-coated the surface of this liquid with silver, and found a much-improved reflectivity in the relevant infrared wavelength range compared to silver-coatings on other types of liquid, such as polyethylene glycol.

Borra and colleagues analysed the surface of the silver-coated ionic liquid and found colloidal particles in the size range of a few tens of nanometres. Hypothesizing that this was the reason why the reflectivity wasn’t quite as good as in pure metallic silver, they changed their recipe to include a layer of chromium before applying the silver. The resulting double-coated liquid proved such a success, concluded the researchers, that only technological fine-tuning remains.

Similarly, the melting point of the commercial ionic liquid used as a base isn’t quite low enough to ensure the material stays liquid at the ambient temperatures of the moon. The researchers, among them Pete Worden, director of Nasa Ames Research Center, express confidence that they will identify the optimal level for the lunar telescope among the millions of possible combinations of ions,.

But is this the future of astronomy or just pure lunacy? Paul Halpern, professor of physics at the University of the Sciences in Philadelphia, US, welcomed the proposal enthusiastically. ’It may indeed become economically feasible to establish a lunar telescope,’ Halpern told Chemistry World. ’A giant rotating dish of highly reflective liquid could prove ideal,’ he said. ’A reflector 100 metres in diameter could collect thousands of times more light than the Hubble Space Telescope and potentially image the primordial stars believed to have formed in the very early Universe.’